A polio infection in childhood tied her to a wheelchair for the rest of her life. But despite all physical boundaries, the strong-minded Ratna Indraswari Ibrahim became a famous writer and activist. 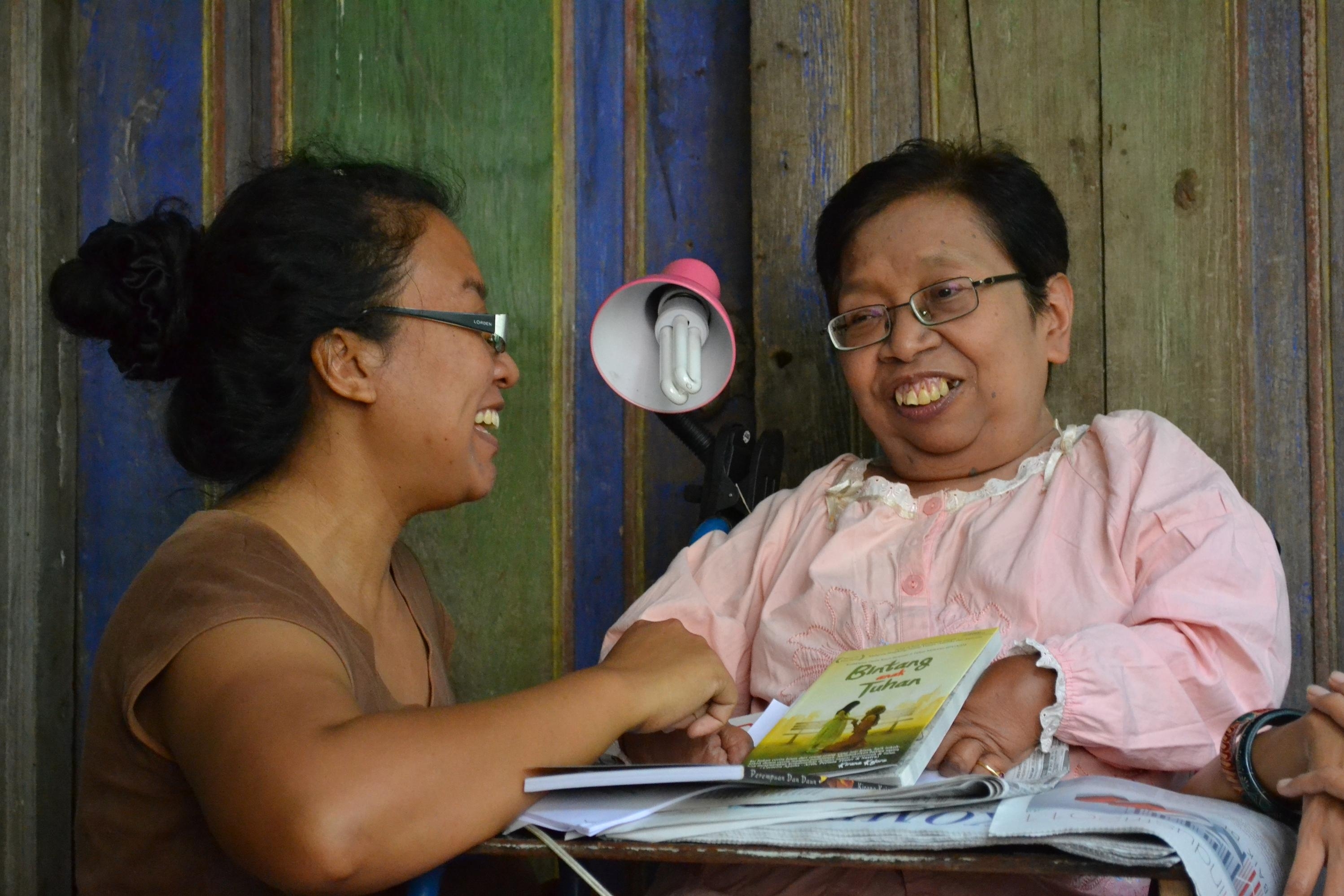 A wavy haired teenager ducks into the alley between the two houses. Soundless, he walks swiftly to the back courtyard. I can see him from inside the house – the small bookstore and library called Toko Buku Kecil – where I’m sitting with Slatem, a young man who works in this shop that was started by Ratna Indraswami Ibrahim, a prolific writer and activist. Slatem tells me the teenager has come to return a book and perhaps borrow another. He is a street kid and loves to read, Slatem says. Most of these kids are too shy to come into the library, especially when there are guests, so he did not come in.

“Mbak Ratna”, Slatem says, “wanted them to always have access to books and asked to let them come to the back rooms.” In Javanese “Mbak” means elder sister. The term is used as an honorific title. Slatem uses it fondly, but he is not related to the novelist. Ratna had turned her living room into a bookstore and library many years before she passed away in March 2011. Slatem manages the store now and is used to interacting with street kids. Among other things, he teaches them to make batik shirts. T-shirts sales help to keep the small bookstore, its library and its services alive.

Ratna was a slight and bespectacled figure in a wheelchair. She wrote poetry as well as over 400 short stories and novels. A vast number was printed in newspapers and magazines. Admirers of her stories are of all ages and many nationalities. When she was still alive, many of them came to meet her – some to learn the art of writing, some to exchange ideas, others just to enjoy her company. Ratna welcomed them all.

Apart from being a writer, Ratna always fought to improve the life of the marginalised and those living with a disadvantage. It may have been personal experience that opened her heart towards their plight; or it might have been a need of inspiration for her stories. But in fact, “Mbak Ratna” herself was an inspiration to many communities. Ratna used to tell A Elwiq Pr, her close friend and editor: “We must excel”. The “we” according to Elwiq, were the men and women whom Ratna found struggling with personal handicaps.

Born in the hilly East Java city of Malang on 24 April 1949, Ratna was fifth in a family with ten children. She was a lively child with a strong will of her own, climbing trees and always ready to play a prank. At the age of nine, she contracted a rare polio disease, rachitis. It hampered growth of her lower body and extremities. She fought the condition, but was forced to live with the limitations it imposed.

After a period of home-tutoring, Ratna insisted on returning to school. Support came from her siblings and well-to-do parents, who did their best to help her become self-sufficient. After finishing high school, Ratna enrolled in university, thinking she should strive towards a degree in accountancy. She later dropped out, deciding to pursue a career of writing, a passion she had since an early age.

With great difficulty, Ratna started typing her own manuscripts with two fingers. However, as her strength diminished and her arms weakened, Ratna became fully dependent on support. She developed ideas into stories in her mind, and then relayed them in a finished form to a typist.

Rini Widyawati began working for Ratna at the age of 17. An apt learner, she became Ratna’s typist and confidante. Unfortunately, even good things come to an end. Rini moved to Hong Kong as a migrant worker. She managed to make use of her literary experience however. Today, Rini is a propagator of Indonesian migrant worker literature. Rini helped Ratna publish her first book. Ratna later admitted that she faced writer’s block after Rini left. She overcame it months later, dictating her stories to the close group of friends who rallied around her. Nur Lyla Ratri, a literature student from Ratna’s alma mater Brawijaya University became her last typist.

In the late 70s, Ratna chaired Yayasan Bhakti Nurani, an organisation working with the disabled – and she saw the need to build a chapter of it in Malang. Her close ally Hastari E. Pamintasih says that Ratna would campaign for many things. She wanted doors to be large enough for wheelchairs, she demanded lifts and ramps instead of just stairs in public spaces, as called for sidewalks that allow all people to walk safely down a street. The two friends and their organisation fought for representation and lobbied local authorities. Although often stonewalled, their ever growing group kept pushing – pointing out that Indonesia had ratified the UN Convention on the rights of the disabled in 1974.

Hastari still gets teary eyes when talking about Ratna. She remembers her “mentor” rejecting the world “disability” and insisting on “diffability” instead. “Ratna said that we are not disabled in the sense of being unable to do anything, our abilities just differ from those of others,” Hastari recalls. She limps due to childhood polio.

“How are we supposed to voice our needs, if we can’t even go up the City Hall stairs?”, Ratna once said. In an interview that was published by the daily Jakarta Post in 2007, she jokingly stated that she should start a political party. “There are 10 million disabled voters in Indonesia. Maybe then lawmakers would pay attention”. Ratna knew very well that many diffable persons in Indonesia do not enjoy half of the opportunities she had.

Ratna was actively involved in many public issues. In 1991, she founded the environmental organisation Entropic Malang. When rural communities demonstrated against being driven from their land, Ratna was seen in front of them in her wheelchair. That scene is well remembered and has made something like a mythical hero.

Eko Bambang Subiantoro, a journalist, covered the event for national news. He remembers Ratna and her group bursting out with laughter in that very tense situation. Ratna had complained that the activists were lagging too far behind. Someone responded with the joke that she was lucky to be pushed around fast in a wheelchair, whereas others had to walk all the way. The laughter broke the tension between police and demonstrators.

“Ratna wasn’t just a writer, she had the gift of bringing people together”, says long-time friend and editor Elwiq. “She even brought together people with differing faiths to dialogue. She was a multi-faceted gem.”

“Just being with her is enriching”, Elwiq continues. Both women were among the cofounders of the Pelangi Forum of Scientific Studies. “Pelangi” means rainbow. The organisation promotes women’s education. “Women”, Ratna would argue, “need to break through the patriarchal culture that binds them down. People need the ability, the means to broaden their horizon and to work so as to support themselves.”

Elwiq says that Ratna may have been a profound feminist, but mostly she was a humanist. Although there was never any wavering in her convictions, Elwiq felt a moderation of tone in Ratna’s later years when the writer began to interact regularly with religious authorities. She visited religious schools, and taught the girls and women there creative writing. According to Elwiq, Ratna found her faith and inner peace around that time. Based on her Muslim faith, she became a strong voice against religious discrimination. The emotional shift is also apparent in her writing. Elwiq maintains that Ratna’s last published novel “1998” is a watershed.

In 1998, a broad popular movement led to the fall of Suharto, the authoritarian president. The book uses the historical events of that year as its dramatic background. It refers to activists and students who disappeared or were killed in Indonesia’s political turmoil, as well as to violence against the Chinese minority in various cities. The novel hinges on the need to forge a nation that allows many different ethnicities and groups to live peacefully on an equal footing.

Mayday eve 2014, Malang. The local chapter of the Indonesian Migrant Workers Union is hosting a four day regional conference. Some 30 persons sit in a circle, others are preparing for the May Day march. In one corner, a young man plays the guitar to accompany an oration.

Those present take turns singing, sharing poetry and relating personal experiences. Bonari Nobonenar, the editor of the regional newspaper Jawa Pos, pays homage to Ratna. She remains the local hero – and a source of inspiration for many people who continue to promote her dream of promoting peace and social inclusion.