Of wolves and men

Chinese writer Jiang Rong caused a literary sensation with his novel “Wolf totem”. Describing the life of the nomads of Inner Mongolia and the destruction of the natural environment by government-led development, his autobiographical epic has become one of the most-read books of all time in China since its publication in 2004. The views expressed in the book have sparked controversial debate. This contribution is part of our Summer special in which we recommend holiday reading in our In Brief section. By Sabine Balk 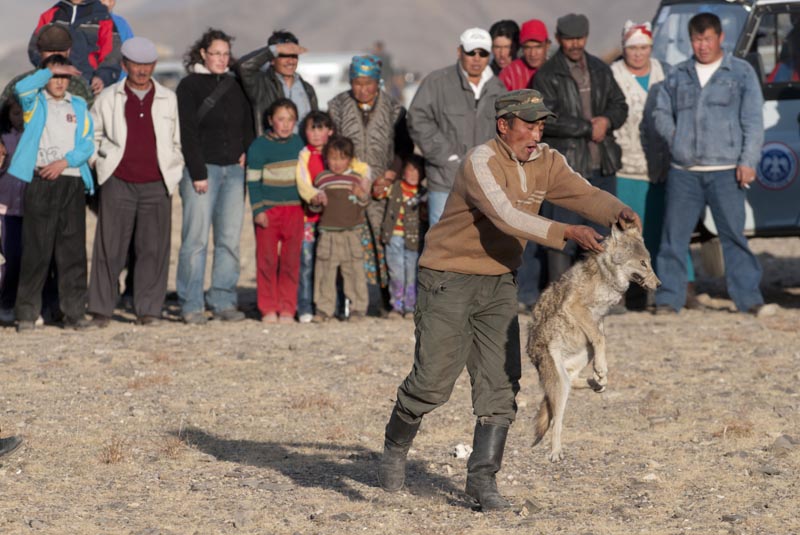 Tipling/Lineair Wolves are not treated kindly in Mongolia. Here, a cub is thrown into a ring to lure eagles at a hunting festival.

The novel is set during the Cultural Revolution in China in the 1960s. Chen Zhen, who studies in Beijing, volunteers to live and work among the nomadic herders of Inner Mongolia, one of five autonomous regions of the People’s Republic. He is fascinated by the Mongols’ archaic pastoral way of life and studies their customs and rites.

One aspect of local life that fascinates him in particular is the nomads’ relationship with the grassland wolves. They revere them as totemic animals and leave their dead out to be eaten by wolves so that the deceased will reach heaven. On the other hand, the people fear the predators that kill their livestock, so they embark on fierce wolf hunts to decimate the packs. Chen Zhen is the alter ego of the author, who himself lived with the Mongols as a shepherd from 1967 to 1978. He witnessed with his own eyes how ancient Mongol traditions were gradually side-lined and supplanted by the modern lifestyle of the Han Chinese majority. The Chinese sought to eradicate wolves from the grasslands in order to increase livestock production. At the same time, China’s economic planners were vigorously driving forward arable farming in the area, which rapidly disrupted the balance of nature.

The book is thus about the age-old conflict between nomads and settlers, pastoralists and crop farmers. The sad consequence of China’s government-led development is that the diversity of the natural environment has been lost, and vast expanses of grazing land are gone. Many parts of Inner Mongolia today are desolate and barren.

Jiang Rong’s sympathies are clearly with the Mongols, who in his eyes display wolf-like characteristics: freedom, independence, tenacity, competition and teamwork. The author’s anthropological pigeonholing of the different human groups is provocative. The Han Chinese, because of their dull obedience and obliviousness to environmental destruction, are described as sheep-like. Unless they assimilate to the wolf-like character of the Mongols, they will always remain inferior.

Jiang Rong’s ideas and thoughts are probably not appreciated by his country’s authoritarian regime. The monumental novel only got past the censors because it was written under a pseudonym. If the government had known the identity of the author, the book would certainly have been banned right away because Lu Jiamin – as Jiang Rong is called in real life – was condemned several times as a counter-revolutionary and spent years in political detention.

In the novel, he does not only outline interesting theses. He is also an outstanding writer. On more than 500 pages, Jiang Rong describes the daily life of the nomads without delving into personal relationships and without psychoanalysing characters. The plot is not complex, but remains tense (almost) throughout the book. Pages and pages are devoted to scenes in which wolves attack a herd of horses at night. The description of the slaughter is so vivid that it makes the reader shudder. Following the attack, the wolves are systematically hunted down in an act of revenge that is every bit as horrific as the wolves’ own predatory assault.

Now 69 years old and an emeritus professor of economic policy, Lu Jiamin regards the fact that his book has not been banned as a big step towards freedom of expression in China. He said so in a rare interview. He is reluctant to engage in public debate about his book because he fears there is still a risk of tighter state control. He does not believe it is advisable to provoke the regime too much. “It takes time for attitudes to change,” he says.