In Uganda, teachers usually keep their huge classes calm by corporal punishment. If enough teachers and teaching assistants are available, one of them stands in front of the class and gives the lesson, and one or two others walk around with canes, ready to punish pupils who talk or seem not to listen. Joy for Children (JFC), a non-governmental organisation, wants them to change disciplining methods.

last contributed to D+C/E+Z in spring 2018 as a social worker who volunteers at the NGO Joy for Children Uganda in Kampala.

last contributed to D+C/E+Z in spring 2018 as the Executive Director of Joy for Children Uganda. 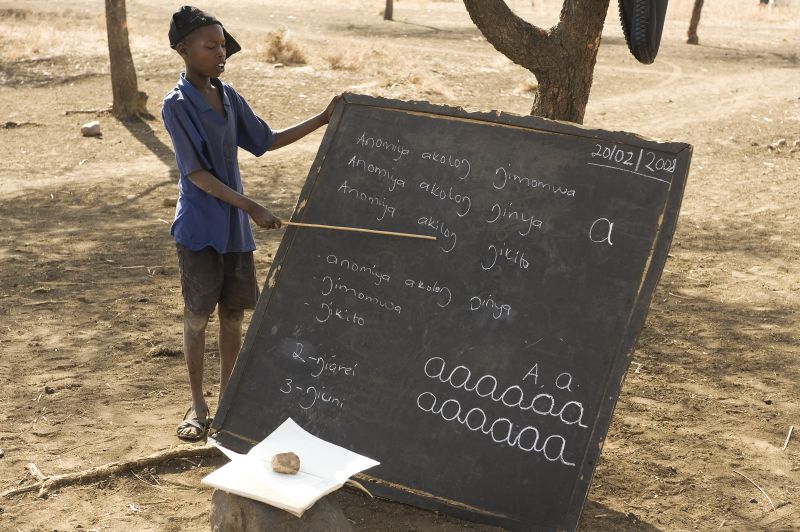 Jorgen Schytte/Lineair In Uganda, the cane the boy uses to show something on the blackboard is often used by teachers to discipline their pupils.

It’s noisy and stuffy in the classroom. About 200 girls and boys have gathered in one room to meet the social workers from Joy for Children. Every second Friday, children in Kivulu Primary School (name changed) in Kampala are taught about their rights. The method used is new to them: participatory teaching. Usually, Ugandan teachers just stand in front of the class, and the kids have to repeat what he or she says. But the social workers of JFC prefer group work and encourage pupils to ask questions. It is not easy to handle such big numbers, but the pupils are very excited about the new topic and eager to participate in the lessons.

Kivulu Primary School is located in one of Kampala’s slum areas. The school ground is dusty, the buildings are basic but decorated with colourful paintings. Like most of the schools in Uganda, the school management is struggling to maintain the institution with the scant funds they receive. Teachers are paid not more than 300,000 Ugandan Shillings per month (the equivalent of about € 80). It is obviously not easy to be a motivated teacher when you have to worry about how to feed your own children.

Nonetheless, some teachers are willing to take new approaches to teaching and disciplinary measures. The head teacher of Kivulu Primary School is one of them. He and several other colleagues are happy to cooperate with the social workers from JFC. He wants his team to be inspired to give “positive” disciplining methods a try.

Every youth in Uganda has his or her own story to tell about corporal punishment. One kid says: “I was a very stubborn child and didn’t even care when the teachers caned me. One day I was caned so badly I could not stand straight anymore.” “Stubborn” is a common expression in Uganda to describe a child who does not obey. Another youth remembers: “I was so afraid of the teacher’s stick, I just kept quiet in class, and I was never caned during my time in primary school.” The proverb “spare the rod, spoil the child” is often referred to in Uganda to give an explanation why children have to be beaten.

While in Uganda corporal punishment is still lawful in the home, a new law was passed in 2016 which prohibits corporal punishment in schools. It clearly states that every child has a right to be protected against all forms of violence including physical and emotional abuse. This is not the first legislative initiative to address violence against children in schools. In August 2015, the Ministry of Education, Science, Technology and Sports issued a “Ban on all acts of violence against children in schools, institutes and colleges”. It stated that violence in schools was outlawed by the Constitution, the Children Act, the Penal Code, the Domestic Violence Act and the Employment Act. It demanded that schools should review their rules and regulations to replace corporal punishment with positive learning sanctions or actions.

However, the major challenge in Uganda is not a lack of laws and policies. Weak implementation is the core problem. Many teachers, especially in rural areas, are not even aware that they are breaking the law when they beat a child. Others have heard about such legislation, but they know that no one will arrest them for caning pupils. The children themselves typically do not know about their rights. That’s why civil-society organisations closely collaborate with schools to teach children about their rights and offer trainings for teachers as well.

At first, students in Uganda appear to be very shy. It seems difficult to get them to share their views. They are simply not used to adults being interested in what they think. But as soon as they realise that it is allowed to ask questions and nobody will punish them or laugh when they share their ideas, it is amazing how active these formerly intimidated children become. And their thoughts are often very interesting. In Kivulu Primary School, corporal punishment was obviously applied on such a regular basis that it became normal to pupils, and they did not even consider it as something wrong or frightening.

Nonetheless, they fast came up with various ideas for alternative disciplining methods like writing an apology letter or doing physical work. However, some pupils preferred being caned to alternatives like cleaning toilets. Considering the condition of the school toilets, that is not surprising. One wonders, however, whether corporal punishment serves its purpose if pupils do not care much about being caned anymore.

Listening and talking to pupils is very important, but training teachers is necessary as well. The teachers of Kivulu Primary School welcome the initiative of Joy for Children. Most of them admitted that they applied corporal punishment regularly, but some of them simply did not know which alternative methods to use. However, some teachers are unwilling to change their methods. They are convinced that caning is necessary to instil discipline in children, and they are afraid that they will not be able to handle their huge classes of 100 children and more without their stick.

Having collaborated with more than 80 schools, social workers from JFC have gained rich experience in introducing positive discipline in schools. While most of the pupils enthusiastically embrace the idea of a “violent-free school”, some teachers complain that pupils threaten them with the police if they continue with caning, and especially the older pupils became arrogant. Teachers feel disempowered. Yet, abolishing corporal punishment does not mean that there won’t be any consequences for misbehaviour at all. Child rights constitute only one side of the coin, responsibilities are their counterpart. The social workers emphasise the importance of explaining to children what is wrong and why. Rather than caning pupils whenever they open their mouth or perform badly in exams, it is better to teach them how to improve.

For many pupils it is harder to write the lines of an apology letter than bearing the stick for a few minutes – but they actually learn something, including how to write properly. This is meant by “positive discipline”. Another way of involving pupils in learning and at the same time increasing their participation in decision-making processes is the establishment of so called pupils’ committees. These committees consist of children who have been selected by teachers and fellow pupils. They act as children’s courts deciding how to deal with pupils who continuously misbehave. In each of the schools JFC is working with, such committees have been founded, but of course their success depends on the level of support given by teachers.

It is nice to see how schools change when pupils are aware of their rights and teachers are willing to adopt new methods. An evaluation conducted by JFC showed that the relationship between pupils and teachers significantly improves. Trusting teachers is particularly important for vulnerable children who are more likely to drop out of school, even before completing primary education. Amongst other measures like introducing counselling and guidance, the replacing of corporal punishment by positive discipline has contributed to decreased dropout rates in the schools JFC is collaborating with.

However, there still is a long way to go until the new law will be fully implemented. And it is insufficient to prohibit corporal punishment in schools only. Some teachers complain that as long as children are still beaten by their parents, things will never change. At home, parents face the same challenges teachers do in school – in families with up to 13 children it is hard to establish a strong bond to each child, explaining always why certain rules are necessary. When parents are overwhelmed, beating seems to be the easier way. With a fertility rate of 5.8 in 2016 (CIA World Factbook), Uganda has one of the highest population growth rates worldwide.

Nonetheless, positive changes are taking place in a visible manner. To enhance progress, it will be important both to maintain the momentum and to strengthen the efforts aimed at ending corporal punishment in schools and homes. More positive role models such as the above mentioned head teacher is what Uganda’s schools need. Inspiring others by demonstrating them the positive effects of alternative disciplining methods can have a tangible impact.

Moses Ntenga is the executive director of the NGO Joy for Children Uganda in Kampala.
https://www.joyforchildren.org

Angelina Henrich is a social worker who volunteers at Joy for Children Uganda.