Provocation is permitted, explicit criticism is not

The repression of the democratic movement in 1989 set back the first comparatively free generation of artists in Communist China by years. Disappointment caused many to emigrate. Others remained and developed a style that is known as “Cynical Realism”. Nowadays, artists are largely free to create what they want, but art that takes on sensitive issues may not be shown publicly.

contributed to D+C/E+Z in autumn 2015. He edits the culture pages for Braunschweiger Zeitung and is an expert on Chinese art. He was recently in China on a grant from the Robert-Bosch-Stiftung. 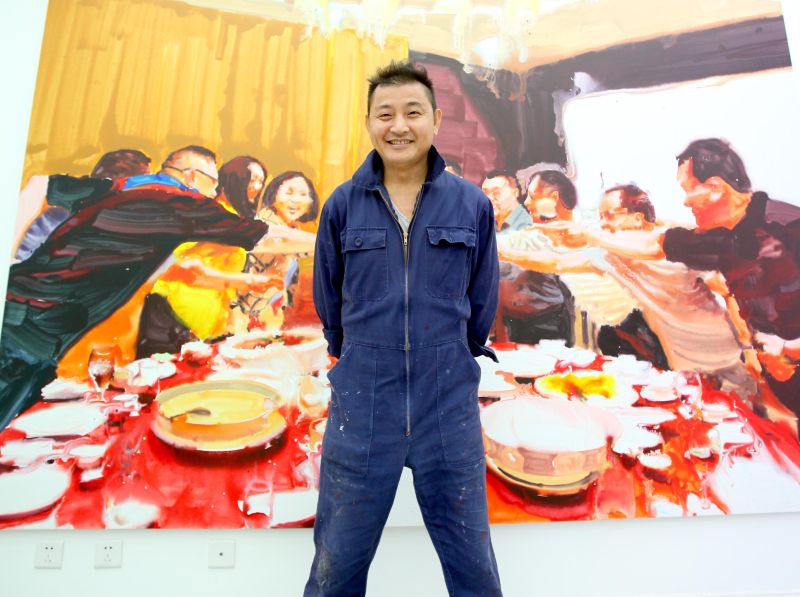 personal photo Wang Cheng Yun in front of a work from his series “The great consumption”.

In the spring of 1989, China’s young artists were on the verge of achieving a breakthrough. For a solid decade, students and academy graduates had been able to experiment and develop, increasingly liberated from Maoist dogma and the strict limitations of an ancient tradition. Painters were inspired by western art and its radical modes of self-expression; they adapted styles ranging from Expressionism to Abstraction to Pop Art.

The idealistic young artists saw themselves as part of a new era, a social revitalisation that was supported by top politicians like Zhao Ziyang, then the party’s general-secretary. Academy graduates were permitted to display avant-garde works at an exhibit hall on Tiananmen Square in Beijing, in the epicentre of power.

However, the exhibition was closed in a matter of days, and only a few weeks later, on 4 June 1989, China’s political leadership under Deng Xiaoping brutally suppressed the pro-democracy movement. The events of 4 June marked the start of a new ice age for artists. Deep disappointment and disillusionment drove some to emigrate, including Li Di (born in 1963), a participant in the Beijing exhibition, and Wang Cheng Yun (born in 1959), a national prize winner from Chengdu. With very little money or knowledge of German, they decided to study western art at the Braunschweig University of Art.

Other artists remained in China, formed new groups in their studios and developed a style, at first half in secret, that eventually became known as Cynical Realism. Images by the Cynical Realist artist Yue Minjun (born in 1962) have become iconic. They feature identical men painted in garish colours, baring their teeth in exaggerated grins. Their excessive, caricatured jubilation has an unsettling effect: in Yue’s hands, the “Land of Smiles” becomes grotesque. His 1995 oil painting “The execution” shows condemned men laughing in front of a mock firing squad. In 2007, the painting was sold for the equivalent of almost € 6 million at a London auction, making it the most expensive contemporary work from China to date.

Other Chinese Pop Art artists have also achieved international renown. They include Fang Lijun (born in 1963), whose striking images are populated by bald men, and Zeng Fanzhi, with his jarring series of paintings featuring people in masks. According to the Financial Times, Zeng Fanzhi is currently China’s richest painter.

The 1999 Venice Biennale was a landmark in the perception of new art from China. Curator Harald Szeemann made Chinese artists a focal point, sparking interest from around the world. Chinese collectors and investors also took notice – and China is an enormous market. According to estimates, sales on the Chinese art market now amount to over € 11 billion per year.

The most commercially successful Chinese artists fetch just as high of prices as the big names from the west. Many painters, sculptors and video artists make a good or decent living. Li Di and Wang Cheng Yun returned to China from Braunschweig in the 2000s. They live at least as well in China as they did in Germany, and they find China’s dynamic and contradictory life more artistically stimulating.

The undisputed centre of the art world is Beijing. Dashanzi 798, a former factory complex, has become a main attraction. Since the mid-1990s, hundreds of artists have established studios there, including China’s most famous contemporary artist, Ai Weiwei. What began as an underground project is now a tourist magnet with dozens of galleries, some of which are quite well known. Another large artist colony is the district of Songzhuang, on the eastern edge of the metropolis, where over 2,000 artists live and work.

In their studios and private spaces, artists (and their buyers) enjoy a great deal of freedom. Censorship is common in the context of public exhibitions, however. The vast majority of museums are under state control. They do not display art that expresses criticism concerning sensitive topics. Even in private galleries, objects are occasionally removed for reasons of censorship. Nevertheless, a visitor strolling through the 798 Art Zone would be surprised by the freedom, radical nature and provocative potential of many of the works. A considerable number contain more or less hidden commentaries on problems in Chinese society, such as environmental destruction, materialism, the one-child limit and China’s dog-eat-dog society. What is rarely found in publicly displayed works, however, is explicit criticism of the party and the state. Artists who voice such criticism as insistently as Ai Weiwei has done run into problems.

Ever since Xi Jinping rose to general-secretary of the Communist Party in 2012 and president in 2013, pressure on civil society has increased, and that affects artists too. At a cultural congress in the spring of 2015, Xi issued a new guideline to artists, filmmakers and architects. He wants their works to present “correct” and patriotic ideas of history and culture. One ministerial department even encouraged artists to spend time “with the rural population in order to think about their world view”.

Such statements are an alarming reprisal of Maoist ideas and intimidation tactics, says Walter Smerling, who is the director of the Museum Küppersmühle in Duisburg and initiated China 8, a major exhibition which was shown in eight cities in the Ruhr area this summer. Fan Di’an, the president of the Central Academy of Fine Arts in Beijing, was on the board of trustees. According to Smerling, the board discussed some works intensively, but ultimately nothing was censored. Unfortunately, Ai Weiwei decided not to participate.

In order to have a career as an artist in China, it helps to study at one of the country’s dozen or so renowned academies of art. It is hard to get admitted, as many young people apply to study. The technical instruction the students get is considered excellent. Nevertheless, the focus is still on learning traditional techniques as opposed to developing an individual style of expression, says Wang Cheng Yun. He is trying to strengthen this aspect of the curriculum at the academy in Chengdu.

The young, liberated attitude towards art is called “xinhua”. However, there are many artists meeting the continued demand for “guohua”, the traditional style of art, but they don’t all earn a fortune. Others earn a living in the creative economy, working in film, advertising or as designers. Some drive a taxi, or make portraits of tourists.

After a phase that was influenced by western Pop Art, some of China’s ambitious, independent artists have begun to reconsider Chinese art traditions. Huang Min (born in 1975) depicts society’s alienation from its roots by painting garishly dressed tourists who stare into traditional ink brush landscapes. Zhang Huan (born in 1965) paints photorealistic black-and-white motifs from the 1960s and 70s that seem frozen in time: subjects include his literature professor, his first love wearing long pigtails or propaganda motifs. Their ephemeral nature is inscribed in their texture: ash on linen.

Florian Arnold edits the culture pages for Braunschweiger Zeitung and is an expert on Chinese art. He was recently in China on a grant from the Robert-Bosch-Stiftung.
florian.arnold@bzv.de