Most people associate international climate policy primarily with annual UN conferences that tend to deliver feeble results. There is, however, quite a bit of practical project work going on at both national and international levels. Such activities should be more closely linked to development policy, and they should rely on the experience of decades of development cooperation.

last contributed to D+C/E+Z in spring 2014 as an economist with expertise in capacity building in international cooperation. 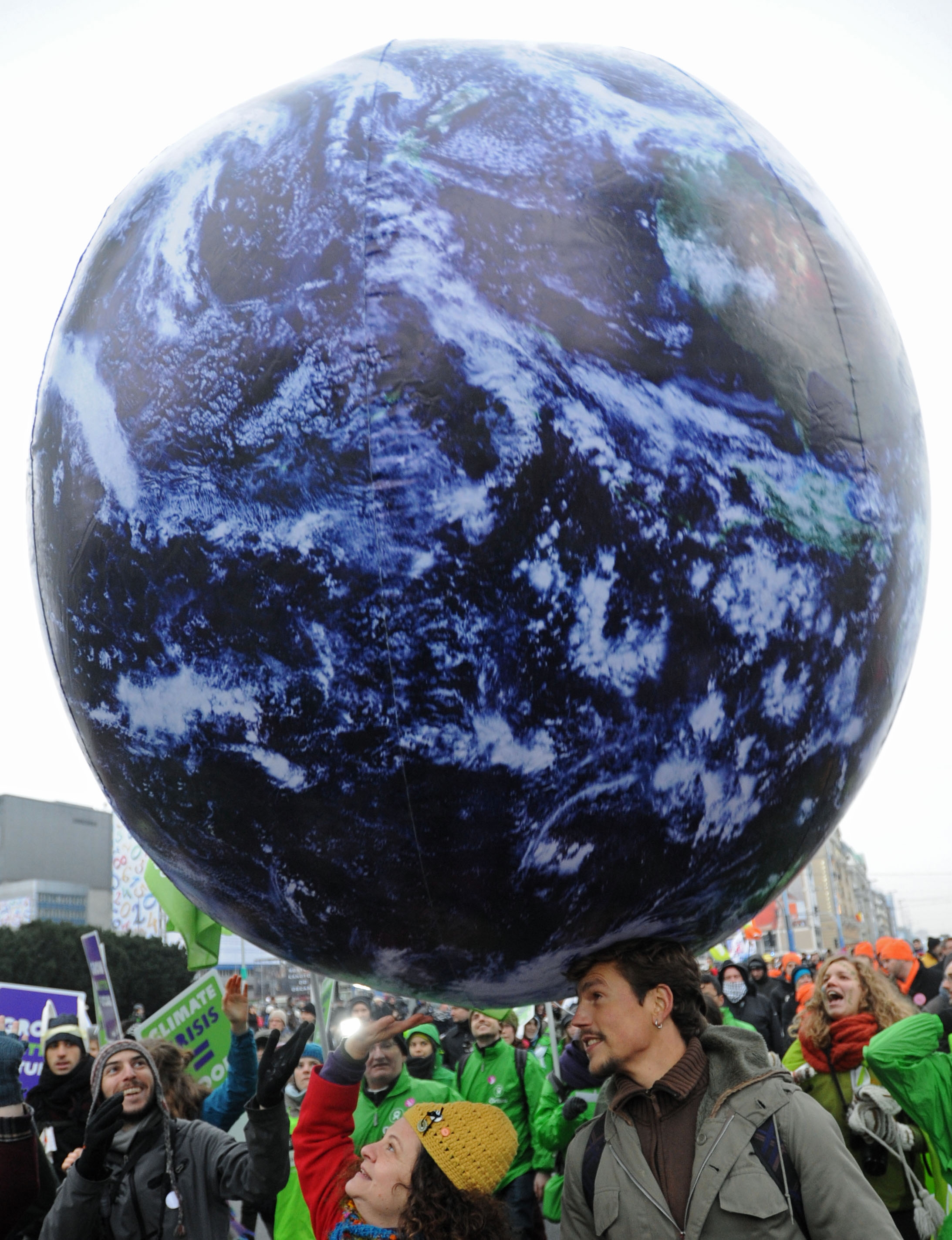 picture-alliance/dpa Environmentalists demand a clean future for the entire planet during the climate summit in Warsaw last year.

"Climate finance" is the term under which projects for reducing greenhouse gases and adapting to climate change are currently being discussed. The focus is on market mechanisms and technology transfer. The latter is certainly necessary, but climate change is nothing that can be dealt with by the use of technology alone. Confining the debate to „climate finance" narrows down the perspective. It excludes approaches that are not based on market mechanisms and it ignores fundamental issues such as lifestyle change.

"Climate finance", moreover, is largely understood as extra funding by the industrialised world, regardless of disbursement modalities. „Climate partnership" would be a better rubric, because this term covers both finance and implementation.

At the UN climate summit in Copenhagen in 2009, the industrial countries pledged to put up $ 100 billion a year from 2020 on in support of developing countries and emerging economies that must adapt to climate change and mitigate its impacts. The governments of developing countries do not consider such money official development assistance (ODA), but expect additional funding. Germany‘s Federal Government announced during the 2012 climate talks in Doha that around € 1.8 billion was earmarked for international climate finance in its budget for 2013 – € 100 million more than one year earlier.

In Germany, international climate-protection projects are managed by both the Federal Ministry for Economic Cooperation and Development (BMZ) and the Federal Ministry for the Environment, Nature Conservation, Building and Nuclear Safety (BMU). In 2008, the BMU created the International Climate Initiative (IKI), which funds climate-related projects in developing and newly industrialising countries. From its launch through to the end of 2013, it helped to get about 400 projects off the ground. The total funding volume was about € 1.15 billion. As in other donor countries, however, many climate projects are financed through ODA, rather than with additional money.

The big question is: how will climate partnership and development policy relate to one another in the future? So far, this issue has not been discussed thoroughly in Germany. At present, various agencies are expanding their capacities, coordinated and harmonised by BMZ and BMUB. Indeed, the Federal Environment Agency (UBA), in an evaluation report, sees the IKI as an extension of bilateral and multilateral development programmes.

The goals of climate and development policy diverge however. Climate partnership must involve not only the developing countries but equally engage emerging markets and transition economies. The focus is increasingly on regional or global measures to protect the climate. Development policy, on the other hand, is about shaping the global order in a way to reduce poverty.

Recent experience shows that the impacts of global warming are undoing successes in fighting poverty. The countries worst hit by climate change are those of the Global South. Obviously, we need coherence of climate and development policy. As a matter of principle, policies in both areas must be compatible.

German non-governmental organisations (NGOs) do not want to see development policy subordinated to climate policy. Climate change is a consequence of the lifestyle and industrial activities in the Global North, so the rich countries are responsible. The NGOs see climate policy as a new field that requires additional resources. For these things to be acknowledged, the NGOs believe that distinction of the two policy fields should be upheld.

At the same time, however, the international debate on the post-2015 agenda is emphasising the idea of sustainable development goals (SDGs) (see D+C/E+Z 2013/07– 08, page 294 f.). Climate change is not explicitly addressed in this context, but it is a core issue by implication. There is nothing wrong with having a diversity of approaches. That serves vibrant exchange of ideas. However, the agendas pursued in climate and development policy cannot simply continue to exist side by side as in the past. They must be not only coordinated, but their performance must be enhanced too. In view of daunting global challenges, we must establish new mechanisms for policymaking.

The developing countries, on the other hand, certainly do not need more foreign actors (each with their own interests). Nor do they need more donor-defined procedures. Indeed, there is a risk of climate projects repeating bad experiences from development projects. It is telling that the evaluations of development projects come to similar conclusions as those of climate projects: the projects‘ relevance tends to be assessed as great, while their sustainability tends to be considered poor.

It is only six years until 2020 – a short time in which to establish a new kind of climate partnership at the international level. Current debate, however, seems to be going around in circles. The industrial countries profess they will honour their $ 100 billion pledge. However, their promises remain vague, and there is no coherent financial programme.

The industrial countries, moreover, make their financial pledges conditional upon developing countries creating monitoring, reporting and verification (MRV) conditions in line with donor standards and requirements. The current state of affairs, with debate often stuck and focused on technical detail, shows that influential players still do not regard the problems as sufficiently pressing.

A great deal of experience has been amassed from development as well as climate projects. There are a lot of studies, academic assessments, evaluations and NGO publications. Based on such knowledge, it is possible to define a vision for a desirable climate partnership in 2020. The general outlines are shown in the box on page XX. Major elements include coherent multilateral action, an end to the fragmentation that results from a multitude of individual projects handled by many different national agencies, and an emphasis on developing country governments assuming responsibility for their nations‘ future.

This kind of vision is a commonly accepted scientific tool. It is plausible, consistent and substantiated. It shows what is desirable and achievable in a medium-range time frame. The vision presented here is based on the analysis of the IKI evaluation and demands made by the NGOs Germanwatch, Climate Alliance Germany and Oxfam Germany.

Anita Mehnert is an economist with expertise in capacity building in international cooperation. She completed a master‘s degree in future studies at Freie Universität Berlin in 2013. She would like to thank Linde Grießhaber (Germanwatch) and Jan Kowalzig (Oxfam Germany) for their support.
anitamehnert@zedat.fu-berlin.de