From boom to bust

Houdegbe North American University Benin (HNAUB) once looked like a promising new private-sector institution, with campuses in Cotonou and Dékanmey. Because of financial problems, it is no longer operational. Karim Okanla, one of its former lecturers, told Hans Dembowski about how HNAUB went from boom to bust. He still thinks that private universities have a role to play in African low-income countries. 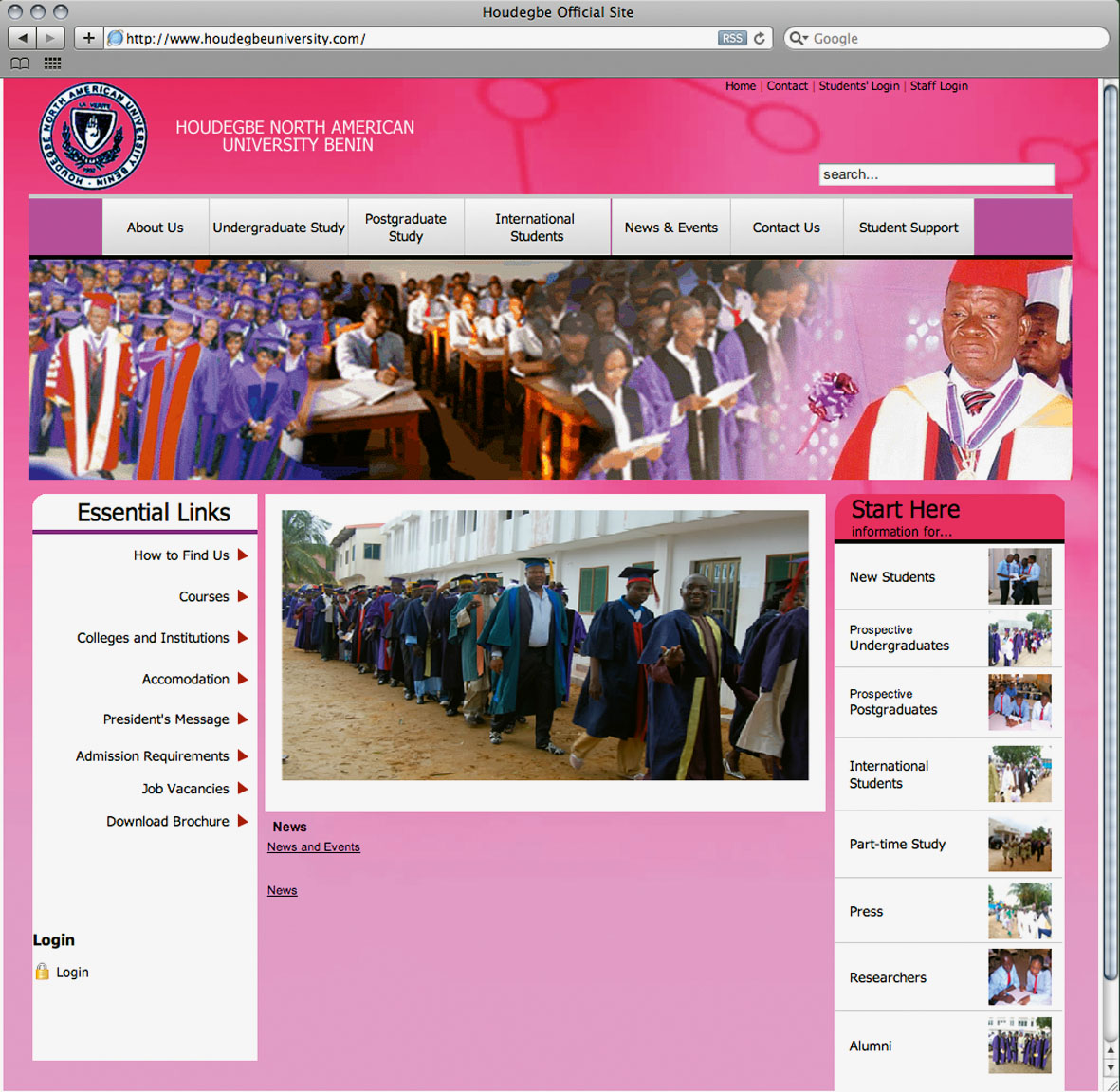 www.houdegbeuniversity.com (inoperable) A screenshot from better days: HNAUB homepage in 2012.

How important are private-sector universities in Benin today?
They are certainly making a difference and account for about 20 % of enrolment in higher education. This sector has been growing fast. An important reason is that public universities are overcrowded and do not perform well. A student who wants to attend a lecture has to be there hours in advance to get a seat, for example. It is unfortunate that business leaders are not impressed by graduates’ skills, so degrees from state universities do not always help people find a good job.

Are private-sector institutions better?
Some are pretty good. One example is the African School of Economics in Abomey-Calavi. It was founded by scholars from Princeton University in the USA. Recently established IRGIB Africa University has a good reputation. The acronym stands for Institut Régional du Génie Industriel des Biotechnologies et Sciences Appliques  (Regional Institute of Industrial Engineering, Biotechnology and Applied Sciences). I currently have a teaching assignment at ESGIS, the École Supérieure de Gestion d’Informatique et des Sciences (University of Management Science and Technology), which is doing pretty well with campuses in Benin, Togo and Gabon. I could name several other schools with acceptable standards. The scenario is confusing, however, because there are many different institutions, and some of them probably do not even have a license. Colleges are not necessarily good just because they are private.

You used to work for Houdegbe North American University Benin (HNAUB), but aren’t doing so anymore. What happened?
The experience was mixed. Things were going well when I started teaching there in March 2010. But unfortunately, HNAUB was poorly managed. It ran into financial trouble. In 2016, lecturers’ pay became erratic. Rumours of insolvency spread like wildfire. The situation kept deteriorating, and it did not inspire confidence that the university wanted tuition to be paid in cash. Cash transactions often serve to avoid accountability, after all. By early 2018, the number of remaining students had dropped to a few hundred, and teaching stopped entirely in the second half of that year. At least two lecturers passed away because they could not afford medical treatment. Many of us had hoped that the situation would improve again, but it did not.

You witnessed HNAUB’s rise and fall. How do you assess its history?
Well, the business idea was brilliant, but unfortunately some courses were substandard. The background is that Nigeria, our neighbour, has a huge population and is comparatively rich. However, it has too few universities to serve the needs of millions of young people who are eager to get a degree. Octave Houdegbe, the founder of HNAUB, spotted the opportunity to provide education to young Nigerians from middle-class families. On average, they paid the equivalent of about $ 1000 tuition per semester, which is a lot of money in Benin. Students enrolled in business and economics courses paid more, and those who stayed in HNAUB dormitories with full accommodation paid still more. In contrast to anglophone Nigeria, the official language in Benin is French. HNAUB was bilingual, but most courses were offered in English. It grew very fast. At one point, HNAUB had some 15,000 students. Most, though not all, were from Nigeria. After the turn of the millennium, the Nigerian economy was growing fast. Oil prices had surged as a consequence of the Iraq war. The finances of HNAUB were never transparent, but it is probably no coincidence that the problems started to grow when Nigeria’s economy was in recession in 2016. What is clear, however, is that Mr Houdegbe ran his university like a family business and was increasingly absorbed by other issues. He is a traditional voodoo chief, for example, and he became a member of parliament. It is well known that election campaigns normally cost a lot of money.

What was substandard?
There were many shortcomings:

So those degrees were probably worthless. Did they help alumni to get good jobs?
The degrees were not totally worthless. The feedback I got is mixed. Some alumni are definitely struggling, others have thrived. To a considerable extent, I think, the latter benefited from their families, for instance by assuming positions in family businesses or getting jobs thanks to connections.

In view of HNAUB’s shortcomings, why did so many students go there? And why did you stay there?
Well, as I said before, there is a market for higher education, and government institutions are not up to the task. Moreover, HNAUB had momentum. For many years, money didn’t seem to be an issue at all. At one point, lecturers like me got a pay rise of 50 %. It made us very happy. We had reason to hope that things would get better. We wanted the university to grow, not only in terms of enrolment but performance too. The institution was generally appreciated. For example, the German ambassador once came to the department of international affairs to discuss international issues with our students. Students, moreover, were impressed by the fact that some lecturers were white people from the USA.

What was the fate of the students who could not finish their studies as teaching stopped?
All they could do was to pack up and go home. They only had their eyes to cry. There is not much point in suing HNAUB. The rule of law is weak in our country, and neither students nor staff are likely to recover any money by taking Mr Houdegbe to court. He is a member of parliament and thus enjoys immunity. Moreover, he is well connected to the political parties that support the incumbent head of state. In our country, institutions do not tend to be strong, and hiring a lawyer often does not help.

What lessons should Benin learn from the HNAUB experience?
First of all, I see this as a missed opportunity. If HNAUB had lived up to its promises – and it could have done so – we would have been training part of Nigeria’s future elite. Instead, the failure of HNAUB has dented Benin’s reputation, at least as far as the affected students and their families are concerned. More generally speaking, I think the big lesson is that education requires very high commitment to the cause. Tuition revenues, for example, must be reinvested in teaching facilities, faculty staff and research. Universities should not be run as profit-maximising businesses, and at very least they must be regulated in a way that ensures that students get value for money.

So you think that Benin’s higher education sector needs reform?
Yes, it does, and government oversight must improve too. However, reform has to be introduced gradually because our capacities are poor and we depend on whatever capacities we have. A few years back, for example, the government wanted to introduce a rule according to which anyone who lectured at a university would need a PhD. That wasn’t viable. There simply are not enough potential lecturers with PhDs for all subjects in Benin. In our country, many lecturers, including myself, have a master’s degree and many years of professional experience. I previously worked for the UN and the World Bank, for example. Policy has to take the existing capacities into account. Change should be based on consensus so it does not cause disruption in this very important sector. That said, there are things that could be done fast. For example, it would make sense to lower taxes paid by private-sector institutions and allow them to import educational goods tariff-free. Benin needs an enabling environment for both private and public universities, so more of them can start to meet internationally accepted standards. Things are not different in many other African countries.

Karim Okanla is a media and communications scholar as well as a freelance author. He used to work at HNAUB and now teaches at other institutions, including the ESGIS campus in Benin.
karimokanla@yahoo.com