Donor governments define what counts as official development assistance (ODA). They are considering reforms of the ODA ­system. The best way to boost their own credibility would be to give developing countries a say in the matter.

last shared his views in D+C/E+Z in spring of 2022 as a researcher at the German Development Institute (DIE-GDI). 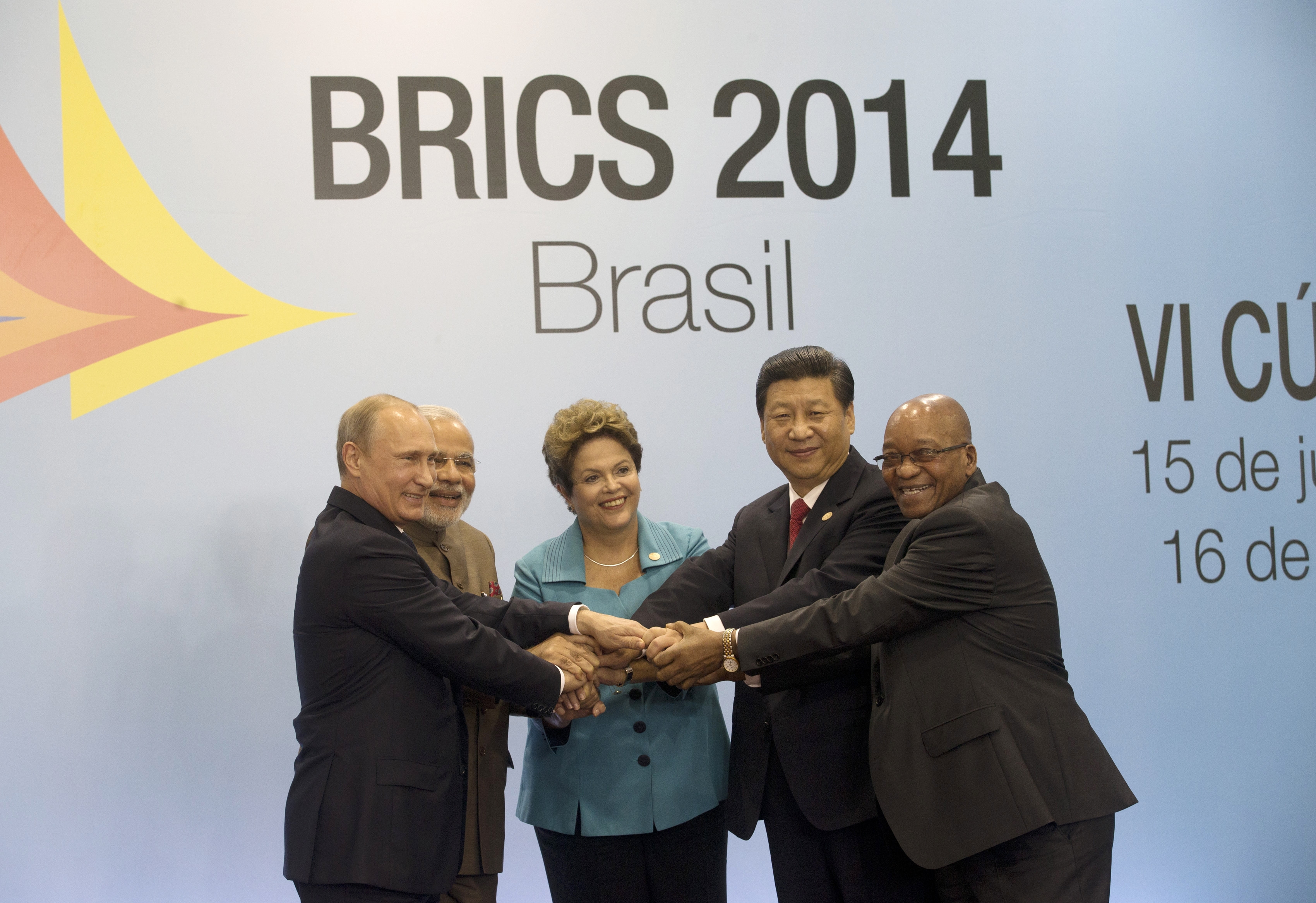 AP Photo/picture-alliance A new development bank was announced at the BRICS Summit in Brazil in July. It will be involved in development funding, but whether it contributes to official development assistance is a totally different matter.

In May each year, the European ministers who are responsible for international development review their public expenditure. This year, it turned out that the EU and its member states collectively spent € 56.5 billion on of­ficial development assistance (ODA) in 2013. That was an increase from € 55.3 billion in 2012, but as a share of the EU’s gross national income (GNI), ODA remained constant at 0.43 %.

This ratio is smaller than aspired. In 2005, the EU and its members had promised to collectively spend 0.7 % of European GNI on ODA by 2015. To live up to that pledge, Europe would have to provide about € 96 billion in ODA next year. It is utterly unrealistic to expect such a huge funding gap to be closed so fast. Nonetheless, the ministers issued a joint communiqué, cryptically reaffirming all “individual and collective ODA commitments”, while “taking into account the exceptional budgetary circumstances”.

Other members of the Organisation for Economic Cooperation and Development (OECD), which unites the world’s economically advanced nations, haven’t fulfilled ODA promises either. The credibility of OECD members in this area is therefore at stake. What should happen after 2015 needs to be discussed too. After all, funding will be needed for the agenda that will replace the Millennium Development Goals, and ODA will play a part. As an input to this debate, this article will first offer a brief history of ODA, then consider what is reported as ODA, and then look into the broader issue of global accountability for development.

The history of ODA started in the late 1950s, when the Geneva-based World Council of Churches started lobbying for a dedicated target to increase financial assistance to developing countries. In 1970, after long discussions at many levels, the UN General Assembly agreed that “economically advanced countries” should make efforts to provide 0.7 % of gross national income as ODA.

Initially, donors were supposed to achieve this target by the mid-1970s, but they did not do so. Instead, they continued to “reaffirm” their commitment to the 0.7 % target in various international poli­cy statements. For decades, only Scandinavian countries and the Netherlands lived up to the promise.

It further affects the credibility of the OECD members that they themselves define what counts as ODA. They report their ODA expenditure to the OECD’s Development Assistance Committee (DAC). Currently, the main criterion is that ODA must be public expenditure that is primarily geared to promoting economic development and welfare in a DAC-defined list of recipient countries. More­over, the funds provided must be concessional in character.

Over the years, however, the DAC has accepted some kinds of spending that do not fully meet the ODA criteria. Relevant budget items include the costs of ODA administration, funding for awareness raising in OECD countries as well as support for refugees in OECD countries.

On the other hand, other forms of development finance largely meet the ODA criteria, but are not counted as ODA nonetheless. They include guarantees for private-sector companies that invest in developing countries and tax exemptions for citizens who contribute to charities. Of course, these items feature in national budgets and are relevant in development terms, but they are not considered ODA mainly because they do not immediately result in financial flows to developing countries. Indeed, the DAC currently only accepts guarantees as ODA if they are paid out to compensate businesses for losses. It would make more sense to count the entire budget earmarks as ODA.

The donor governments submit their ODA data annually to the DAC secre­tariat, which subsequently compiles and publishes the statistics. There is significant peer pressure because no country likes to score lower than another country in relation to the 0.7 % target. In the current austerity climate, on the other hand, many governments do not necessarily want to perform significantly better than others either.

The ODA system has other downsides. All too often, statistical considerations (does something count as ODA?) override development considerations (what would be most effective?). More fundamentally, though, what is reported as ODA reflects what OECD governments regard as relevant for development, without taking into account the views of developing countries.


The future relevance of ODA

In spite of some changes over the years, the basic definition of ODA has remained rather constant. One reason why OECD governments have been reluctant to change the definition is that they do not want to be accused of creative accounting. Their track record is unconvincing enough anyway.

Another obstacle is that proposed changes would typically benefit some OECD members more than others, while change requires unanimous decision-making. Accordingly, reform proposals tend to be discussed over extensive periods of time. For example, the USA are in favour of counting as ODA some kinds of military expenditure that serves to stabilise fragile statehood. Most other OECD members, however, do not want to “militarise” ODA.

Multilateral summits have agreed that support for mitigating global warming and adapting to the phenomenon must come on top of ODA. OECD members however have not found consensus on how to define “additionality” and “climate finance”. Their views differ on how to assess these matters and whether to report some kinds of climate finance as ODA.

Another dispute concerns how “soft” a loan must be to qualify as ODA. Some governments argue that a loan is concessional if the interest rate is below the standard market rates, but others insist that is not really concessional. Tightening the current definition would affect the ODA to GNI ratios of those members who have invested strongly in providing concessional finance, including France, Germany and the European Commission. Whether a joint decision on the matter will be taken as expected in October remains to be seen.

Account certainly needs to be taken of what effectively supports progress in developing countries. Many least-developed countries continue to depend on ODA, but domestic government revenues matter even more in most developing countries. Migrants’ remittances and foreign-direct investments drive growth in many countries. Especially in places where development is picking up speed, they tend to be more relevant than ODA. The challenge is to adapt and re-orient ODA.

Another important issue is that global ODA does not include contributions from large emerging markets such as China or India. Nor does it take account of increasingly important non-governmental institutions, including most of today’s large and influential philanthropic foundations.

Apart from all the concerns mentioned above, there is another reason why ODA in its current form is not a good measure of an OECD member’s development friendliness. Their policies on trade, agriculture, migration and many other matters also have a bearing on developing countries. Actions by OECD countries in regional and multilateral organisations also influence international development.

OECD governments understand these challenges. One consequence was the Paris Declaration on Aid Effectiveness in 2005 and the ensuing series conferences up to the High-Level Meeting in Mexico earlier this year. Moreover, the DAC has begun to collect more data on development finance from non-members and has invited relevant parties to contribute to the effort.

With regard to reforming the ODA system, OECD ministers called for the development of a new metric called Total Official Support to Development (TOSD) in December 2012. Recent proposals indicate that TOSD is likely to include ODA and additional expenditure, such as contributions to the provision of global public goods, for instance. ODA would thus not be replaced by TOSD, but rather become part of it. There are serious methodological challenges however. The OECD secretariat had pointed out that public expenditure must be distinguished from private flows that are mobilised (or “leveraged”) by public expenditure. As yet, there have not been any conclusive decisions.

The DAC will certainly continue to play an important role in reporting ODA as well as other development-relevant financial ­disbursements. Its contributions to the global development agenda will therefore matter very much. To strengthen the legitimacy of the system, the OECD governments should not only reform and adjust what is reported and how, but also improve the reporting system itself. The system still is too inward-looking and stifled by the need for consensus. The focus should shift from recording what OECD members report to what the receiving countries consider relevant support.

The OECD should go beyond soliciting views. It should give developing countries a say in decisions on ODA-related matters. Such a step would boost the OECD’s credibility and increase pressure on China, India and other emerging markets to become part of the system.

More generally speaking, however, ODA reform should be made part of a wider and concerted discussion on establishing an international account­ability system for contributions to global development. In the post-2015 context, Ban Ki-moon, the UN secretary-general, has called for a “participatory monitoring framework for tracking progress and mutual accountability mechanisms for all stakeholders” as an essential building block of a new sustainable-development agenda.

It would make sense to turn ODA into a key element of such a decentralised and interconnected reporting system that monitors what relevant stakeholders do to promote development. That system would also have to keep track of other key ingredients such as contributions from private actors, non-governmental organisations as well as governments that do not belong to the OECD. The UN has the global legitimacy to manage such a system. The most logical setting for such a dialogue would be the High-Level Po­litical Forum that was created by the 2012 UN Conference on Sustainable Development, which convened for the second time in July this year and is in the process of operationalising its mandate and place in the wider UN system.

Niels Keijzer is a researcher at the German Development Institute (DIE-GDI).
niels.keijzer@die-gdi.de