A number of low- and middle-income countries are making efforts to get children and young people more involved in politics. In Latin America, for instance, there is a trend to allow youngsters to vote at 16. There and elsewhere, research shows that it pays to involve young people in politics and decision making at an early age.

last contributed to D+C/E+Z in autumn of 2021. He is a professor of public law and director of the Institute of Development Research and Development Politics (IEE) at Ruhr University Bochum.

last contributed to D+C/E+Z in autumn of 2021. She heads the education desk at Germany’s Federal Ministry for Economic Cooperation and Development.

contributed to D+C/E+Z in autumn of 2021 as law student and student assistant at the Faculty of Law, Ruhr-University Bochum, Germany. 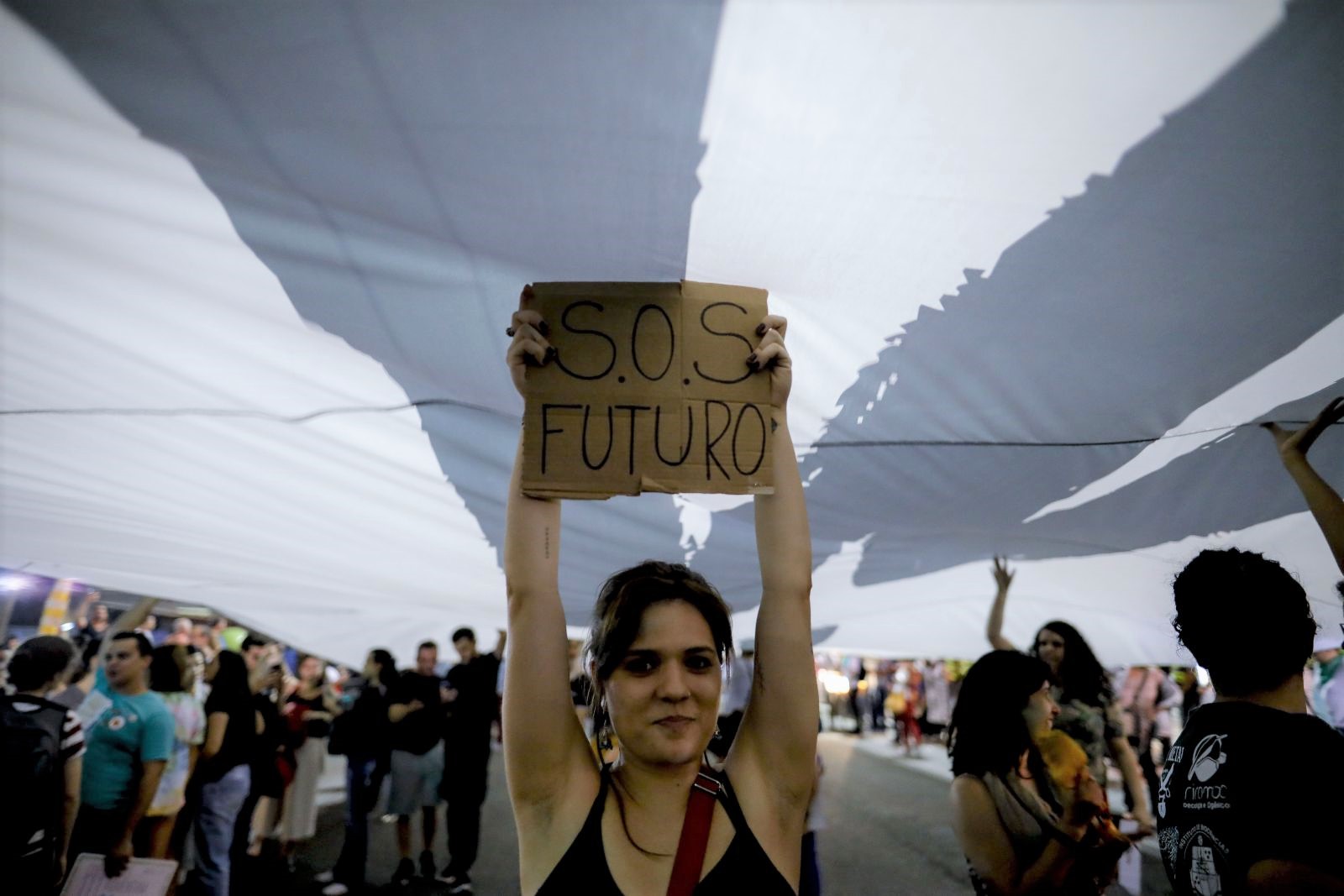 Young people want to have an impact on politics: Fridays for Future rally in São Paulo.

The fact that young people engage in political activity is nothing new. Participation is important to youths – as Fridays for Future protests have made evident in recent years. This global movement proves that adults are by no means the only ones who are able to address pertinent with competence and commitment. Youngsters want to be heard. They want to exert political influence.

Under international law, campaigns like Fridays for Future are protected by the UN Convention on the Rights of the Child (CRC) which guarantees youngsters’ freedom of expression and assembly. But the CRC goes even further. Its Article 12 states that the views of a child should be given “due” weight in all matters affecting that child. Moreover, the UN Committee on the Rights of the Child calls on governments to promote young people’s participation in politics in order to foster active citizenship (CRC 2016).

If governments want young people to participate in politics, one obvious option is to lower the voting age. At present, however, few countries allow under-18s to vote in general elections. Latin America and the Caribbean are the world region with the most countries that embrace youth suffrage. How did that come about? And what can the rest of the world learn from their experience?

The countries where political participation rights are conferred at 16 include Argentina, Brazil, Ecuador, Nicaragua and Cuba – although voting rights are of only limited relevance in Cuba due to lack of democracy and judicial independence. Nicaragua, Brazil and Cuba gave 16-year-olds the vote before 1989. That was the year in which the UN adopted the CRC. Argentina followed suit in 2012. In Bolivia, Chile, Venezuela and Uruguay, youth suffrage is being debated but has not yet been introduced (Sanhueza Petrarca 2020).

One reason for the exceptional developments in Latin America is, without doubt, that a number of right-wing populist dictatorships ended in the region in the past century. By lowering the voting age, the new governments expected not only to boost political participation by young people. They also hoped to gain votes. In Ecuador and Argentina, the introduction of voting rights was clearly inspired by the adoption of the CRC however.

Ecuador, which was the region’s first country to sign the CRC in March 1990, made the right to vote at 16 a constitutional principle in 2008. Local press surveys show that around 60 % of 16- to 17-year-old voters have since made use of this right.

In Argentina, Brazil, Ecuador and Nicaragua, young people consider the following issues politically important: the economy, unemployment, the political situation, corruption, crime and poverty. Like older people, youngsters obtain information from conventional media such as newspapers, radio and television. However, they also make extensive use of the internet and social media.

Any attempt to evaluate the opportunities and impacts of youth suffrage in Latin American countries needs to take account of demographic context. In countries where young people make up the majority of the people, setting the voting age at 16 gives greater electoral weight to the young generation. This is exactly what happened in Latin American countries: lowering the voting age generated considerable numbers of new voters.

At the same time, enlarging the electorate in this way means more participation and more attention for political education. Young people can contribute their views and interests; they can practise political exchange. And they find that their voices become relevant.

Another important finding for a number of Latin American countries was that the right to vote at 16 did not necessarily inspire greater trust in the government. What it did boost, however, was trust in national parliaments and political parties. Allowing young voters to exercise this civic right ultimately reduces feelings of alienation and dissatisfaction. Extending voting rights thus presents an opportunity for promoting greater social cohesion and boosting the legitimacy of state action.

Middle- and low-income countries that allow minors to vote in national parliamentary elections are still exceptions, not the norm. However, observers point to a whole range of other initiatives designed to enable young people to participate in political life.

For example, children’s and youth parliaments have been set up at national or sub-national levels in a number of countries, including India, Pakistan, Nigeria, Rwanda, Zambia, Malawi, Burundi, Mozambique, Tanzania, Ghana, Sierra Leone, Lesotho and South Africa. Such projects not only give young people an insight into parliamentary practice; they also bring them into contact with leading politicians.

In many instances, however, it is not obvious that the countries that have introduced institutions of this kind actually expanded opportunities for political participation. According to the UN Children’s Fund (UNICEF) and the Inter-Parliamentary Union (IPU), children’s parliaments are often just one-off, symbolic events. They tend to have rather little influence on policies or legislation (IPU/UNICEF 2011).

For a youth parliament to deliver real improvements in terms of young people’s political participation, the following conditions need to be met:

The bottom line is that it makes sense to involve young people in politics at an early age. Giving them the chance to practise democratic processes is good for the youngsters themselves and for society in general. Young people are “agents of change”. They will shape the transition that humanity needs for successful implementation of the 2030 Agenda for Sustainable Development. They will do so not only as climate campaigners, like Fridays for Future, but also as advocates for social protection, inequality and poverty reduction, good governance and education.

Moreover, young people’s views and their interest in sustainable development can open up new perspectives. There is scope for new approaches, and the young generation can contribute to taking them. The world should allow them to do so, especially since nearly every member nation of the international community has recognised CRD and the right of participation it confers on young persons.

Committee on the Rights of the Child (CRC), 2016: General comment No. 20 on the implementation of the rights of the child during adolescence. UN-Doc. CRC/C/GC/20.
https://tbinternet.ohchr.org/_layouts/15/treatybodyexternal/TBSearch.aspx?Lang=en&TreatyID=5&DocTypeID=11

Inter-Parliamentary Union (IPU) / UNICEF, 2011: A Handbook on child participation in parliament. Handbook for Parliamentarians No. 18-2011. https://www.ipu.org/resources/publications/handbooks/2016-07/handbook-child-participation-in-parliament

Sanhueza Petrarca, C., 2020: Does voting at a younger age have an effect on satisfaction with democracy and political trust? Evidence from Latin America. In: Eichhorn, J. and Bergh, J. (eds.): Lowering the Voting Age to 16. Palgrave Studies in Young People and Politics.

Markus Kaltenborn is professor of public law and director of the Institute for Development Research and Development Policy (IEE) at the Ruhr-University in Bochum, Germany.
markus.kaltenborn@ruhr-uni-bochum.de

Heike Kuhn heads the education desk at Germany’s Federal Ministry for Economic Cooperation and Development. She is expressing her personal views in this essay.
heike.kuhn@bmz.bund.de