The Bristol based Transform Drugs Policy Foundation wants governments to change their approach. In its eyes, prohibition is counter-productive. As Steve Rolles of Transform told D+C/E+Z, the goal must be to reduce health hazards. 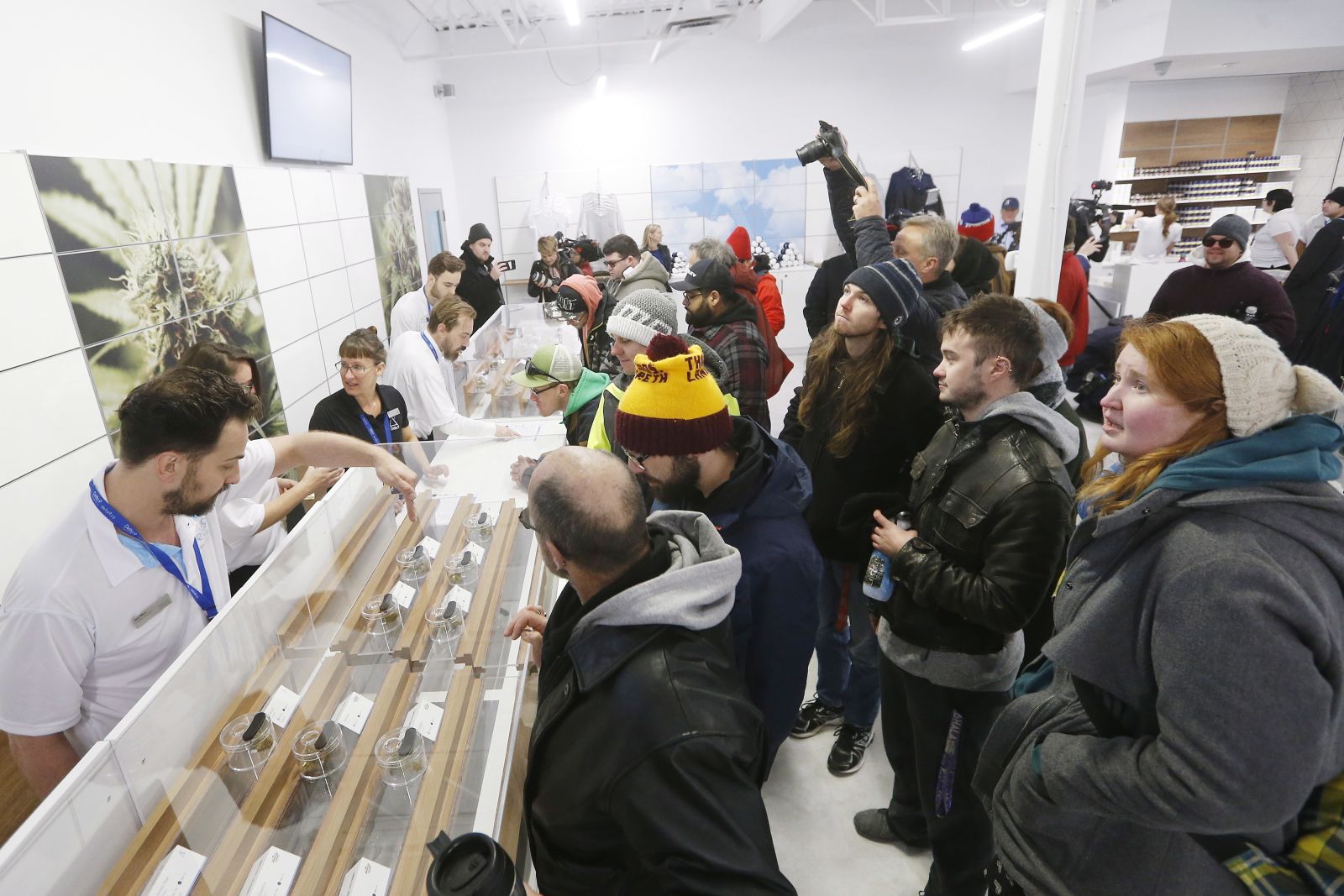 Woods/picture-alliance/AP Photo Shop counter in Winnipeg: cannabis is legal in Canada, but products may not be branded.

The UN Office on Drugs and Crime (UNDOC) does not enjoy undisputed appreciation. What’s wrong with it?
Well, the fundamental problem is that it is an office on drugs and crime rather than one on drugs and health. Alcohol and tobacco are potentially harmful and addictive drugs too, but in the UN context, the World Health Organization (WHO) takes care of alcohol and tobacco policy. Its focus is on reducing health hazards, and it is quite successful. By contrast, the focus of the UNODC, which is essentially a crime and enforcement agency, is on eliminating illegal drugs like opiates, cocaine, cannabis and various synthetic drugs. It’s a fundamental classification error, and things are not going well.

Is there any progress on that front at all?
No, there isn’t. The last time that the UN drug control institutions declared that the goal was to rid the world of illegal drugs was ten years ago, and that was supposed to be achieved within a decade. The truth, however, is that the production of opium poppies has roughly doubled in those years, and coca cultivation has increased by about a third. There are no figures on global cannabis production, but it is assumed that it has risen, alongside rising use. Indeed, we are moving ever farther away from the stated goal of a “drug-free world”. At Transform, we think it is time to admit that the goal is a delusional and potentially harmful fantasy.

Do you have any financial figures concerning the size of the global black market?
It is impossible to get an accurate, up-to-date picture. After all, organised crime groups don’t publish quarterly reports of the kind that multinational corporations are required to do. We know, however, that the biggest profits are made in the advanced economies where most drugs are being consumed. We also know that profits mostly accrue to the top-tier gangsters who largely live in safety and are only very rarely taken to court. They benefit from money laundering and tax havens. The farmers in the production countries and low-ranking actors in the criminal hierarchy live precarious lives.  According to the UNODC, total global turnover generated with illegal drugs is probably between $ 300 billion and $ 400 billion annually.

Let’s put that in proportion: the global turnover of German car makers was about $ 450 billion in 2016. Unlike selling cars, however, selling drugs is illegal. What impact does that have on supply?
It’s a very risky business, so the criminals naturally gravitate towards the most profitable preparations, which also are the most potent and most dangerous. It is not difficult to buy heroin in London, but it is impossible to get opium tea, for example. You won’t find coca leaves either, but crack cocaine can easily be purchased on street corners. Prohibition tilts the market towards the riskiest drugs, but does not eliminate them.

That is basically the same with alcohol, which is prohibited in various predominantly Muslim countries. In those places, there tends to be a keen illegal interest in high-percentage whisky, but low-percentage beer is hardly an issue.
Exactly, and things were similar when alcohol was prohibited in the USA in the 1920s. Under criminal control the market shifted to potent, but profitable spirits. When the ban was lifted, most consumers switched back to drinking beer and wine. Consumers will often actually prefer milder drug varieties if they can get them. This is one reason – though not the only one – why prohibition is destructive. It makes more sense to legally regulate drugs than to ban them entirely. If you apply a higher tax rate to drinks with higher alcohol content, for example, that is an incentive to stay away from the more potent drinks. If governments apply regulatory tools responsibly, they  can encourage safer use of safer products. Prohibition does the exact opposite.

But doesn’t it protect people from using drugs in the first place? Alcohol consumption is forbidden in Saudi Arabia, and Saudis certainly drink much less alcohol than Germans.
Yes, but what does that tell us? The evidence suggests that prohibition can sometimes work so long as demand for a certain drug has not yet been established. Once that has happened, however, prohibition basically means that control of the market is surrendered to organised crime, and even extreme repression hardly keeps a check on it. It is well known that drugs are widely available in high- security prisons. What makes a big difference, however, is the social and cultural context. In line with religious norms, for example, alcohol consumption is generally much lower in predominantly Muslim countries.

Can governments use intelligent regulation to promote healthier attitudes to drugs?
Yes, consider tobacco, for example. Even as illegal drug use has been rising, smoking has become much less popular in Europe and North America in the past three decades. Awareness raising, mandatory health warnings, restriction of advertising, plain packaging, smoking bans in public places, taxation and other measures have made the difference. Society may have de-normalised smoking to some extent, but tobacco smokers and vendors are not criminalised.

But you certainly don’t want to make crack cocaine or heroin available in supermarkets as cigarettes are in the EU?
No, there needs to be a graded approach to regulating drugs – there is no one-size-fits-all solution. Stricter regulation is needed for more risky drugs, and some preparations should not ever be made legally available. For example, crack cocaine would still be prohibited, while cocaine powder might be available to registered users on a rationed basis from pharmacies, and lower potency coca-based energy drinks or coca leaves could be sold in specialty shops. In a similar fashion, doctors could prescribe heroin to people with long-term dependencies, as is already being done successfully in Switzerland and the UK. Less risky opium smoking might be permitted in licensed, membership-based clubs. Cannabis, the most widely used illegal drug, is not harmless, but we now have working models of how to make it legally available. The Netherlands, Spain, several US states, Uruguay, and most recently, Canada have done so. More countries are set to follow. The drugs we are discussing here are very different, and responsible regulation has to take account of all these differences. On the other hand, none of them should be promoted as tobacco was in the past and alcohol sometimes still is. Advertising, branding and marketing should be restricted. Commercial entities want to maximise profits, but the goal of responsible policymakers should be to minimise harm and maximise benefits for people who use drugs, the communities they live in and the markets that service them. Prohibition does not serve that goal, but regulation guided by public health science can do so.

How do you assess the side effects that prohibition has in terms of governance?
First of all, it empowers and enriches organised crime, in turn fuelling corruption and violence. At the extremes, such groups can undermine the security and viability of the state itself. One example is Guinea-Bissau in West Africa. This fragile state has become an important transit country for Latin American cocaine on its way to Europe, and the situation has rapidly deteriorated. Better known examples are Afghanistan, Colombia and  Mexico. In these countries, the drugs economy is undermining institutions and fuelling endemic violence. Peacebuilding and economic development have become extremely difficult. International aid organisations have been trying to promote alternatives to the drugs economy, such as cultivating vegetables or fruit instead of coca, for instance. Even when effective locally, such approaches tend to fail, as the cartels can easily source the commodities elsewhere. The viable alternative to illegal drug crops may be appropriately regulated legal drug crops. We must take into account the wellbeing of millions of marginalised people whose livelihoods depend on what are illegal drugs today.

Has the war on drugs succeeded anywhere?
No, it has not, and certainly not in the sense of making any country free of drugs.

In view of the lack of success, it seems odd that the international community is still largely sticking to this approach. Why is that so?
Part of the problem is that the prohibition strategy was adopted in the 1960s. The relevant UN treaties – some having been drafted in the 40s and 50s – reflect the political priorities of rich-nation governments of the time. The world has changed in social, cultural and political terms since then. Drug demand has expanded dramatically. But the policy foundations of the global response have not evolved. Today, attempts to eradicate drugs are undermining security, endangering human rights, fuelling sickness and death, and making it impossible to achieve the Sustainable Development Goals in much of the world. It is a strange situation. The UN agencies that deal with human rights, health and development are based in Geneva, and they speak about the systemic failings of drug policy. But they are historically disconnected from UN drug agencies, which are based in Vienna and have a bunker mentality. It is clear that major institutional reform is needed. The outdated and malfunctioning UN drug policy must evolve, allowing  member states to explore options for regulated markets. The WHO should be put in charge of drugs with a mandate to deal with them the way it deals with alcohol and tobacco. Drugs are primarily a public health issue and should be dealt with as such.

What difference does it make that Uruguay, Canada and several US states have legalised cannabis?
It basically shows that change is possible and, increasingly, inevitable. The path ahead certainly remains very challenging. Governments are reluctant to admit failure after decades of  populist “drug war” posturing. After so much fear-mongering,  the concept of legalising and regulating drugs seems counterintuitive. The truth, nonetheless, is that the war on drugs has been a disaster and that regulation is a much better alternative for everyone involved – apart from organised crime, of course.

Steve Rolles is a senior policy advisor at the Bristol-based Transform Drug Policy Foundation, an independent think tank and advocacy-organisation. He has contributed to the work of the Global Commission on Drug Policy (see Eleonore von Bothmer in D+C/E+Z e-Paper 2018/11, monitor section).
steve@tdpf.org.uk
twitter: @stevetransform