All weddings are political

As the first country in Latin America, Argentina introduced same-sex marriage in 2010. Argentina’s appreciation of homosexual people’s rights exceeds that of many other countries that legally recognise sexual diversity. Our contributor was one of the activists who campaigned for the reforms.

last contributed to D+C/E+Z in spring of 2018 as a journalist from Buenos Aires. 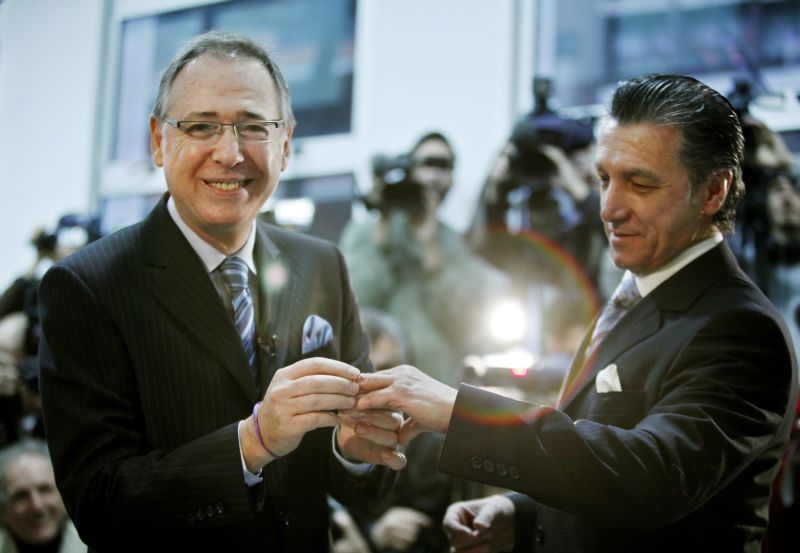 La Valle/picture-alliance/dpa The first homosexual couple who married in Argentina in August 2010.

I never thought I would ever get married. As a child, I didn’t expect to because my parents were never formally married. As a youngster – when I had my first girlfriends – I didn’t, because I rebelled against all conservative institutions, and marriage was one of them. The idea of marrying became completely unconceivable when I began to live my bi- and homosexual love life. There was simply no legal basis for getting married.

But we were the generation to challenge conservative prejudices in theory, on the streets and in bed. On the cold winter night of 15 July 2010, we marched with many friends and activists to the parliament when the Argentinian congress voted in favour of same-sex marriage. Thousands of us celebrated on the square in front of the parliament building. It was our victory after many years of struggle.

According to the Federación Argentina Lesbianas Gays Bisexuales y Trans, an organisation for lesbians, gays, bisexuals and transgender (LGBT) people, more than 9400 same-sex couples got married in Argentina since the reform of 2010. The new law and the debate that preceded it has made it easier for the whole of society to live sexuality and gender identity more openly.

The legal achievement and social change are the result of a “process of democratic construction of individual and collective rights,” says Lucas Arrimada, lawyer and professor at the University of Buenos Aires.

One of the first groups to kick-off this process was the Frente de Liberación Homosexual (FLH – front for homosexual liberation). It was founded in 1973. It did not only promote equal rights for homosexuals, but also campaigned for women’s rights. “Love and live freely in a liberated country,” was one of the slogans.

Later, the lesbians’ organisation Safo branched off the FLH. Both groups were crushed after the military grabbed power in 1976. Most members were abducted and remain “disappeared” to this day. Nonetheless, their early fight for sexual emancipation influenced the course of Argentinian history in important ways.

After the dictatorship ended in 1983, the debate about sexuality and institutions resumed. In 1984, Carlos Jáuregui founded the organisation „Comunidad Homosexual Argentina“ (CHA – homosexual community Argentina). In 1992, the CHA organised the first Gay Pride March in Buenos Aires. Most participants concealed their faces during the rally because they feared repressions at their workplace. One year later, three times as many people took part, and gay pride events were held in other cities as well. Solidarity with and among homosexual people was growing.

Argentina vs the church

During military rule, the Catholic church as an organisation supported the dictatorship. It assumed a crucial role in defining moral standards. Two months after the 1976 military coup, the Argentinian episcopal office published a letter which stated that “in the interest of common good, certain liberties had to be sacrificed.”

In his book “El Vuelo” (The flight), a landmark investigation about the dictatorship, well-known journalist Horacio Verbitsky quotes witness testimonies of priests. He shows that Church officials considered it a “Christian form” of killing to drug opponents of the dictatorship and drop them into the ocean from airplanes. The reasoning was that the victims did not have to suffer.

But after the end of military rule, the socio-cultural process of transformation and its ideological debates challenged the reactionary forces of society, including the church. As an institution, it continued to fight change. In spite of its opposition, the divorce law was passed in 1987. In the past decade, the church focussed on fighting the rights of homosexuals.

Jorge Bergoglio, who was then the archbishop of Buenos Aires and has became Pope Francis in 2013, started what the Argentinian press called the “crusade against gay marriage”. In July 2010, he wrote that a marriage between two persons of the same sex only served “to destroy the plan of God” and was conceived by “the father of lies, the devil”. He requested politicians not to legalise same-sex marriages in Argentina.

Nonetheless, the Argentinian parliament voted in favour of reform. “The course of history defeated him,” comments psychologist Andrea D’Atri of Pan y Rosas, a women’s/LGTB group.

A further debate concerned whether homosexual couples should be allowed to adopt children. The most frequent argument against was that a “real family” consists of a mother and a father. However, that was not even true before the introduction of same-sex marriage. After all, 30 % of Argentinian families consisted of single mothers and their children.

Despite all, marriage is an institution with pros and cons. D’Atri maintains that marriage is simply “a contract”. She says it is necessary to create a society “where all couples are protected by the state, irrespective of their legal status”. The same-sex marriage plays an important role for the societal change towards more rights, “because here the state treats all its citizens equally, thus diversity is socially legitimised,” confirms lawyer Arrimada.

In Argentina, it didn’t end with the same-sex marriage. In May 2012, the law about gender identity was issued. Transvestites, transsexuals and transgender are not considered pathological cases anymore. Transpersons can have the gender of their choice put down in their documents. Operations necessary to match the body to the gender of choice are supported by the health system, by the statutory health insurance as well as the private ones.

But due to discrimination, transpersons still have little access to the work market, although 15 % of them are sole breadwinners in their families. Many have to prostitute themselves in order to survive. Police harassment is frequent. The troubles result in a much lower life expectancy: for transvestites, it is only 32 years – much less then half of the life expectancy of the average Argentine population, which was 76 years in 2014.

Depressingly, homophobic attacks are everyday occurrences, particularly against youth. The city of Mar del Plata is notorious, where a well-known neo-Nazi gang regularly assaults young gay men and gay activists with extreme violence. It is sad that con­servative prejudices are still alive even 30 years after the dictatorship ended.

Nonetheless, the new law and the new rights have created a space of freedom, which will inscribe itself into the cultural genetic code of the nation, into its democratic heart.

A short while ago, I decided to make use of my rights, and I married the man of my choice. This was not a mere political decision, but because I love somebody, and because I love life.

Sebastián Vargas is a journalist and lives in Buenos Aires.
zevu.vargas@gmail.com