Bangladesh is one of the few countries likely to meet almost all of the Millennium Development Goals. The country is still very poor, but it has made spectacular progress.

last contributed to D+C/E+Z in spring of 2022 as a freelance journalist. 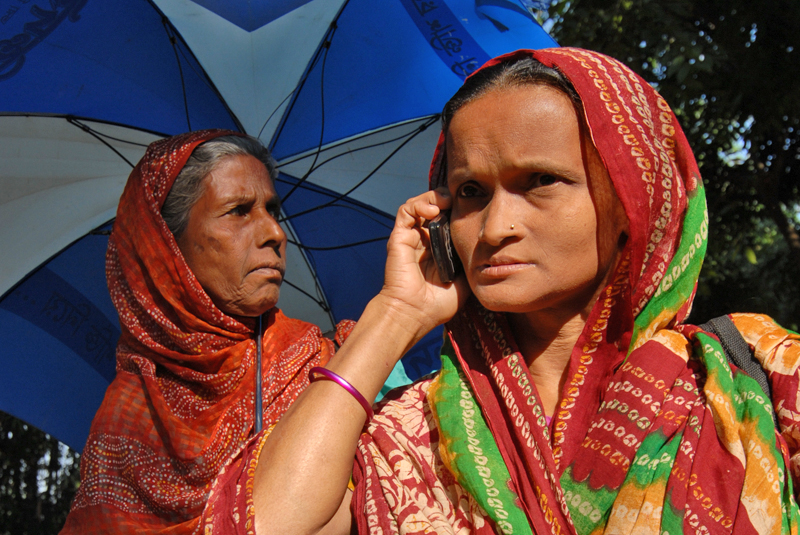 Boethling/Photography Rural women in particular have ­benefited from NGO activism.

One of the most overlooked development success stories of the past decades has been steadily unfolding in one of the poorest and most populous countries: Bangladesh. The little attention the country attracts in the international media tends to focus on floods, cyclones, allegedly deplorable labour conditions in the textiles industry and poor governance. Trans­parency International’s Corruption Perception Index places the country near the bottom of its ranking.

Bangladesh’s reputation of desperate misery is decades old. Henry Kissinger, the influential US Secretary of State in the 1970s, famously derided it as a “basket case”. The international public has barely noticed Bangladesh’s achievements in terms of income levels, food security, industrialisation, health, family planning, education, disaster prevention and the empowerment of women.

Perceptions only began to change slowly at the end of the past decade, when World Bank experts, for instance, noticed the “development surprise”. This surprise results from several factors that cannot be easily replicated:

Bangladesh is a small, but densely populated country. Its culture is unusually homogenous for a developing country: 98 % of its people speak Bengali as their first language, and almost 90 % are Muslim. These characteristics have proven helpful. What works in one village is likely to work in the next village as well – and the next village is never far away. More­over, development workers only need a bicycle to reach many thousands of clients.

Bangladesh became a sovereign nation in late 1971 after a war of independence that left millions dead and destroyed the country’s infrastructure. At the time, the country’s future looked bleak. A whole generation of intellectuals and professionals had been murdered by the Pakistani army, and hundreds of thousands of Bangladeshi women had been systematically raped. Two years later, a devastating famine killed another estimated 1.5 million people. There was reason to doubt that the new nation of 72 million people squeezed into an area of only 143,000 square kilometres had a future. Its population was larger than West Germany’s, but its territory was 40 % smaller.

However, the Bangladeshis were determined to rebuild and develop their country. Massive amounts of foreign aid arrived and civil-society groups and government agencies distributed the assistance to destitute people. A number of important NGOs were started as part of the relief effort (see interview with Zafrullah Chowdhury of the health NGO Gonoshasthaya Kendra in D+C/E+Z 2012/03, p. 126 f.). Some of them, for instance BRAC and Grameen, have become internationally active organisations with world-wide recognition and millions of members.

High-yielding rice and wheat varieties were introduced in the 1970s and 1980s, and the markets for farm-inputs were liberalised. The introduction of various kinds of tube wells and surface irrigation boosted the dry-season rice crop. Rice production steadily increased from 10 million tons in 1972/73 to 34 million tons in 2011/2012. Today, Bangladesh is basically self-sufficient in food.

The war destroyed the country’s small business sector and it took several years until the private sector – including the ready-made garment industry (RMG) – began to emerge (see my essay in D+C/E+Z 2012/12, p. 474 f.). Today, there are around 3000 RMG factories. They export more garments than the textiles sector of any other country except China. Garment exports from Bangladesh were worth $ 24.5 billion in fiscal year 2013/14 and accounted for 81 % of export earnings. The sector provides direct employment to more than 3.5 million people – the majority poor rural women – and indirect employment and income to millions more.

RMG production clearly dominates Bangladesh’s manufacturing sector, but other industries – including generic pharmaceuticals, leather products and shipbuilding – are also gaining strength. Since 2004, two Bangladeshi shipbuilding companies have exported ships worth $ 200 million. Industrial production now accounts for almost 30 % of GDP. A massive flow of remittances from millions of Bangladeshis who live abroad has helped. The World Bank reckons that remittances amounted to almost $ 13 billion in fiscal year 2011/12.After an average annual GDP growth rate of less than four percent a year in the 1980s, Bangladesh’s GDP growth averaged 4.8 % in the 1990s and 5.9 % in the 2000s, according to official statistics. Per-capita income increased by an average of 1.7 % per year in the 1980s, 2.7 % in the 1990s and 4.5 % per year in the 2000s.


Making the most of growth

Economic growth matters, but there is much more going on here. Social development has outpaced rising incomes. With a per-capita GNI of $ 900 in 2013, the World Bank still ranks Bangladesh as a low-income country. The UN lists Bangladesh among the least-developed countries, taking into account additional indicators for education, health and people’s vulnerability to shocks. Nonetheless, Bangladesh is on track to meet key Millennium Development Goals (MDGs).

The share of the people below the national poverty line fell from 56.6 % in 1992 to 31.5 % in 2010. Bangladesh is one of the few countries that are likely to achieve the MDG of reducing infant, child and maternal mortality by two-thirds. It is also on track to immunise 100 % of its one-year-old children against measles and achieve 100 % net enrolment in primary school. Gender disparity has been eliminated in primary and secondary education. The country will meet or has already met most of the targets for fighting HIV/AIDs, malaria and tuberculosis.

In regard to family planning, Bangladesh surprised the world long before the MDGs were even defined. The nation reduced its total fertility rate from 6.9 children per woman in 1970 to 3.3 children per woman in the mid-1990s (see interview with Najma Rizvi in D+C/E+Z 2014/04, p. 146 f.). Experts had believed that such a decline would only be possible in the context of rapidly rising incomes, increased levels of education for women or a powerful non-familial welfare system such as in China.

In Bangladesh, however, the dramatic drop in the fertility rate was the result of strong and persistent government commitment to an innovative, multi-layered programme: Family-planning information reached almost every village in the country through the media, local elites, NGOs and even religious leaders. Contraceptives were widely advertised and made available at low-cost, subsidised prices. The heart of the programme consisted of 23,500 female family welfare assistants who brought health and family- planning information as well as free contraceptives to women in their homes. The assistance was backed-up by clinical services. By the mid-1990s, the Ministry of Health was employing 44,000 family planning personnel – all financed at that time by donor agencies.

The successful family-planning programme is perhaps paradigmatic for Bangladesh’s social development in general. Government agencies and NGOs typically cooperate on implementing comprehensive policies in selected sectors and rely on international funding. It is noteworthy, for instance, that Grameen Bank had received $ 148 million in grants and $ 85 million in loans from international donors by the end of the 1990s. Today, around 2000 development NGOs in Bangladesh are active in education and health services, microfinance and women’s empowerment. Many of them contribute to the spectacularly successful disaster-risk reduction system. Before cyclone Sidr hit the coast of Bangladesh in 2007, some 3.5 million people were evacuated. The storm killed about 3,500 people, but that number has to be put in perspective. A cyclone of similar strength had claimed 138,000 lives in 1991 and the region’s most devas­tating storm of all times left half a million dead in 1970. In view of a growing population and a rising sea level, this kind of progress is very important.

Today, NGOs are crucial to the path-breaking rural solar-energy programme that has brought solar home systems to over 7 million Bangladeshis since 2002. The programme, once again, was initiated by a government-owned company, is promoted by local NGOs and relies on international funding.

Marianne Scholte is a freelance journalist. Her blog about Bangladesh is:
http://www.threadsand­borders.blogspot.de