Like in many other countries in Africa, cancer is becoming a major health threat in Benin. Patients who live in the Cotonou agglomeration and other cities at least have the chance to consult experts. They can turn to doctors in government-run hospitals or – if they have the money – private clinics. Rural people, however, are unlikely to find health-care providers in their vicinity. All too often, ignorance and taboos compound problems of poverty. 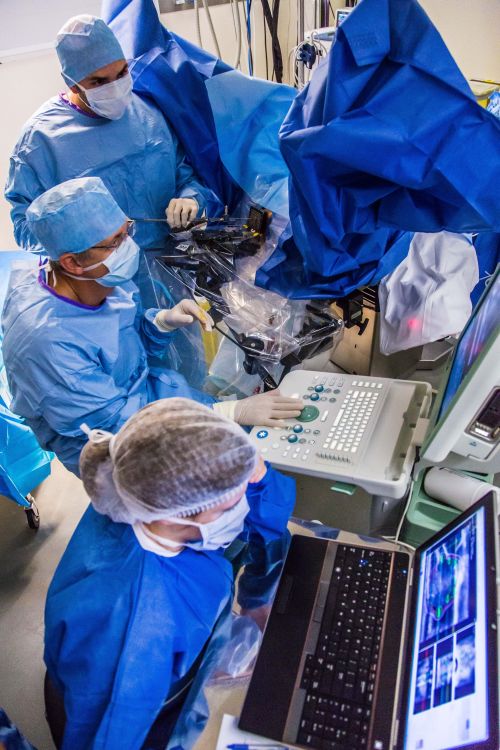 picture-alliance/phanie Those who can afford it, go to Morocco, South Africa or France for up-to-date cancer care: radiosurgery in Paris.

Josephine A. is a 42 years-old food seller in Cotonou, Benin’s most populous city. She has two handsome sons, aged 19 and 16 respectively. Until the last months of 2016, Josephine didn’t have much to complain about. Life in a developing country is full of hardships, but she managed to make do with whatever resources were available.

Josephine was always able to feed her two boys. Paul, her 45 years-old husband, is a carpenter, and he never failed to give her 35,000 CFA Francs (the equivalent of about € 50) at the beginning of every month. She used the money for the upkeep of the family.

One morning, however, Josephine started feeling excruciating pain in her stomach. She took a pain killer, but to no avail. The pain lasted for several weeks. It got worse. Josephine was soon bleeding profusely, even when she was not having her periods.

She did not tell her husband, unsure of his reaction. Rather, she decided to see a gynaecologist, who carried out a cervical smear. But the gynaecologist could not decide exactly what kind of infection it was, so she encouraged Josephine to have her blood tested. Now, Josephine could no longer keep the secret for herself: she confided in her husband, who accepted to foot the bill, no question asked. Eventually, Josephine and Paul were directed to a cancer specialist in Cotonou, who diagnosed cervical cancer.

Perceived as a death warrant

Cervical cancer, along with breast, prostate and liver cancer, is highly prevalent in Benin. Many people here call cervical cancer a death warrant as many have lost loved ones to the disease. The truth is that it often affects women with meagre financial resources who struggle to pay for adequate treatment. If they cannot afford it, their condition is likely to keep deteriorating until they die. Cervical cancer affects young women too.

Breast cancer is similarly dangerous. A recent survey carried out by the Hubert Koutoukou Maga University Teaching Hospital in Cotonou found that it mostly affects women aged between 40 and 45 years. As for men aged 50 or more, they are terribly afraid of prostate and liver cancer.

Depressingly, it is common for cancer patients to be stigmatised in their neighbourhood. They hide from public view and don’t want to be seen as diminished human beings. The good news is that the healthy members of patients’ extended families tend to be quite supportive.

Freddy Gnangnon is one of Cotonou’s few cancer specialists. He says the disease is still taboo in many parts of Benin, especially in rural areas (see box). Many people believe that those who have cancer have been cursed by an angry divinity. In Benin, many people believe in Voodoo and related traditional practices. For some people, disease and death are closely associated with lack of respect for one of the divinities of the Voodoo pantheon.

Another challenge, according to Gnangnon, is that many people think that cancer is incurable. The doctors say patients are afraid of the diagnosis so they only go to see a professional medical expert at a very late stage. At that point, modern medicine typically cannot help anymore.

If cancer is detected and treated at an early stage, it can often be cured. It matters, however, that many patients know they will not be able to afford those cures. Even if they suspect that they have cancer in early stages, an accurate diagnosis does not help them.

Cancer specialist Gnangnon says that scientific research has not shown that cervical cancer is hereditary. It is caused by papillomavirus and is transmitted through sexual intercourse. There actually is an innovative vaccine that helps to prevent it. Unfortunately, a single dose costs 20,000 CFA, the equivalent of half a monthly minimum wage. Sex, of course, is a very intimate issue, and most young girls and women do not ask their parents or partners for money to protect them from cervical cancer.

Access to cancer care is very hard to come by and awfully expensive in Benin. According to Gnangnon, chemotherapy is generally out of reach. Most specifically, a single session of a breast cancer therapy known as Trastuzumab costs 30 times the minimum monthly wage in Benin. Lucky patients recover after 18 sessions, but many patients need more sessions.

Even the cheapest doses of chemotherapy are beyond the reach of many people. Compounding the problems, public-sector health institutions tend to lack the prescribed medication, so patients must turn to more expensive private-sector pharmacies. There is no government policy to provide free treatment to the masses of Benin’s underprivileged people, most of whom depend on insecure employment in the informal sector (see my essay in D+C/E+Z e-Paper 2017/11, p. 16).

According to the above-mentioned university survey, 70 % of breast-cancer patients in Benin only decide to consult a doctor at stages III or IV of the disease. Under such circumstances, the death rate is very high. As in rich nations, one reason people shy away from getting the diagnosis is that they are afraid of the therapy. Breast amputations tend to reduce women’s self-esteem and self-confidence. Chemotherapy, moreover, often makes people lose their hair – with similar results. In a least-developed country like Benin, however, many patients worry as much about not being able to afford the therapies that might help them.

Medical equipment is in extremely short supply. Radiotherapy and nuclear medicine are plainly unavailable in Benin, Gnangnon says. Radiotherapy would help many patients, but the relevant machines are lacking. He laments that he cannot provide this treatment to the patients who come to his private health clinic in downtown Cotonou. Gnangon says that health-care providers sometimes even run out of morphine, which is needed to reduce the terrible pain some patients suffer.

What worries Gnangnon further, is the increasing consumption of alcohol and tobacco by young people. This constitutes, in his opinion, an aggravating factor. Respiratory problems due to toxic fumes and air pollution contribute to the worsening cancer epidemic in Benin.

Patients who can afford to do so go to Morocco, South Africa or France for professional care. They must spend huge sums of money. The treatments often cost several thousand euros. Food-seller Josephine cannot raise sums like that – and her family’s livelihood has become precarious because of her condition. She is increasingly unable to earn money, but she needs ever more money for health care.

If the outlook stays bleak for patients like her, people will keep shying away from getting the appropriate diagnosis early on. Unless people see doctors as soon as they suspect they may have cancer, medical interventions will always come too late. To escape this vicious cycle, Benin needs better health care.