Most people in Benin do not worry much about what kind of energy they use, they worry about getting enough of it. In Nigeria, the country’s giant neighbour, oil wealth has proven to be something of a curse rather than a blessing. 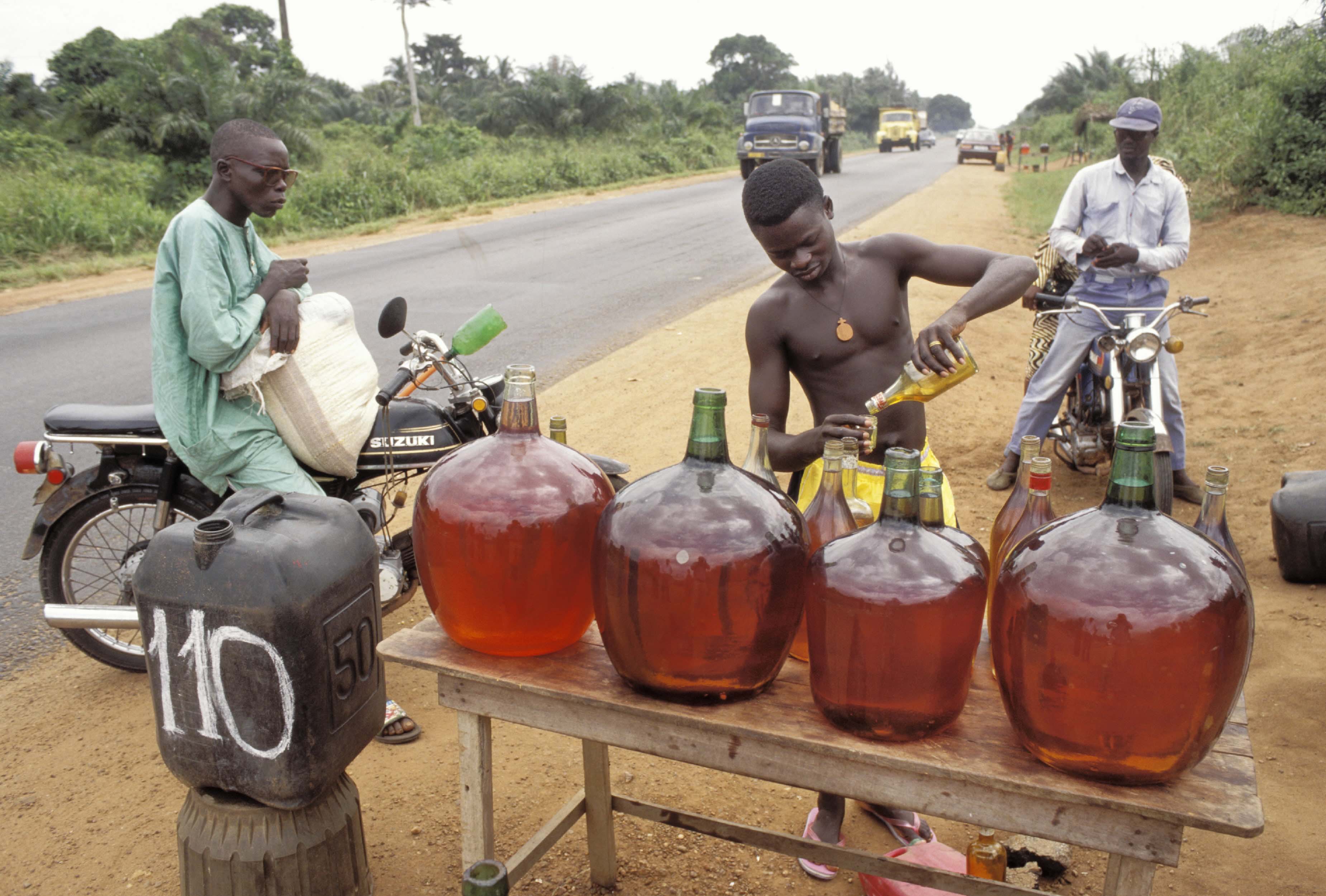 Lineair Smuggled petrol is sold on the highway between Cotonou and Porto Novo.

Power failures mark Benin’s way of life. Sometimes black outs last several days, with no advance notice from the National Electricity Company. Things are often particularly bad between June and September, when heavy downpours and lightening bring the national grid to near paralysis.

Meanwhile, consumers keep complaining of ever increasing electricity bills. An irritated customer, who was about to clear his bills at a National Electricity Company office in Porto Novo, recently expressed his anger: “How can they tell us to pay so much money for undelivered services?”

When analysing a situation, economists often speak of SWOT. These letters stand for “strengths, weaknesses, opportunities and threats”. In regard to Benin’s energy sector, however, only two words stick: weaknesses and threats. The country faces a host of relevant challenges.

The first major constraint, according to the World Bank, is the low electricity access rate. It stands roughly at 24 % nationwide, but it is much lower in rural areas. Supply tends to be in urban areas, though it is not reliable there either.

Second, Benin only has very limited electricity generation capacity. The national grid depends on electricity that is brought in via a single transmission line from Ghana. At times, 90 % of the grid’s power comes from Ghana. In cooperation with Togo, Benin’s western neighbour, the government is implementing measures to reinforce this line. Another, new line has connected Benin grid to the eastern neighbour, Nigeria, but supply from that country is not reliable.

Regional cooperation is certainly making some progress however. The authorities have initiated several small electricity-generation projects in the context of the West African Power Pool (WAPP). Moreover, West African countries are working on a shared gas pipeline. Such initiatives are valuable, but so far, they do not suffice to satisfy Benin’s energy needs.

In regard to fossil fuels, Benin depends on imports. Nigeria is an important partner in this context and is supposed to supply natural gas for generating almost 1500 kW/hours per day. However, Nigeria does not always honour that contract. “Refineries and turbines have been installed, but there’s no gas to keep them running”, laments Justin Agbo, who coordinates Benin’s Modern Energy Access Development Project (DAEM is the French acrnoym). Smuggling plays a role too. As oil-rich Nigeria subsidises petrol for its citizens, fuel is cheap. Illegal exports from Nigeria make up a large part of consumption in Benin.

The subsidy policy is controversial in Nigeria, and the government has tried to end it. However, many people felt that subsidised petrol was the only benefit they got from their country’s resource wealth, and massive protests made Abuja reintroduce the subsidies. The government is now working on phasing them out gradually. It has invested some of the money it is saving in a special fund meant to serve public needs. That fund, however, has lately been accused of corruption.

Nigeria is a huge country with vast oil and gas resources. Experts point out, however, that this resource wealth has in many ways proven to be a curse rather than a blessing. When the oil-rich eastern part of the country claimed independence under the name of Biafra in the late 1960s, a bloody war began which cost at least one million lives. Later, insurgents rose up in the Niger Delta.

All summed up, only a small elite is really thriving on Nigeria’s oil industry, and massive corruption is well documented. The majority of Nigerians remain poor however. The comparative wealth of Nigeria’s predominantly Christian south, moreover, is one reason for discontent in the mostly Muslim north. It would probably be an overstatement to blame all of Nigeria’s issues with Islamist militants on the oil that is produced in the south, but resource extraction is certainly part of the problem.

People in Benin sometimes feel envy in view of Nigeria’s oil. However, they do not want to have the problems that go along with it. Benin is basically a peaceful and stable country, but some people warn that violence could spill over from its giant neighbour.

In any case, energy demand largely outstrips supply in Benin, according to Agbo, the DAEA coordinator. “Benin should bank on hydroelectric dams,” he says. He sees several promising options, but points out that the funds needed to build the infrastructure are not available.

As for renewable energies, solar technology has been receiving strong political and financial support lately from both government and regional institutions, namely the UEMOA Commission. UEMOA stands for Economic and Monetary Union of West Africa. Some rural areas have now escaped darkness thanks to solar power, but there is still a long way to go before all or even most rural communities enjoy the benefit of this technology.

The government of Benin is keen on taking advantage of renewable energies, as President Boni Yayi keeps saying. However, there is little follow-up action, mainly due to the foreign donors’ and foreign investors’ lack of interest. For instance, the authorities have been talking about producing bio-fuels from sugar cane and sugar sorghum for several years, but only small pioneering projects are producing bio-ethanol in the towns of Savalou and Savè. The impact remains negligible.

Wind energy is not left out however. Thanks to Chinese cooperation, an experiment is currently in progress on the coastline, in a fishing area known as “La route des pêches”.

In the future, Benin might use Ocean tides to generate electricity. The potential is there. Benin has 125 kilometres of coastline, with never-ending, furious waves. However, engineers are still working on ways to harness the tides, and so far, the world market does not offer easily available and affordable technology for doing so.

In the short term, another source of energy should be tapped. The countless, gigantic heaps of refuse that dot various parts of the country are being neglected by the authorities. This resource should be made use of.

The sad truth is that Benin relies heavily on traditional biomass fuels such as fire wood and charcoal. Such biomass probably provides 90 % of all energy consumed in Benin and accounts for about 95 % of aggregate household demand. Biomass is in principle renewable, but the massive use of wood and charcoal in households has become one of the drivers of deforestation. Like many other small developing countries, Benin still lacks a sustainable system for the management of natural resources.

The main concern for most people in Benin, however, is not whether the energy they use is clean. They worry whether they will be able to afford enough of it – or at least find enough fire wood.