Sustainability will only be achieved if the world changes fundamentally. But how can a global transformation come true? That question was up for discussion for 700 people from 70 countries, coming from the spheres of international cooperation, business, civil society, research and academia as well as policy-making. 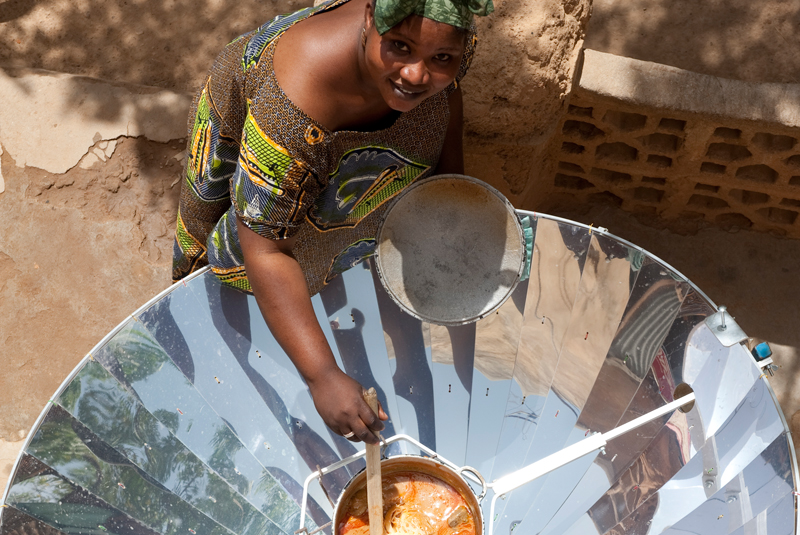 Böthling/Photography Many trees could be saved if all people used solar cookers instead of wood or coal like this woman in Mali.

“Transformation requires thinking differently,” says Su Kahumbu Stephanou. The organic farmer and social entrepreneur from Kenya has established iCow, an agricultural information service, to build small scale farmers’ knowledge and to assist them to improve their production. The service can be accessed by mobile phone or internet. It is cheap and easy to use. The farmers it reaches are young, and a third of them are women. According to Kahumbu Stephanou, agriculture is central to the Sustainable Development Goals (SDGs) that are to be adopted by the UN this year, and change is driven by the young generation. “We have to educate the youth in agriculture,” she concludes.

iCow is a successful example of making a difference in one country, in one sector, in a short period of time. However, a global transformation is likely to take a lot of time. Time that we do not have in the face of global warming, growing land usage, scarcity of resources etc. “We have already reached the boundaries of the planet,” warns Kahumbu Stephanou.

Dirk Messner, director of the German Development Institute, agrees that time is crucial. But he also emphasises that the ideas of sustainability are nothing new: “We started to think about this issue 40 years ago.” The SDGs are a result of that decades long process, he says.

It is recognised that the industrialised countries have to assist the developing world to achieve transformation. Political will is needed, and Tanja Gönner, the chief executive of the GIZ, senses that political will in the international community. After several failed negotiation processes, in the field of climate change for instance, there is now “a strong desire to reach an agreement,” she told a conference her company hosted in Bonn in cooperation with the state government of North Rhine-Westphalia. The title was: “Bonn Conference for Global Transformation 2015: From poli­tics to implementation”.


ODA is not the ­solution

The panellists were not afraid of big words. They agreed that the whole world has to change – quickly, on a large scale and in all spheres of life – if mankind wants to continue to linger on the earth as we know it. Failure is no option: “We don’t need to ask ourselves ‘Can it be done?’ We need to ask ourselves ‘How can it be done?!’,” says Jeffrey Sachs, UN Secretary-General Ban Ki-moon’s special adviser on the Millennium Development Goals, the UN targets preceding the SDGs. Official development assistance (ODA), however, is not the solution to the world’s problems. Even if it was doubled or tripled, it would not be enough. According to Friedrich Kitschelt, state secretary of the German Federal Ministry for Economic Cooperation and Development (BMZ), if all donor nations spent the 0.7 % of gross national income (GNI) they have pledged, that would only amount to five percent of the funds needed for the SDG agenda. In his view, private investments matter more – and so does consumer behaviour. Buying a new smartphone every year or pairs of jeans for € 9.90 is not the kind of consumption we can carry on with, Kitschelt warns.

A paradigm shift in trade policy would be helpful, says Alejandro Litovsky, who advises companies and governments on sustainability issues. He gives the example of fairly traded products that make up a niche market up to now. The Argentinian calls for the voluntary commitment to follow fair-trade principles to be made binding. Companies have to be obliged to, otherwise they won’t apply those prin­ciples, he argues. They must also be translated into national laws and import rules in order to grow in relevance.

Change often starts with small-scale ini­tiatives. If successful, they grow bigger, reaching more people and covering larger parts of the world. The Barefoot College was started by one Indian man, Sanjit “Bunker” Roy, in order to tackle poverty in India’s countryside. It trains poor, illiterate women in solar technology. These women – mainly grandmothers – then electrify their villages.

“Lack of formal education is no bar­rier,” Roy believes. Instead of waiting for education to reach every village of the world, he addresses the poor’s needs in a way they understand. Infographics are helpful. Today, 40 women from 10 least-developed countries undergo the training every six months. Six Barefoot Training Centres have been set up in Africa, and more are to follow. The expansion was made possible by Indian government funding. “By showing what is possible, you can change policy easily,” says Roy.

In two years, the next conference for global transformation will be held. This year will see several multiconferences with great developmental relevance – the financing for development summit in Addis Ababa in July, the SDG summit in New York in September and the climate conference in Paris in December. How much momentum these events will create and whether they bring about the needed para­digm shift, might be up for discussion in Bonn in 2017.