At first sight, Cameroon is the perfect example of an African country which has managed to merge diverse political, historical and cultural backgrounds into one united nation. However, recent tensions in the two Anglophone provinces of the north-west and south-west have exposed the fragility of the country’s political system and triggered a huge crisis. It originates from years of frustration and failed nation building.

last contributed to D+C/E+Z in spring 2019 as a PhD graduate from the SOAS, University of London’s School of Law. He now works as a consultant and a law professor in the DRC. 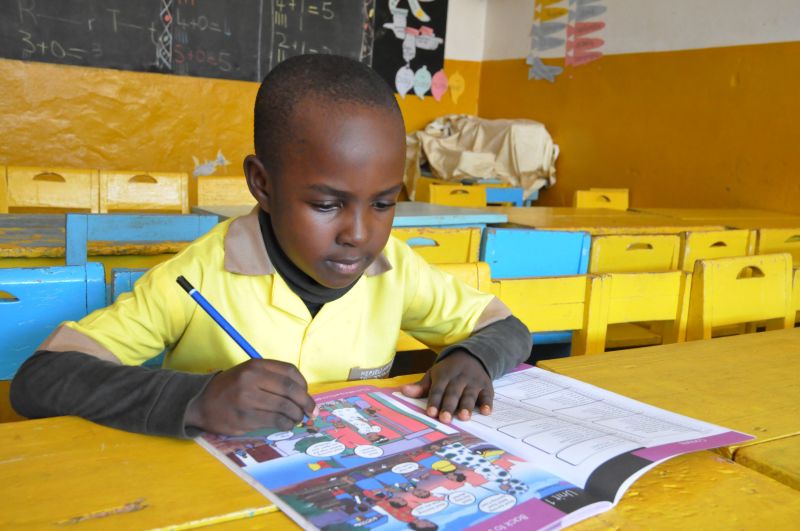 Kepseu/picture-alliance/africamediaonline Cameroon’s education system is dominated by the Francophone majority – sometimes to the detriment of pupils like six-year-old Nguewou Arthur, who is enrolled in the Anglophone section of his school in the capital Yaoundé.

The Republic of Cameroon was established in 1972. It resulted from a full merger of two formerly distinct entities: French Cameroon, which achieved its independence from France in 1960, and the southern region of neighbouring British Cameroon, which voted to join the former in 1961. The arrangement was concluded on the basis of equality and respect in order to promote national unity and guarantee the integrity of the territory. The country adopted both French and English as official languages. Both Civil Law (inspired by the French system) and Common Law (inspired by the British system) are integral parts of its legal system.

Nonetheless, the Anglophone population has always felt frustrated. The people concerned feel that their distinct origin, culture and history have been gradually assimilated by the Francophone majority in the name of national unity. Indeed, the government seems to favour the Francophone lifestyle and culture. Anglophones are denied key positions in the state system and only get deputy positions which do not hold real power. This is even true in the two Anglophone provinces and is also evident in most state-owned companies as well as in the judicial system.

Accordingly, the call for strikes by the teachers’ trade union in November triggered a bigger protest movement. The people in the Anglophone regions used the opportunity to express their anger about the marginalisation and discrimination they experience.

In some places, protests escalated into violent clashes with the police and the burning of tires and the national flag. The government responded with robust repression. Measures included the arrest of opposition leaders. Internet access was shut down in the Anglophone regions.

This crisis is not just a simple dispute between the Anglophone populations and the Cameroonian government. It is the symptom of a more complex problem of governance that affects the entire country. President Paul Biya has been in office since 1982. His attitude is authoritarian. The protests have exposed the huge gap that exists between the central government and a population which does not identify with it. Moreover, there is a feeling shared by a large segment of the population, even including the Francophone section, that the aspirations of the people are not the government’s priority.

Thus, what began as a strike and a list of demands from a certain fringe of the population, has turned into a struggle for true democracy, freedom of expression, the right to a decent life and self-determination. In response, the government should engage in an open dialogue with the people and revise the country’s political system to allow the entire population, both Anglophones and Francophones, to express themselves and flourish freely.

Jonathan Bashi is a PhD graduate from the SOAS, University of London’s School of Law. He now works as a consultant and a law professor in the Democratic Republic of the Congo.