South Sudan was marked by four decades of war and has been embroiled in yet another civil war since 2013. This devastating scenario has affected the country’s entire infrastructure, including water and sanitation services. On behalf of the Federal Ministry of Economic Cooperation and Development (BMZ), GIZ supports the country to improve the infrastructure for supplying drinking water.

contributed to D+C/E+Z in spring 2017. She heads the GIZ programme Development of urban water and sanitation sector in South Sudan.

contributed to D+C/E+Z in spring 2017. He heads the GIZ programme Strengthening local governance and resilience in South Sudan. 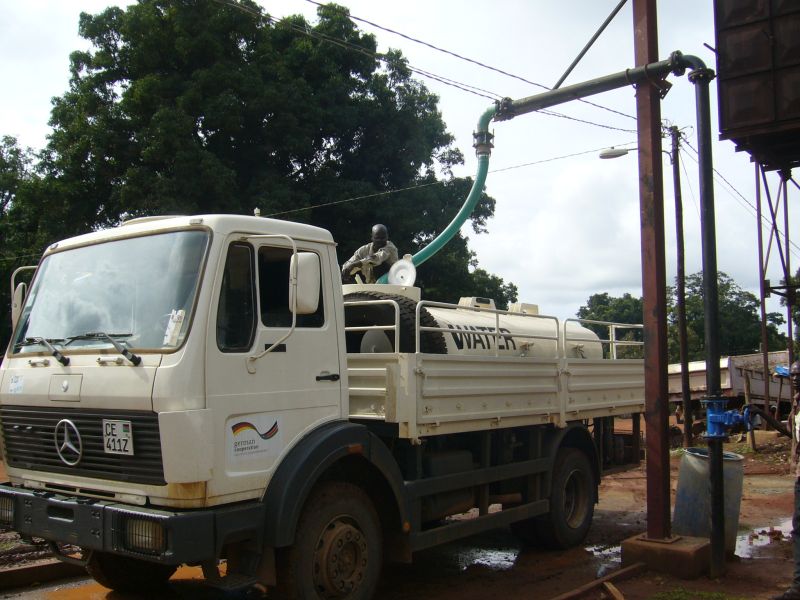 GIZ Because there is no plumbing in much of South Sudan, the drinking water must be brought to customers in tank trucks.

With the peace agreement in 2005 and independence in 2011, it finally became possible to plan and start building a public infrastructure for basic services. More than half of the people do not have access to clean drinking water, and the share of people who have access to adequate sanitation services is even smaller. The recent crisis has worsened the situation further.

The infrastructure for supplying drinking water is underdeveloped in South Sudan, primarily because of the decades of war and the lack of investments. Moreover, the institutional environment is not up to the task. There is an immense shortage of qualified personnel and knowledge at all levels, from the water utilities at local levels up to the national ministries.

In a first phase, GIZ supported important reform efforts at the national level. A strategy was adopted for the water sector. It included drafting legislation to define institutional responsibilities for water and sanitation. According to the Local Government Act of 2009, local authorities are in charge of providing basic services. Moreover, models for a sustainable and professional service provider operating under the local government authorities were piloted at the local level.

Local institutions had to be established. They gained some capacities and were provided with funding. On this basis, the actors involved had to figure out what their new roles were. This was a challenge for everyone holding office in administrative and government bodies as well as for all agencies hoping to support them and the citizens in general. As a first step, service provision models had to be created, with all relevant actors assuming responsibility at the local level. Their interaction had to be rehearsed.

Capacity development on a small scale

Preparing for larger investments, small water utilities were first conceived and established. They are owned by the municipalities of Yei (2012), Yambio (2013) and Torit (2015), but operated as private-sector entities. Since there was no or no fully operational infrastructure, the GIZ developed a new model. It included water kiosks, filling stations and trucks with water tanks. On this bases, local utilities could develop their technical, administrative and financial capacities. In Yei, the GIZ set up an entirely new system. It had two deep wells. The water from these wells was treated with chlorine and stored in a tank. The distribution network included a filling station and nine kiosks, to which water was piped relying on gravity. Tank trucks were acquired in the first crisis of violence in order to be able to supply water to the most vulnerable communities. In Torit, however, there was some derelict infrastructure. It was rehabilitated with funding from KfW Development Bank.

To strengthen local capacities the new model depends on local staff and, when necessary, some external support. Major infrastructure investments were financed by KfW Development Bank under several conditions. The utility had to be legally established and appropriately equipped, for example. Moreover, the utility had to be staffed adequately. Urban development and the pipe network had to be planned properly. To ensure sustainability, moreover, tariffs must be designed diligently. They must cover costs, but they must not make water prohibitively expensive for poor people.

Owning privately operated utilities, the municipal administration set up boards of directors. These boards monitor performance and set strategic goals. Some directors are from government agencies, others from civil society. Successful water supply has boosted the boards’ legitimacy as well as that of local governments. At the same time, the relationship between citizens and the local administration has improved and an understanding of respective roles has grown.

In spite of South Sudan’s current strife, at least 5,000 people in Torit and Yambio still have access to safe drinking water that is provided through kiosks and trucks.

Working at the local level was important in order to achieve two goals:

Jurisdiction over water and sanitary services was decentralised. The strong role of local actors has boosted civic engagement, commitment and institutional resili­ence. That this is true became evident when violence first re-erupted in December 2013. The local structures were able to maintain the small infrastructure systems without the presence of international agencies. Success was not interrupted.

Cooperating with various governmental levels not only helps to expand programmes fast. It also allows for resolving problems at the local level. Feedback from the local level, moreover, contributes to designing long-term models for providing basic services in other sectors nation-wide. For example, the governance model of the water utilities’ boards of directors was adopted in 2016 for locally operated slaughterhouses in Wau, Aweil, Kuajok and Rumbek.

One lesson learned is: Wherever local administrative structures exist, they should be relied on – and supported – in times of crisis. Doing so prevents conflicts, concerning tariffs, for example. Moreover, the sustainability of institutions must be fostered in particular in times of crisis. Existing systems can be expanded or adapted to provide humanitarian assistance. The acquisition of trucks with water tanks has proved useful in this context. They serve to supply water to remote areas as well as informal settlements of internally displaced people. Short-term humanitarian efforts should definitely rely on local partners and the infrastructure they use, wherever possible, and cooperate with them on improving such infrastructure.

Since 2015, the water utilities’ operating costs have skyrocketed due to high inflation and the collapse of South Sudan’s currency. The price of diesel has risen in particular. The envisioned tariff that was both cost-covering and poverty-oriented is no longer feasible in these circumstances. The utilities therefore need international funding. Otherwise, they will have to stop their vitally important services.

The GIZ is currently supporting water utilities in Yei, Yambio and Torit in spite of the ongoing strife. It is providing funding and diesel to ensure water is supplied to the people. Once the security situation improves again, it will be possible to cooperate with local authorities on scaling up the water supply systems. That worked out well in Yei in 2014. Building sustainable institutions for the long run requires a minimum level of stability in regard to the economy and personal security, of course. In countries that, like South Sudan, are plagued by fragile statehood, stamina is needed – as well as the cooperation of all relevant partners in government, private sector and international development to improve people’s livelihoods in the long run.

Both authors are expressing their personal views in this essay.