last contributed to D+C/E+Z in autumn of 2021. She is an associate professor at the Hyderabad campus of the Tata Institute of Social Sciences and the chairperson of its School of Public Policy and Governance. 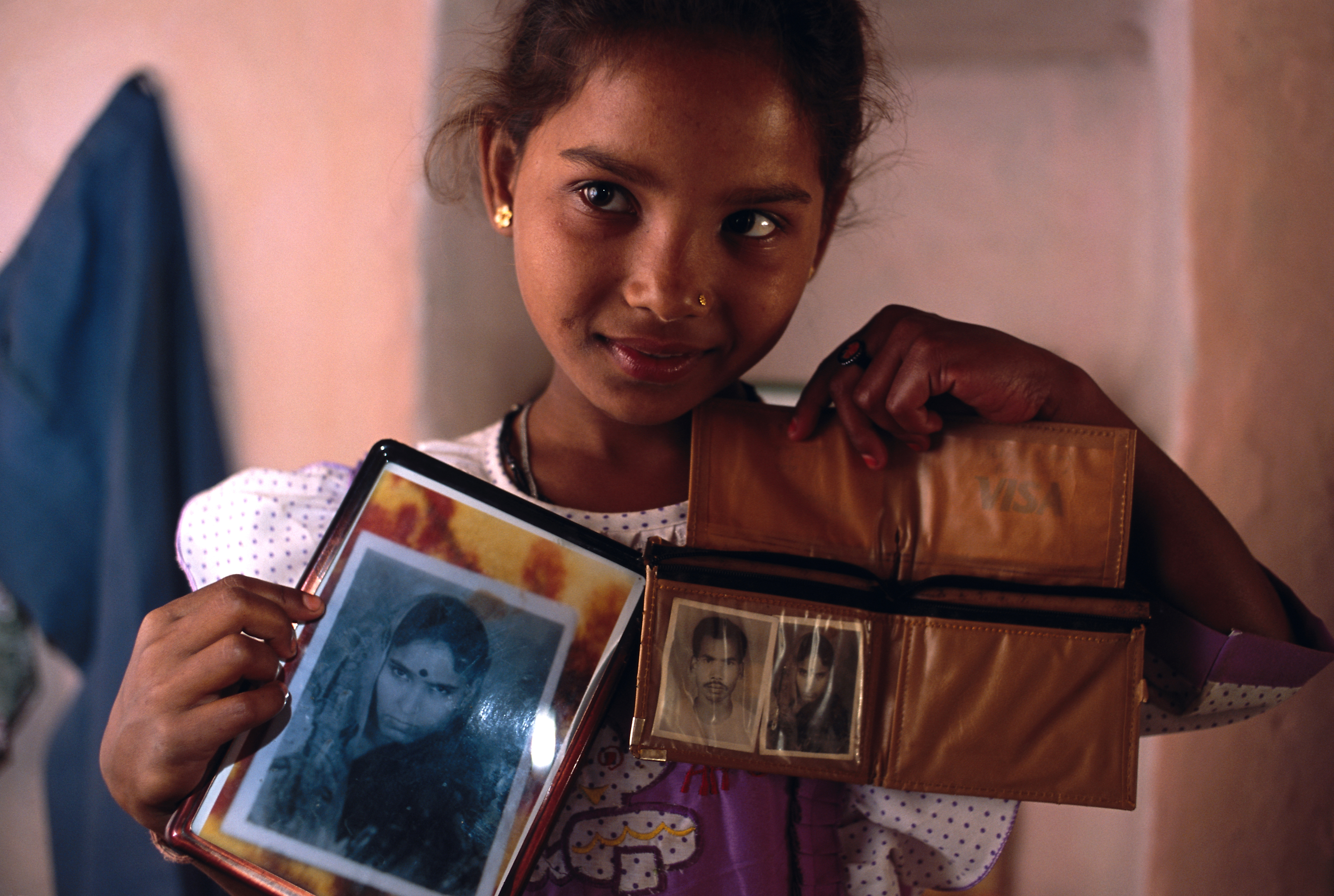 Shehzad Noorani/Lineair A girl showing photos of her mother who died in child birth.

Pregnancy and child birth are normal physiological processes. Nonetheless, about 800 women around the world die of complications arising from the birthing process every day. In 2015, India accounted for about 15 % of the global number. India’s economic growth may look impressive, but in view of such data, it does not mean much.

Maternal mortality is almost entirely preventable. The MMR for Estonia, the world leader, is two deaths per 100,000 births, and Singapore and Greece have an MMR of three per 100,000.

What is needed is good health services. Essential issues include safe institutional deliveries (giving birth in hospitals) in complicated cases, enlarging the choice of safe and reversible contraception and safe options for abortions.

In medical terms, the causes of maternal death include haemorrhage, anaemia and sepsis, obstructed labour, unsafe abortion and others. There are deep underlying socio-economic factors, however. In India, the MRR for the poorest women, who belong to the disadvantaged lowest caste groups and  Adivasi tribes, is two and a half times above the national average.

Especially in rural regions, official statistics show an acute shortage of all kinds of physicians – including obstetricians, gynaecologist and paediatricians. Governmental outreach services, moreover, have largely failed tribal areas. While private services have not ventured into these territories.

Poor rural people are supposed to rely on community health centres (CHCs). These centres, however, tend to be ill-prepared and ill-equipped. They even lack essential drugs. There are too few medical officers and paramedics. The typical CHC does neither has a labour room, nor an operation theatre, nor new-born care facilities.

Not all government efforts have failed. The Janani Suraksha Joyana (JSY) programme has helped to reduce the MMR. It uses cash transfers as incentives so poor families opt for institutional delivery. Moreover, it provides ante-natal, post-natal and other relevant services to women and children. Its emergency system refers particularly complicated cases to better equipped hospitals, and it demands an audit for every maternal death. The JSY has certainly led to improvements in the management of health services.

There are downsides, however. The most important is ironic: too many women now want institutional deliveries, so some of the most complicated cases are crowded out. Given that health services for poor communities are overstretched, it would be better if more deliveries without complications took place with competent midwife assistance. The hospitals simply cannot handle all births.

Another concern is that migrant women lose out. They do not get continuous care because they are expected to  be registered with a single facility as transferring services from one place to another implies complicated paperwork.

The JSY programme comes with conditions, moreover. Its incentives only apply to women above the age of 18 years, though a considerable number of expecting mothers are younger. Adding to the problems, it is only entitled to child-birth services twice, though many have more babies. Women in India’s rural areas actually have very little decision-making power concerning their age of marriage and number of children. Many do not have access to contraceptives. The JSY conditions thus penalise women who are not in control of their fate.

Apart from not having access to contraceptives, many rural women are not well informed about contraceptive options. Some are illiterate. Men, however, tend not to worry about contraception, and leave the matter to women. On the other hand, many women simply have no say in decision-making. Accordingly, there are too many unsafe abortionsShehzad Noorani/Lineair.

The most used means of contraception is women’s permanent sterilisation. In a country obsessed with population control, health functionaries are given targets for ensuring that couples adopt family size control methods. They like sterilisation because it is permanent. However, the basic hygiene standards are not maintained in the facilities. There are infections and sometimes deaths. Government agencies have failed properly to promote less intrusive contraceptive methods such as condoms or pills.

According to UN data, 39 % of the Indian couples that use contraceptive methods rely on the woman’s permanent sterilisation. That is the highest share world wide. Only six percent use condoms. Male sterilisation is hardly done, even though it is easier to perform. Forced sterilisation of men in the late 1970s have left a mark on society, and the trauma compounds its existing pro-male bias.

The socio-cultural dimensions of maternal mortality are striking. Many of the pregnancy related medical issues that make women suffer or even die plainly result from underdevelopment. Relevant aspects include:

These phenomena are rooted in gendered power relations in the family and exacerbated by poorly performing public health services. Poor women need better health care and more control of their fate.

The good news is that after the embarrassing failure to the meet the MDGs, the government seems to be finally waking up. More health workers have been designated for maternal health at the community level and 24 hours call centres for ambulance services are coming up. Technology is being brought to tribal areas, and innovations are being tested. For example, mobile phones and social media like WhatsApp are being used to reach out to more women and stay in touch with them. Databases are being set up to track pregnant individuals’ ante-natal visits.

Civil-society organisations are raising awareness of the issues as well. Some even undertake verbal autopsies to ensure that maternal deaths are investigated properly and everyone can understand what went wrong. The government has become more serious about maternal death reviews too. If the current momentum is sustained and built on, India will become a safer place for women to become mothers.