Loss and damage gets a boost

Poor countries have chalked up a big victory at the Paris climate conference (COP21) in December. Developed countries have finally acknowledged some accountability for damages due to climate change. But much still needs to be done. 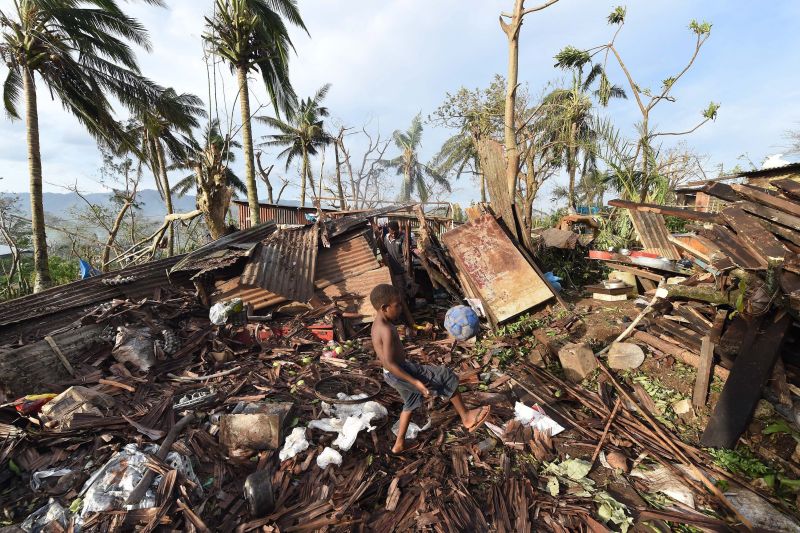 picture-alliance/dpa Many least developed countries are particularly threatened by the effects of climate change. Cyclone Pam left a trail of destruction when it ripped through the impoverished Pacific island state of Vanuatu in 2015.

Least developed countries are often on the front lines of climate-related disasters, and they are also the least equipped to deal with them. The hope is for new financing mechanisms like risk insurance, but calculating the potential cost is a difficult and controversial task.

Nearly 200 countries agreed in Paris that places like the fragile Pacific islands of Tuvalu need ways to cope with so-called loss and damage to property, livelihoods and life. Just several metres above sea level, the tiny collection of atolls and reefs is no match for rising sea levels. Thus, Tuvalu’s 10,000 inhabitants fear they may one day have to flee to higher grounds. The same goes for many poor countries that are already suffering loss and damage from extreme weather with little means to cope – but also for Europe’s far north and the US-state of Alaska.

Places like the US, China and the EU, which produce the lion’s share of greenhouse gases, feared that including loss and damage as a separate issue in a treaty would make them liable for compensating poor nations under the principle of ‘polluter pays’. Instead, they wanted this to be part of mitigation and adaptation measures. These focus on curbing climate change through lower greenhouse-gas emissions and changing how people live and work.

“This means recognising loss and damage as something different,” says Saleemul Huq, director of the International Centre for Climate Change and Development at the Independent University in Dhaka and senior fellow at the International Institute for Environment and Development in London. “When there is a lack of adaptation, inevitably there is loss and damage. This opens the door for liability.”

While loss and damage was already outlined at the COP19 in 2013 in the Warsaw International Mechanism for Loss and Damage, in Paris the international community agreed for the first time to address it in a global climate agreement.

Dealing with loss and damage means sharing data and technical expertise, but also financial support. Insurance will likely play a big role. Countries could contribute premiums to an insurance fund that will compensate them for losses in the future. Huq cites a pilot scheme that has already been developed for weather index-based insurance in places like Africa, the Caribbean and Bangladesh. Recognising the threat to Alaska’s Inuit fishing villages, US President Barack Obama has pledged 30 million dollars to a Climate Risk Insurance Initiative, Huq notes.

While COP21 is a milestone for vulnerable countries, the deal leaves much to accomplish. Current climate finance for adaptation (actions to cope with foreseeable threats) and mitigation (cutting greenhouse gases) is not fairly distributed, according to Huq.

“The demand on behalf of vulnerable countries is that at least half of the money goes for adaptation,” says Huq. Right now, however, 84 % of the 6 billion dollars in climate finance already delivered goes to large developing countries for mitigation. Only 16 % is left for vulnerable countries to adapt to climate change. “This is unacceptable,” says Huq.

The Green Climate Fund (GCF), which will administer the 100 billion dollars a year in climate finance that countries have pledged as of 2020, wants to set this right, says Huq.

But aside from governments, much of this money is expected to come from the private sector. Unfortunately, least developed countries may also be the least attractive, Huq warns. Most private sector money goes for mitigation in large developing countries where there is money to be made from exports and investments in green technologies like wind and solar parks. But the least developed countries need financial means for adaptation: to respond to the effects of climate change with new agricultural crops or to resettle people away from coastal areas.

Countries like Germany have promoted mitigation efforts such as switching from fossil fuels to renewable energies for electricity production. But coal-rich, poor countries like Bangladesh often argue that it is cheaper and more practical for them to stick to fossil fuels than to make the investment in renewables.

“The German energy transition also began 30 years ago,” said Thomas Hirsch, a climate and development expert, at an event held by the Friedrich Ebert Foundation in Berlin. He cites a recent study asking developing countries what would motivate them to choose alternative forms of energy. “The answer was perhaps surprising, but when you think about it not very: we need access to technology, we need financing, we need knowledge, and we need to alter the public perception in a way that allows us to approach renewable energy, for example, in an innovative way.”

At the same time, developing countries are quick to note that they haven’t been polluting the globe since the 1850s like industrialised countries – and haven’t reaped the same economic wealth either. They also frequently point to the injustice of being asked to forego cheap fossil fuels while bearing the consequences of global warming they didn’t cause.

The least developed countries still contribute only a small fraction of the world’s carbon emissions. And Germany, for one, still produces a lot of power using coal, even though it has increased the share of renewables to nearly 30 %. Despite the government-mandated phase-out of fossil fuels (Energiewende), the country exports coal technology as well as power produced by coal to other countries.

To discourage fossil fuel usage, experts say there should be a global market price for carbon emissions – so-called CO2 pricing. If industry had to buy the rights to emit greenhouse gases in a global marketplace, this would push the price of CO2 high enough to encourage investment in renewables.

“Ninety percent of all coal capacity is planned in ten countries: China, India, Turkey, Vietnam, Indonesia, South Africa, Korea, Japan, Bangladesh and Taiwan,” says Ottmar Edenhofer, professor at the Potsdam Institute for Climate Impact Research. He argues that even if the cost of renewables falls, this will not stem the tide of fossil-fuelled power. The reasons are heavy subsidies for oil, gas and coal around the globe.

“It is underestimated what an excellent instrument CO2 pricing is for investment in clean water, in clean power, in sanitary installations,” because the innovation it sparks will boost competitiveness, he says. “This will give a clear signal that CO2 pricing and fighting poverty can be intertwined. It is simply not true that fighting poverty is a conflicting goal.”

But the complex discussion of C02 pricing is not relevant to many developing countries. “It doesn’t offer any answer – not a quick or convincing one – to the question of how to quickly overcome energy poverty. Energy questions are in most developing countries above all a question of access to energy – cheap and clean,” argues Hirsch. “If I were sitting in Bangladesh or Fiji, people would walk out of this discussion, because these are not the urgent questions.”

Huq points out that emerging countries like Bangladesh and China are already embracing renewables technologies and “everybody agrees that it would be better if coal stayed in the ground.”

Looking ahead to the signing of the Paris accords in April, UN Secretary-General Ban Ki-moon said in February that goals are one thing, but “now we must move from aspirations to action.” Simply meeting pledges to cut emissions won’t keep the planet from heating up by less than 2 degrees Celsius as the signatories hope, he warns. They must also boost their ambition over time. Severe storms, droughts, floods and rising sea levels already cause people to lose their homes, property and lives, according to Ban.

“The Paris agreement is a major achievement, which we worked very hard to get, and we are very happy with the result. It puts everybody on the right track, even if there is not sufficient ambition,” built into the deal, says Huq. “But we will work towards achieving these goals.”