A long way to go

Tunisia seems to be the singular success story of the 2011 Arab spring. The country is now considered the Arab world’s only real democracy, but it is still facing a lot of problems. 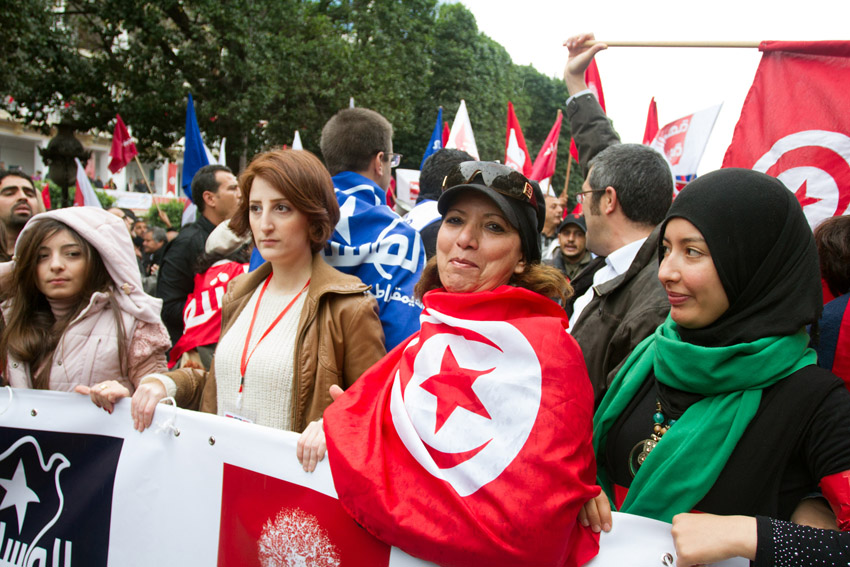 Many young people who participated in the demonstrations, did so full of hope for a brighter future, reforms and an end to political oppression. But now “there is tremendous frustration about the results of the Arab spring, which was supposed to bring about social justice and development,” says Nabila Hamza, a Tunisian women’s-rights activist and former head of the Foundation for the Future, a civil-society organisation.

Hamza speaks of growing “doubt and hopelessness” in regard to the terror militia ISIS in other Arab countries and fear of terrorism in Tunisia. Her country must cope with an influx of refugees, moreover. With a population of 11 million, Tunisia has taken in one million refugees from Libya, Hamza says.

According to the gender-rights activist, people worry about whether Tunisia’s comparatively strong social fabric, which is considered a key factor for the success of its democracy movement, will bear the strains. Unlike other countries in the region, Tunisia is not plagued by sectarian strife, and it has a large, modern and relatively well-educated middle class. Before the new constitution was passed, the National Dialogue was able to broker a broad consensus, resolving a political crisis between a government led by the Tunisian version of the Muslim Brotherhood and their secular opposition.

Tunisia’s citizens worry about the impact of other destabilising forces however. Many fear that the governments of Saudi Arabia, Qatar, Iran and Turkey are stoking religious discord in the entire region of the Middle East and North Africa (MENA), according to Hamza. She spoke at an event in Berlin in December that was sponsored by the German Development Institute (DIE).

Hamza makes a plea to western nations to lend more support to MENA countries that have embarked on the path to democracy. Tunisia desperately needs investments and structural reforms to transform the economy. GDP growth in 2014 was 2.8 %, lower than the new government’s original forecast of 4 %. Nonetheless, that was better than the slump that followed the 2011 revolution. However, Tunisia largely depends on trading partners, especially Europe, which is experiencing its own economic difficulties.

“There is hardly any help for a country like Tunisia, although much has been achieved on the way to democracy, despite the problems in the region and the difficult economic situation,” Hamza points out.

Hamza praises Germany for its strong commitment to the country, saying that it has been a vital partner for Tunisia. Nonetheless, according to her, the people must get an economic dividend. That could avert unrest should people become frustrated with the slow pace and quality of change.

Gabriele Groneberg, a Social-Democrat member of the Bundestag and MENA expert, says people fear that economic insecurity may open the door for terrorist activities: “We have to support the Tunisians with measures that begin with training and education and with business contacts so that private-sector companies can cooperate.” She also wants Germany to support the health sector and civil-society development.

Some believe lessons should be learned from the “velvet” and “colour” revolutions in Eastern Europe. Silvia von Steinsdorff of Berlin’s Humboldt University lists several key factors that marked countries where the transition to democracy succeeded in that region in the early 1990s. Relevant aspects include a homogenous society, a strong consensus or at least a willingness to compromise among elites.

In her eyes, another important incentive for democratic change was the prospect of joining the European Union (EU) after the Soviet Union had collapsed. That aspiration was shared by many East Europeans, who felt strongly about it. EU membership only became possible once certain criteria of successful transformation – free elections and market-based economic policies, for instance – were met.

It matters, however, that the Eastern European democracy movements took place before 9/11 in a completely different geopolitical context. Steinsdorff points out that religion played virtually no role in post-Communist countries.

Tunisian activist Hamza argues that support – whether symbolic or financial – from the EU and its members was crucial to East European success. Democracy movements in the MENA region do not get that kind of incentives and backing, she regrets. “There was always very generous support from Europe, from NATO and from the United States” for Eastern Europe, she says, but “the international situation has been very unpropitious for the Arab world.”

According to Hamza, many people in the region are now questioning the commitment of western powers to their cause. She says some even believe that the uprisings were the product of western conspiracies, and that ISIS too is a result of such conspiracies. “There are many people who believe the west has economic interests, but no interest in the democratic transition,” Hamza says.

Conspiracy theories, moreover, thrive in a region that has suffered authoritarian rule for centuries. Scholars who study predominantly Muslim countries know that grievances from the colonial era still shape people’s world view, and that Egypt’s Muslim Brotherhood, for instance, initially read the holy scriptures with an anti-imperialist mindset. Europeans, in contrast, mostly feel that their nations former empires do not concern them. What people in the MENA region and Europe know about their common history, diverges considerably. Many Europeans are not aware of western rhetoric of human rights and democracy sounding hollow to many Arabs.

In Hamza’s view, the Arab-spring movements were right, despite all that has happened. She appreciates the “rays of hope.” She says the street temporarily won, and civil society broke through “the wall of silence”. She sums up: “It was right to revolt, but we still have a long and thorny way ahead of us.”

Insights into a war-torn country