The number of arranged marriages in the Middle East and North Africa is decreasing. Matrimony between cousins is still widespread, but matches of this kind now account for at most a quarter of all weddings. A growing number of young people find their partners without mediation; marriage for love is their ideal. It is still normal, however, for parents and grandparents to have a say in the choice of a spouse. 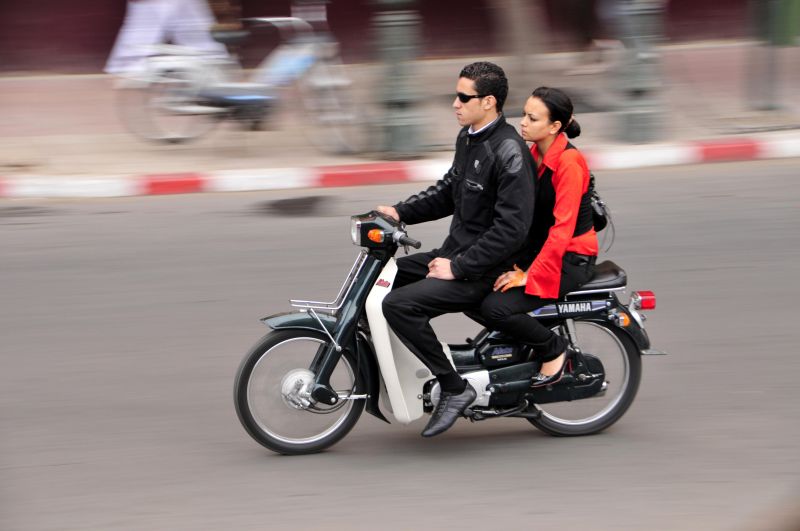 She has a good university degree, works as well-paid manager, owns her car: Kenza (all names have been changed) is a 32-year-old Moroccan and proud of her career and financial independence. Although she could have bought her own apartment long ago, she still lives with her parents. “I get on brilliantly with my mom and dad,” she explains. “I see no reason to move out until I marry.”

Kenza has recently become engaged. She and her fiancé met at a seminar and became closer chatting on Facebook. “We talked a lot, and then we clicked – outside Facebook,” the young woman says with a smile.

Kenza has fulfilled her dream of a romantic love match but conventions still matter. Her husband is Muslim, of course. She could not marry a non-Muslim under Moroccan law; there is no system of civil marriage. To get engaged, Kenza needed her parents’ consent. The families observed the traditional introduction rituals: there were reciprocal visits by mothers and aunts and discreet checks on the prospective in-laws’ reputation. Whatever Kenza’s parents thought of their daughter marrying for love, they did want to make sure the candidate had the right educational background, financial prospects and good manners.

The approval of her parents, especially her father, means a lot to Kenza. Thanks to a reform of family law in 2004, Moroccan women are allowed to marry without the written consent of their fathers or other male guardians. “I approve of this law because, after all, I’m a grown woman and can stand up for myself. But I could not imagine marrying someone my parents objected to,” Kenza says.

Mix of modernity and tradition

Kenza’s attitude is a refreshing mix of modern and traditional views and values. It contrasts with many stereotyped perceptions in the West (El Feky 2013). The role of women and the way gender relations are organised have been moulding the West’s and the Arab region’s perceptions of each other since the 19th century. Arabs developed a sense of moral superiority from what they saw as the depravity of western women, whose desire for emancipation undermines family values. Europeans, in turn, feel superior too. They are prone to declare the entire Arab region to be backward and obsess about wearing veils and the suppression of Muslim women.

Both perceptions are socially constructed, and they have been shaping collective perceptions for a long time. The western view of societies in the Middle East and North Africa (MENA) is currently being marked by media reports on sexual violence against women perpetrated by the terrorist militia ISIS and by forced marriages (see box).

According to UNICEF, the number of married women under 18 has indeed gone up among the Syrian refugees in Jordan. The share is now 30 %, while it was only 13 % in Syria before the war. This trend is a result of strife and displacement. Families believe their daughters are safer with husbands. Traditional social networks and control mechanisms do not work in refugee camps, and the situation of people on the run is mostly precarious. To protect the honour of a daughter and the family, girls are married fast once they reach puberty.

It deserves emphasis that teenage marriage rates among Syrian refugees are not typical of Arab countries, even though western media focus on these figures. Stereotyped views, moreover, are reinforced by spectacular cases such as that of Amina Filali, a 16-year-old Moroccan rape victim who committed suicide after a court decided she should marry the man who raped her. Individual cases like this fuel the prejudice that child marriage is the norm in the Arab region and all Arab men treat their wives as prisoners or slaves. That perception is extremely exaggerated.

It is true, however, that a patriarchal mentality and discriminatory legislation limit the freedom and options of women and girls in nearly every Arab country – with the exception of Tunisia. Strictly conservative Muslim scholars contend that women and men become adults when they reach sexual maturity in the physical sense (menstruation or ejaculation) and thus also have the mental maturity for marriage. This pronouncement provides the theological and ideological justification for girls as young as nine to be married in Sudan, Saudi Arabia and Yemen, three especially conservative countries.

In other countries, such as Morocco, Tunisia and Jordan, for example, the minimum age for marriage has been raised in line with international conventions. However, courts grant exceptions, so sometimes girls as young as 14 or 15 do get married, especially in rural or poor areas and strife-torn areas. According to a study by the Population Reference Bureau published in 2013, one in seven girls across the Arab world is married before she reaches the age of 18. In Morocco, the same study finds that 13% of all married women are minors, while in Jordan the figure is eight percent.

In most Arab countries, women still do not have the right to sign their own marriage contract; they need the consent of their father or male guardian (wali, mahram). Exceptions include Tunisia, Morocco and Algeria.

Another coercive phenomenon is cousin marriage, with families deciding that first cousins will marry one other. This is quite common in a number of Arabian Gulf states as well as in Lebanon, Jordan, Palestine and Morocco and affects women and men alike. Generally speaking, however, the tradition of cousin marriage is in decline. Today, it is largely confined to rural areas and conflict areas. In Morocco, around 15 % of all marriages are cousin marriages; in Jordan the figure is thought to be around 20 %.

Legal, social and cultural constraints thus continue to mark marriages in Arab societies. At the same time, however, there are signs that the social norms, mind-sets and marital practices are undergoing radical change in the MENA region. The reasons include migration from rural to urban areas, rapid urbanisation, better access to education for girls and changing attitudes to marriage and family life.

Because of economic crises and change, moreover, many young men can no longer fulfil their traditional role as provider for the family. At the same time, many educated young women are no longer willing to bow to the dictates of a traditional role and large family. Instead, they want a romantic marriage and a small family with two to three children, following the western model. The average age at which women marry has risen to 27 in Morocco and 25 in Jordan – and it is set to rise further.

Widad is a 30-year-old engineer from Jordan and has recently found her dream partner. Unlike Kenza in Morocco, she never considered it an option, even theoretically, to stay single. The reason is that, in Jordan, a woman who does not get married remains a child all of her life: “al-bint” (Arabic: the daughter). She only becomes a member of the adult world when she marries.

Widad was still at school when the first marriage candidate turned up on her parents’ doorstep. “My father’s family belongs to a distinguished tribe,” she explains in fluent English. “In Jordan, the groom’s – or suitor’s – family sends a mediator to make the proposal to the bride’s mother.” If the bride’s family considers the candidate suitable, reciprocal visits are arranged for the families to get to know one another better. They take the form of a set ritual. Then, if everyone is happy about the match, the male heads of the two families make contract.

“In a democratic family like mine, the daughter is asked in advance,” Widad adds. “I made it clear that I wanted to finish my studies before I got married. When Rami asked for my hand, I knew straight away that he was the one” But that did not mean that she gave up control: “I had it written into the marriage contract that I would be able to carry on working after getting married and having children. It also stated that we would live in our own apartment and not in the same house as my parents-in-law.”

Her future husband accepted these conditions. Widad does not reject arranged marriages out of hand. She does not believe that marrying for love always makes for a happy family. “I have friends who were married as cousins and are happy with their life. The important thing is that no one should be forced.”

Martina Sabra is a freelance journalist and development consultant.
martina.sabra@t-online.de