While many rich nations raise money by putting a levy on fuel consumption, many developing countries pay subsidies to make fuel more affordable. These subsidies are essentially negative taxes. They are unsustainable in both environmental and budgetary terms. Asia’s public finances would be strengthened if the subsidies were phased out.

contributed to D+C/E+Z in winter 2017/2018 as principal economist at ADB’s Economic Research and Regional Cooperation Department. 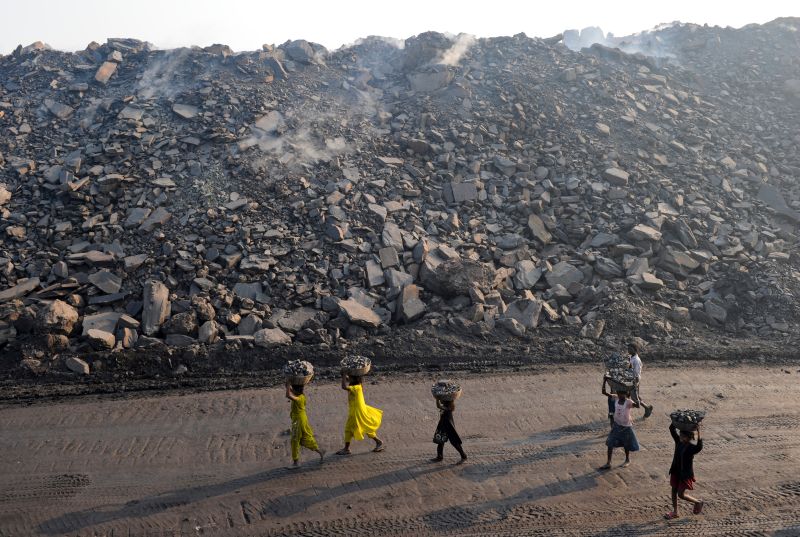 Böthling/Photography Coal has become increasingly important in India – people near strip mine in Jharkand.

Some 150 to 200 years ago, oil, coal and natural gas changed everything – by powering machines, lighting homes, propelling engines and reducing distances. Back then, the inventor Thomas Alva Edison said: “I’d put my money on the sun and solar energy. What a source of power! I hope we don’t have to wait till oil and coal run out before we tackle that.”

Today, sustained growth, which has catapulted many developing Asian economies to middle-income status, is indeed depleting resources such as coal, oil and gas. These resources formed as plant and animal matter fossilised over millions of years under great pressure underground. Spurred by massive government subsidies, fossil fuels are today a major source of energy, providing a lifeline to billions of Asians. But the burning of these fuels is spewing greenhouse gases into the atmosphere at an alarming rate, increasing global temperatures and heralding a dangerous era of climate change (see box).

Apart from the environmental risk, there is another reason why reforms of the subsidy regimes are gaining momentum internationally. Public budgets are tight and the costs of giving people access to oil, gas and coal at reduced prices are considerable. According to an assessment by the Asian Development Bank (ADB), removing these costly subsidies is the first step towards sustainability in both environmental and budgetary terms (see ADB, 2016).

Developing Asia stands at a juncture where it can contribute the most to, and gain the most from, meeting the goals of the Paris Agreement on climate change. Today, the region contributes 40 % to humankind’s global carbon emissions. In the 1990s, the Asian share was just 15 %. It is rising due to a growing reliance on fossil fuels, which are the dominant source of electricity generation and industrial expansion.

In 1990, 70 % of developing Asia’s primary energy came from fossil fuels. By 2014, this proportion had grown to 85 %. The reasons for this trend are that the share of traditional biofuels is declining, and the contribution of renewable power is still rather small. Coal has taken up a central place in the energy mix.

Some countries, mainly in South and Southeast Asia, are still investing in sub-critical coal plants. “Subcritical” means that they are not as efficient as they could be because they do not use the most advanced technology. Switching to high-tech ultrasuper-critical new coal technology is expensive, however. Doing so would require special alloys, precise manufacturing and skilled professionals.

At the same time, low-priced petroleum products account for over half of the fossil fuel subsidies in many countries. Although the share of oil consumption is expected to decline, oil will likely remain the preferred liquid fuel needed in sectors like aviation and shipping, which are not easy to decarbonise.

When the world market price for crude oil shot past $ 100 per barrel a decade ago, Asia accounted for as much as a third of global fossil fuel subsidies, mostly for consumption of petroleum products. About five years ago, developing Asian economies spent about 2.5 % of GDP on average on subsidising oil, gas and coal. The official objective was to encourage production and provide cheap energy to the poor.

In 2013, oil prices dropped sharply. Some Asian governments took advantage of this new trend to cut fuel subsidies. However, many other governments still find reforms to be very difficult. Fuel prices are politically important, as many people feel entitled to low prices. Whether the subsidy reductions can be maintained if world market prices for oil rise is untested.

Subsidies are a huge burden on public finances. Moreover, against their official objectives, artificially low fuel prices mostly benefit the better-off since they consume more energy than the poor. Indeed, the most marginalised rural communities still depend on firewood and other biofuels. Fuel subsidies bypass them.

The price differential between subsidised and unsubsidised fuels fosters overconsumption, diversion and smuggling. Another downside is urban air pollution which affects millions of people – not only in megacities such as New Delhi or Beijing, but in smaller towns such as Gwalior in India, Peshawar in Pakistan or Xingtai in the People’s Republic of China. Making the problems even worse, under-priced fossil fuels pose a barrier to investing in renewable power generation, so they ironically curtail energy supply in general.

Removing subsidies on fossil fuels will allow the development of an energy mix that reflects the true costs of each type of energy. It will also release fiscal resources that could be put to better uses, such as social protection, expanding access to affordable energy services or promoting investment in renewable energy.

Unless governments act decisively to mitigate climate change, fossil fuel consumption will continue to increase. Asia would become even more fossil-fuel dependent. It is true that renewable energy is receiving record amounts of investment, but technologies for wind and solar power generation are still comparatively expensive. If developing Asia continues a carbon-intensive development trajectory, the Paris Agreement’s ambitions will not be achieved even if the rest of the world were to eliminate all their emissions.

To reform subsidies, however, governments must deal with several issues. Items on the agenda include:

Reforms make sense – and they are feasible, as an ADB study shows (ADB, 2016b). It uses data for India, Indonesia and Thailand to understand how reducing subsidies will impact different parts of the economy. It shows that over time, the new reality of higher-priced fossil fuels will spur users to change behaviour and switch to cheaper forms of energy, which will in turn encourage investment in renewable energy and drive down its cost. At first, the impacts of more expensive fossil fuels may be painful, but over time economies will be on a path of cleaner energy and more sustainable public finances.

The rationale for fuel subsidies reform is to reduce national emissions and at the same time discourage energy overuse, reduce the need for energy rationing, improve economic efficiency and lessen fiscal vulnerability.

In Hamburg this summer, world leaders from the G20 group (with the exception of the USA) reconfirmed the irreversibility of the Paris Agreement. Global warming hurts everyone, so joint action is necessary. It will benefit everyone, including our children and grandchildren.
It is time to reap the benefits of the Paris Agreement by shifting resources from fossil fuels to sustainable energy. It is time to make Edison’s wishes come true.

Pay particular attention to the poor