Germany’s Federal Ministry for Economic Cooperation and Development (BMZ) has published reform plans with the motto “BMZ 2030”. The number of partners for bilateral governmental cooperation will be reduced. 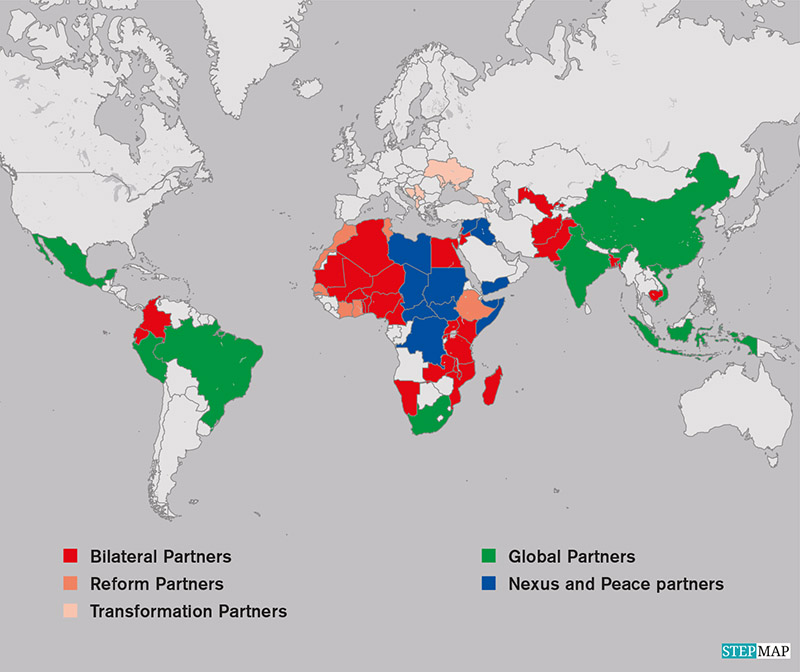 The strategy paper points out that several global crises are escalating. Climate change, violent conflict and fragile statehood are mentioned explicitly, and so is hunger, which has recently begun to spread again. As the world population further increases, moreover, ecological habitats are shrinking. The authors warn that our species would need two Earths if all nations lived the way the high-income countries do, but we only have one. Given that it is UN consensus to achieve the 17 Sustainable Development Goals (SDGs) within this decade, time is said to be short.

Development policy, the BMZ argues, is a cross-cutting issue that concerns the entire federal government. The reform proposals are meant to make the use of official development assistance (ODA) even more strategic, effective and efficient. One way to achieve this is to focus on a smaller number of Germany’s partner countries for bilateral governmental cooperation. It will sink from currently 85 to 60 in the future.

Germany’s bilateral governmental cooperation is implemented by federal institutions including the GIZ, KfW, PTB (the national metrology institute) and BGR (which specialises in geosciences and resources). Other forms of cooperation – for example with churches or civil-society agencies engaging non-governmental organisations abroad – are not affected by the reduction. Funding for multilateral programmes (EU, UN, international finance institutions, et cetera) will also continue as before. Finally, the BMZ wants to intensify support for private-sector investments in developing countries and emerging markets. Such support is not bilateral cooperation.

The top priority of German ODA remains to overcome hunger and poverty. The strategy paper lists the following core topics:

Moreover, spending on public-health programmes is to increase.

Henceforth, the BMZ expects bilateral partners to make even faster progress in regard to governance, human rights and fighting corruption. Countries with particularly strong developmental ambitions – for example Ethiopia, Ghana or Tunisia – are to get particularly strong support. They are called “Reform Partners” in the strategy paper. On the other hand, progress in some countries, including Costa Rica or Mongolia, is considered to have been so good in recent years that further governmental funding from Germany is no longer appropriate.

Where governance disappoints – think of Myanmar or Burundi for instance – bilateral German agencies will no longer be active in the future. They will also withdraw from partner countries where Germany’s role has been only marginal compared with that of other donor countries. Haiti in Sierra Leone are indicated as examples.

For bilateral cooperation, the BMZ has defined three categories of partners: “Bilateral Partners“, “Global Partners” and “Nexus and Peace Partners”. To a large extent, conventional ODA will characterise cooperation with bilateral partners. The above-mentioned Reform Partners are a subcategory of Bilateral Partners, and so are Transformation Partners in the former East Bloc. Global Partners, by contrast, are emerging markets like Brazil China or India, and cooperation with them will be geared to tackling global challenges such as climate change. Cooperation with Nexus and Peace Partners, in turn, will focus on regions marked by strife and the flight of refugees. The goal is to reduce violence and stabilise societies.