Mental health can be strengthened

Long violent conflicts and wars can cause traumas not only in individuals but also in societies. In people, it often gives rise to chronic conditions such as post-traumatic stress disorder (PTSD). In societies, it creates a breeding ground for further division and violence. Psychologist Vilma Duque has supported traumatised people in Guatemala and other Latin American countries for many years. She shared insights in an interview with D+C/E+Z.

contributed to D+C/E+Z in summer of 2022. She is a psychologist specialising in social psychology and supervision with a primary focus on trauma support and dealing with the past in post-war societies. Her work in Guatemala and Mexico was financed by the German NGO Bread for the World for many years. She is co-editor of the book “Supervision in Mesoamerika” or “Cómo montar un caballo muerto – Retos de la Supervisión Psicosocial en Mesoamérica (available in German: Psychosozial-Verlag, 2020 and Spanish, 2018). 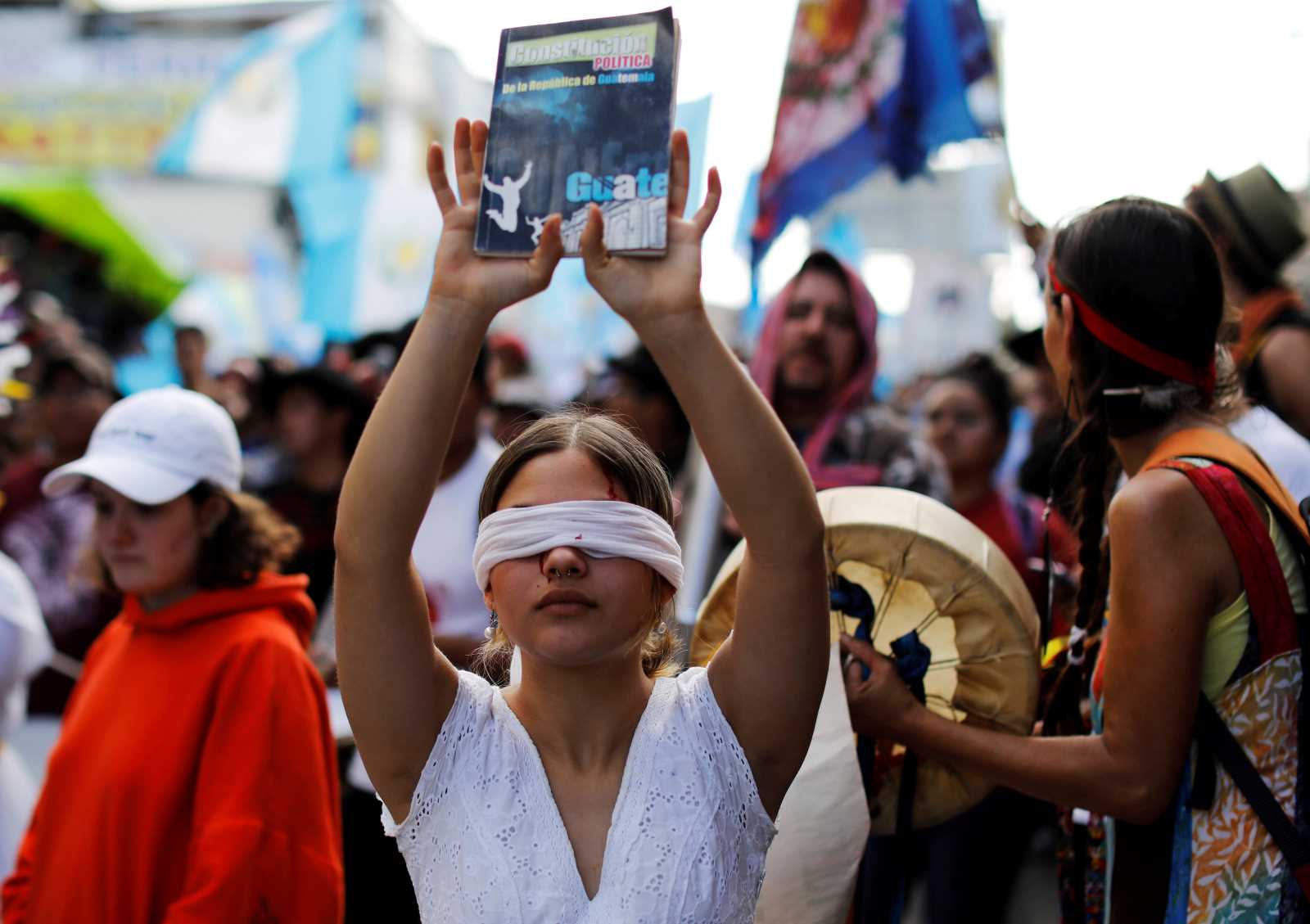 picture-alliance/REUTERS/Luis Echeverria In 2019, protestors wanted the UN Commission against Impunity in Guatemala (CICIG) to keep working.

In Guatemala, a peace agreement in 1996 ended a long and bloody civil war that had deeply traumatised the people. In the early 1980s, the military had systematically destroyed villages and massacred communities, especially in the north of the country. Hundreds of thousands of people were murdered, displaced or disappeared. Indigenous communities were targeted in particular, so the atrocities were classified as acts of genocide. How has this history been dealt with so far?
There were two truth commissions, which were very important in documenting atrocities and analysing the causes of the war. However, very little was done to actually heal wounds. Many of the perpetrators are still in office unchallenged. The state was supposed to implement a process for coming to terms with the past, but it has failed to fulfil that responsibility. Peace has done little to change the structural violence in the country. The causes of the war remain unresolved. Apart from the extreme inequality of income, land ownership and access to education and health, they also include despotism and corruption. The country’s small elite is primarily interested in retaining its privileges. It has no desire to rake through the past and upset the status quo. At present, the country is actually moving backwards.

What are the consequences of not coming to terms with past events and traumas?
First of all, let me point out that what has been done in this regard in Guatemala was mainly done by civil-society organisations and people who were directly affected. The non-governmental organisation ECAP, for example, was established in 1996 to help implement a process for coming to terms with the past, dealing with collective as well as personal traumas and tackling the consequences of violence. I worked with that NGO for years. ECAP and other NGOs are highlighting a continuity of violence that is evident in new forms all the time. Wars do not occur in a vacuum, as we know from many other countries. Traumatisation creates a breeding ground for the social reproduction of violence. Fear spreads, paralyses and engenders more fear. The impacts include distrust, disorders in regard to forming personal relationships and apathy. Where social and political life is shaped that way, change is almost impossible.

How does that manifest itself in Guatemala?
Violence and abuse are common. There is drug trafficking, human trafficking, gang crime, femicide and racketeering, especially in urban areas. People generally live in poverty, and a high percentage of children is malnourished. The state is becoming increasingly absent from daily life. Indigenous rural communities are most affected by economic and social marginalisation. A lot would have to happen for the situation to improve. First of all, the state lacks funding, but only a minority pays direct taxes. Public agencies are underfunded and often fall prey to corruption. People feel abused and abandoned. To escape the violence, poverty and hopelessness, hundreds of thousands have left the country for the USA.

From your perspective, what needs to be done?
Action needs to be taken at many levels, and foundations for such action need to be laid. A process for dealing with the past must start, with the goal of providing reparations to victims. It is absolutely vital to investigate the atrocities and create a historical record of the upheavals that society was – and still is – experiencing. Latin America has many truth commissions. In Guatemala, we even had two, and one was headed by Christian Tomuschat, a German law professor. But these commissions obviously did nothing to improve the economic situation, and there was no political change either. That is why there is a so much frustration and hopelessness.

What form should the process of coming to terms with the past take in tangible terms?
The past cannot be separated from the present. In my view, any fundamental attempt to deal with the past naturally starts with education. Remembrance work in schools is fundamental, as we know from Germany and the way it dealt with the Nazi past and World War II. Remembrance is essential because the past keeps catching up with us. I think Germany tackled this issue better than many other countries because it managed to keep the topic alive in society as a warning for what might happen in the future. It is also important to highlight connections between remembrance and daily life, to show people how much their lives are affected by the past.

You have described what collective trauma does to a society. How does trauma affect individuals?
Unresolved trauma can have all sorts of impacts. It often causes a state of permanent stress, which means that the body is kept on constant alert. Sufferers are no longer able to function normally and may develop a whole range of symptoms, including anxiety, insomnia or nightmares. The same phenomena have been observed in victims of political persecution. I work with such people and many of them have developed chronic complaints such as stomach problems, chronic tension, rhythmic disorders, neuropathic pain and even diabetes. In children, unresolved trauma can lead to learning difficulties, problems of staying focused and hyperactivity. And, as we know today, there is a risk of permanent organ and even brain damage.

Is there a cure for these ailments?
Well, it involves a long and complex process that goes beyond psychosocial support. A cure can take several years. It is evident, however, that people become calmer and more reflective if they feel heard in protected spaces. In very many cases, they will then manage to rebuild relationships, create social networks, live less stressfully with less fear and restart pursuing goals in life. In the course of this, they become aware of the resources that are at their disposal for processing their traumatic experiences. Otherwise, new traumatic experiences in the divided society around them will cause retraumatisation. We often work in groups. It is important to show them that there are others they can trust. It is also very important to talk about what goes on within a group, including conflicts and minor upsets. We call this approach psychosocial supervision. In Guatemala, it is revolutionary.

In what sense?
People normally do not talk about conflicts in a country like Guatemala. Doing so is considered to be problematic or dangerous. But when conflicts are not talked about, they remain unresolved and spawn new forms of violence. Shying away from the issues has an incredibly detrimental effect, and so does inability to handle emotions. Relevant skills need to be learned. In group discussions, we therefore tackle matters such as recognising, expressing and dealing with feelings such as anger, hatred or the craving for revenge. Let us not forget that coming to terms with conflicts appropriately is essential for paving the way for change.

How do you reach those affected?
ECAP works with representatives of civil-­society organisations in Guatemala. We support activists, human-rights defenders, judges and prosecutors – many of them women – as well as people who were involved with CICIG, the UN Commission against Impunity in Guatemala. Its mission was to investigate major contemporary cases of corruption perpetrated by state officials and institutions. This is basically state-aided organised crime, and its structures can be traced back to the war. The CICIG was very successful. When it targeted not only the military, however, but also considered the systematic tax evasion of the economic elites, 13 years of successful work came to an end. In 2019, the government expelled the CICIG from the country in an affront to various donor governments and the UN itself. Numerous lawyers and even public prosecutors were openly threatened. Many have gone into exile in the two years since the termination of the commission, because they were politically persecuted. We are taking care of persons concerned. Moreover, we support journalists in the country and help them stay able to work in the present conditions.

Finally, on a very different topic, but sadly a current one: How can the people be helped in Ukraine?
First of all, it is important to start psychological support now, in the turmoil of war. Aid services must be organised. They can often prevent initial traumatic experiences from becoming long-term traumas. People must get the opportunity to talk about what they have experienced, so they can find ways to come to terms with it. This needs to happen in Ukraine – but also in Germany, where large numbers of Ukrainians have sought refuge with their children. We know today how important it is to talk about what we have experienced in order to lay foundations for mental health. An important prerequisite is to provide safe spaces, as I said earlier.

Can war also have psychological implications for us “bystanders”?
For those who support traumatised people without receiving support themselves, victims’ accounts of their experiences can cause what we call “secondary traumatisation”. But things are complicated. People who are confronted with the atrocities of war on a daily basis, but fail to maintain personal distance, may also be affected. We know that images can be quite powerful. We live in times of vulnerability. We just experienced the impacts of the Covid-19 pandemic and related restrictions. Consider the unprecedented social isolation, for example. It is at the root of additional traumas. Images of war will do more damage if someone has no social ties, no social environment to compensate.

Vilma Duque is a psychologist specialising in social psychology and supervision with a primary focus on trauma support and dealing with the past in post-war societies. Her work in Guatemala and Mexico was financed by the German NGO Bread for the World for many years. She is co-editor of the book “Supervision in Mesoamerika” or “Cómo montar un caballo muerto – Retos de la Supervisión Psicosocial en Mesoamérica. (available in German: Psychosozial-Verlag, 2020 and Spanish, 2018).
duquevilma@yahoo.de