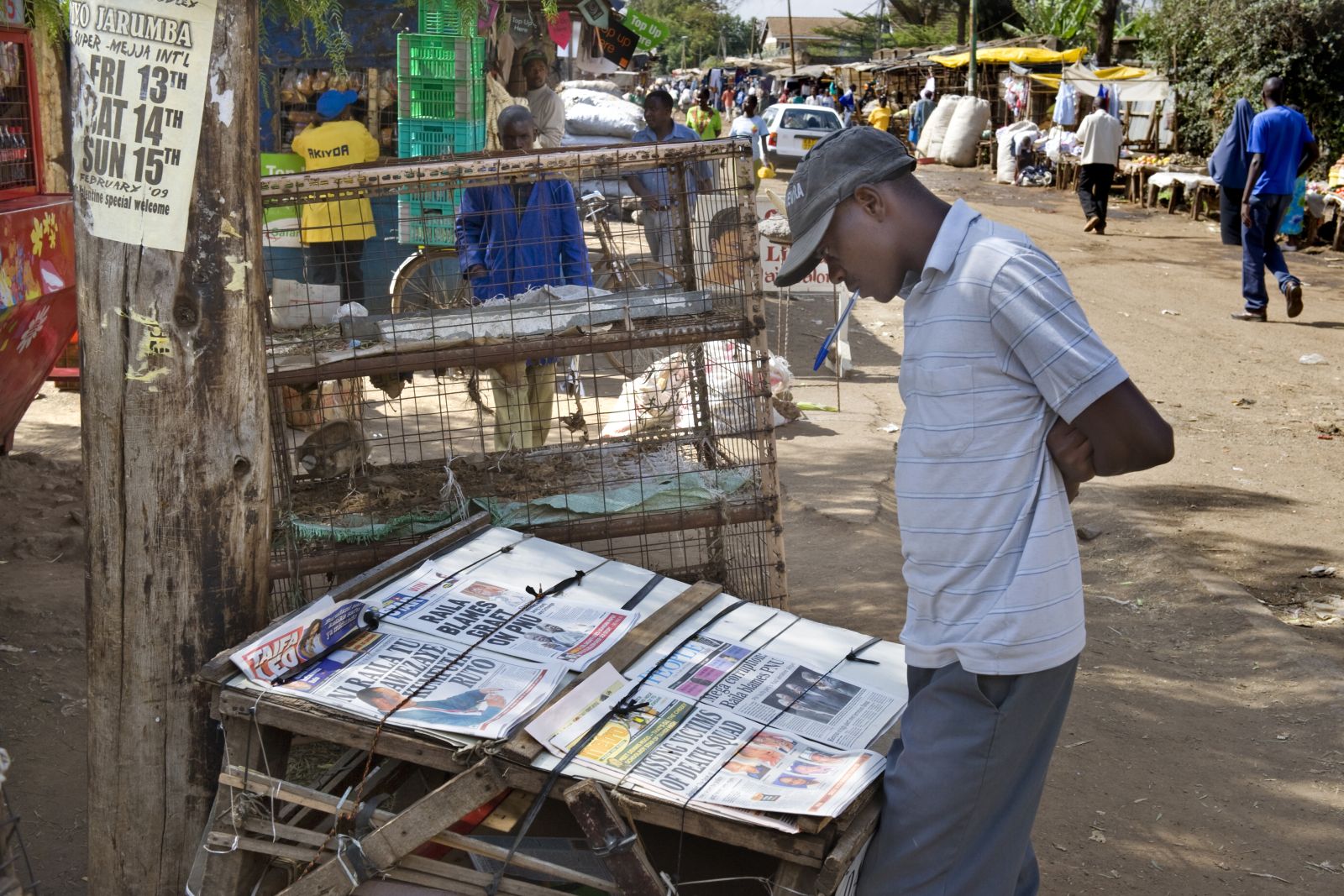 Schytte/Lineair Literacy rates have risen, and more countries now enjoy the freedom of the speech than in the 1980s: newspaper stand in Nairobi.

The case Pinker makes is overwhelming. Here is an abridged version of beginning of chapter 20. Its title is “the future of progress”, and it starts with a summary of what has been achieved in the course of the past 250 years:

This is only a part of Pinker’s summary of the blessings of progress. The book’s documentation of facts and trends is solid. The data clearly show that humanity has advanced incredibly. If humankind sticks to the well-tested formula of reason, science and humanism, Pinker sees scope for further progress.

The book’s final chapters discuss what that means. Pinker admits that human beings are not by nature reasonable. Indeed, irrational behaviour is actually quite common. The point, according to the psychology professor, is that we are endowed with reason, and that we benefit from using this capacity.

Science, of course, is based on reason, and Pinker praises its merits. Research actually keeps delivering results in terms of new technology. At the same time, it expands the horizons of our knowledge. The Harvard scholar refutes post-modern, romanticist and other intellectual notions that belittle science. He insists that science is not just another ideology. It delivers key to understanding and changing the world.

That said, Pinker argues that the powers that science unleashes should be harnessed in a spirit of humanism, which bases morality on a secular foundation. The principle idea is the acceptance that all human beings are of equal value and should have equal rights. Pinker explains: “If I object to being raped, maimed, starved or killed, I cannot very well rape, maim, starve or kill others.” This kind of impartiality is the foundation of Pinker’s moral reasoning.

This thinking is secular because it does not refer to any higher being. Its logic is imminent in human existence. Pinker writes that people do not necessarily need religion, but his stance is not anti-religious. Impartiality is actually reflected in the biblical rule of treating others as one would want them to treat oneself. Other world religions have similar doctrines.

The point of enlightened humanism, however, is that collectively binding decisions should not be based on any kind of religious dogma. Nor should they be based on special interests or personal will. According to Pinker, policies should be based on the careful assessment of all relevant facts and well-considered hypotheses about causes and impacts. All interests affected should be taken into account.

So is everything fine given that humanity has made such spectacular progress? No, Pinker does see two huge risks. One is climate change and the other is nuclear war. If nothing is done to control these risks, Pinker considers catastrophes not only to be possible, but even likely. In his eyes, however, the situation is not desperate because multilateral action has been taken on both fronts.

The big question, of course, is whether those multilateral efforts will be effective. Action on climate change must be stepped up fast, whereas non-proliferation and disarmament agreements seem to be eroding. As the Harvard professor acknowledges, things can go terribly wrong.

Unenlightened and authoritarian populism is a serious problem in this context, according to Pinker. Unsurprisingly, US President Donald Trump serves him as the most prominent example of a leader who shies away from fact-based discourse, but pretends to know more than experts. As political scientist Jan-Werner Müller argues (see D+C/E+Z e-paper 2017/02, p. 39), populist leaders:

Pinker writes that the way western nations practice democracy is part of the problem. Elections resemble sports events, with citizens rooting for one team and resenting the other. Campaign slogans and polemical agitation prevail where nuanced arguments and diligent number crunching are needed. Media pundits would do a better job if they carefully weighed arguments instead of reinforcing their audience’s entrenched world view. Nonetheless, Pinker expresses the belief that the forces of enlightened liberalism will prevail – not least because populists’ rejection of experts means they are likely to run into problems they refuse to see.

Pinker’s basic stance on reason, science, humanism and progress makes sense and deserves endorsement. Details of his long essay, however, certainly deserve scrutiny. For example, Pinker tells us not to worry about rising inequality as long as living standards in general keep rising. He has a point, but he only briefly discusses the worrisome trend of the super-rich increasingly being able to usurp democratic decision-making (see our briefing on philanthropy).

Another example is that Pinker considers nuclear power to be a rational choice in view of climate change, arguing that there have only been few accidents in the past and they all proved to be far less deadly than environmentalists had feared. He does not, however, discuss the unresolved issue of radioactive waste. It certainly looks irresponsible to generate tons of toxic waste which need to be stored safely for thousands of years. The proliferation of nuclear power plants, moreover, would make the proliferation of nuclear weapons more likely.

The case in favour of science is not as clear as Pinker would have it. Two fundamental principles of science are transparency and disinterestedness. All too often, regulating agencies base decisions on corporate research that does not meet these criteria.

All these points deserve reasoned and fact-based debate. The views of all parties concerned must be considered. And that can be done according to the principles Pinker spells out in his book. His core thesis is that the promises of enlightenment have not proven to be empty. Modernisation, industrial technologies and, indeed, globalisation have delivered better results than is often assumed. More than 200 years after enlightenment began, it is safe to say that reasoned democracy is more promising than authoritarian populism or any other kind of dogmatism for regulating worldly affairs.

Hans Dembowski is editor in chief of D+C/E+Z.
euz.editor@fazit-communication.de