Physical exercise helps to liberate the soul, so it does more than improve physical fitness. In the Democratic Republic of the Congo (DRC), a faith-based organisation is running a sports and exercise programme to help traumatised women and girls to regain self-confidence as well as control of their body.

contributed to D+C/E+Z in spring 2016 as a sports and movement therapist specialising in psychological issues. Since July 2013, she has been working with the Young Women’s Christian Association of the DR Congo (YWCA-DRC) as a Civil Peace Service expert deployed by Bread for the World – Protestant Development Service, non-governmental German agency. 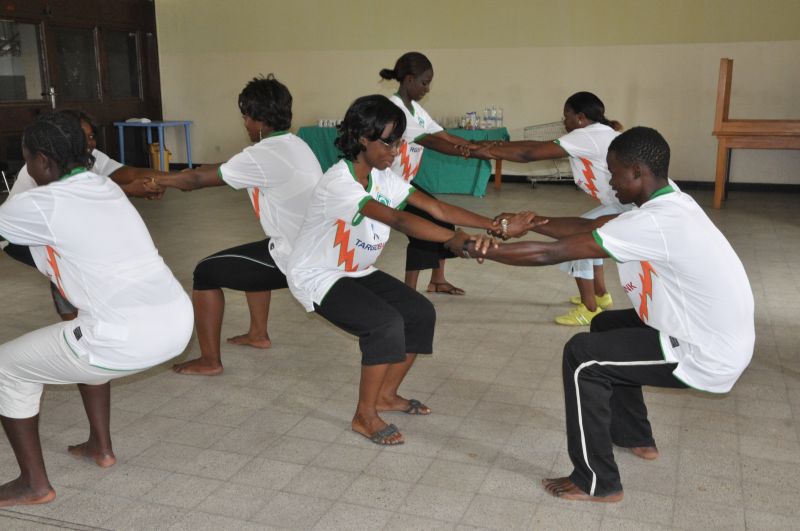 Thirteen women and men stand shoulder to shoulder in a circle. They raise their arms and close their eyes. Each hand must find the hand of someone else in the circle. It takes a while. There is lots of waving, lots of laughing.

Finally, the instructor gives the signal to open eyes. A strange tangle of arms has been created – and it must now be undone without anyone letting go. The group determinedly tackles one part of the knot after another . Closely entwined, the men and women cooperate, discussing approaches, trying ideas, climbing over one another. Every member of the group matters. Solutions can only be found in teamwork.

Without it needing to be said, everyone respects the others’ physical limits. Sometimes an attempt to untangle bodies fails because the openings between arms are too small. In those cases, the group has to start anew.

In the end, it works out: the bodies are untangled. The men and women find themselves holding hands in a big circle. They cheer, jump for joy and start to sing. Then the game starts all over again. It is part of an eight-week course called “Sport and Movement after Trauma”. It is held at the Young Women’s Christian Association of the DR Congo (YWCA-DRC). The YWCA-DRC is a non-governmental organisation with an office in Kinshasa with 17 staff members and small offices run by volunteers in other regions. The association has around 500 members.

“YWCA-DRC focuses on the development of girls, women and communities in the broadest sense,” says general secretary Bibiche Kankolongo. “Sport takes us into a new realm that I believe is important, because wellbeing depends on a whole range of physical factors,” she adds. YWCA-DRC seeks to offer girls, women and men a way to gain control over their body and boost their self-esteem, spirit and soul at the same time. The guiding principle is that “what counts is the personal sense of wellbeing.”

Since 2013, YWCA-DRC has applied this maxim as a partner organisation of Bread for the World – Protestant Development Service in a project supported by Germany’s Civil Peace Service (CPS) in the DR Congo. A German expert is seconded to the project.

In the crisis-haunted DR Congo – a country nearly seven times the size of Germany – violence is a daily experience. In the Great Lakes region in the country’s east, women, girls and even boys frequently become victims of mass rape by so-called rebel groups. Corruption, exploitation, traumatisation, fatigue, the fight for minimal democratic rights and the lack of adequate health care mark the lives of the majority of the people. That is so even in Kinshasa, the capital city.

The people are exhausted by the adversities of daily life, which range from transport problems and torrential downpours to disease and fear of physical violence or abuse by government institutions. Money is always short, whether for water, medical treatment, electricity, telephone subscriptions or wages.

Physical exercise or sports can provide release, give a person structure, encourage and strengthen them. It can also be oppressive, however. Sports and physical activity can open up behavioural alternatives or reinforce existing roles. This is true everywhere, but especially so in a country like the DR Congo. As all experience of life is linked to the body, there is a risk of negative experiences being exacerbated, dissociating people from themselves and causing retraumatisation in the worst cases. Sensitive healing is possible too, however.

Far too often, sports – whether in Europe, the DR Congo or elsewhere – are designed to serve pedagogical, political and religious purposes. Rules are imposed on the body until the conscious mind is persuaded that they seem right and it no longer raises questions. For example, this is evident even 55 years after independence from Belgian colonial rule in Congolese schools, where youngsters are still drilled in an authoritarian style reminiscent of a Prussian sense of discipline. Boys, however, are generally allowed to romp around and play more freely than girls.

Another approach to exercise makes more sense – one that aims to promote emancipation and change, especially in gender roles. This approach can draw upon many national traditions, including music and dance, and it has given both deep joy and strength to many women and men in the DRC.

Bibiche Kankolongo puts it like this: “Sport is a great instrument for peace that we can use to reconcile communities and individuals locked in conflict.” She believes that shared sports experience overcomes barriers and enmities. She sees a connection between sports and peace. In order to engage in sports, she says, we need both external and inner peace.

The YWCA-DRC project had teething troubles. After three months, discontinuing it was discussed. There were problems concerning premises and materials as well as cultural and age-related differences in the team. But the initiators endured. They could not find affordable premises, so they opted for a small, uncomfortable room at the YWCA-DRC, where they ran exercise sessions with groups of seven to twelve women. The emphasis was on rhythm, coordination and training one’s dorsal muscles.

However, the response of some women was frustrating. They said things like: “I’m tired after work” or “I’m thirsty and hungry.” Ideas for improvements emerged over the weeks. For instance, more water was made available. Moreover, it proved to be better to start sessions seated or lying down rather than standing upright. Chairs actually have a symbolic relevance: they signal security and privacy, and that is appreciated by women who have suffered severe traumas. The chairs have thus become a therapeutic aid. Women were given the liberty to stand up and choose where they wanted to sit.

In the meantime, a lot has been achieved – though it still seems like a drop in the ocean. In 2013, a swimming group was set up. It has been attracting new participants ever since. There were two eight-week training groups on “Sport and Movement for Post-Traumatic Stabilisation”, and three seminars on Wen-Do, an empowering form of self-defence for women. More courses are planned in Kinshasa and in partner projects south of the capital this year. A back exercise group open to everyone meets regularly in a nice room at the Maison de France, which belongs to the Institut Français, and there is a new group for “Sports for Women after Breast Cancer”. Women enjoy exercising at the YWCA, moreover, using various kinds of balls, mats and a mini-trampoline during breaks.

Does sport really help to build peace? Abuse and corruption scandals, doping and right-wing hooliganism seem to suggest otherwise. But Bibiche Kankolongo and her fellow campaigners know they have a positive impact: “Participants’ self-respect and self-confidence are growing,” she says. She also notes a general improvement in stamina and physical fitness. Some participants report a measure of relief from pain and illness. “Team spirit and personal relationships have grown,” Kankolongo adds. “Exercise is experienced as a moment of happiness and stress-relief.”

UN Secretary-General Ban Ki-moon is convinced of sports’ impact on development. In April 2014, he told a conference on Celebrating Sport for Development and Peace in New York: “Sport helps reduce stigmatisation and promote the integration of marginalised minorities and people with disabilities.”

A comparatively small investment can have a dramatic effect. Ban Ki-moon concludes: “Sport is a low-cost, high-impact tool.”

YWCA-DRC staff are similarly convinced that their work is meaningful. They sense moments of peace in participants, and that is more than just the temporary absence of the daily fight for survival. During exercise and movement, the people radiate an inner strength and there is hope in their eyes. Sport and movement give momentary strength and serve to untangle the psychological knots caused by trauma.

Susanne Bischoff is a sports and movement therapist specialising in psychological issues.  Since July 2013, she has been working with the Young Women’s Christian Association of the DR Congo (YWCA-DRC) as a Civil Peace Service expert deployed by Bread for the World – Protestant Development Service, non-governmental German agency. The project in the DR Congo is supported, among others, by Werder Bremen, the Bundesliga football club.