Ever since the tragedy at the Rana Plaza garment factory in April 2013, the international public has been concerned about textile workers’ plight in Bangladesh. International pressure has forced political and economic action. Although conditions are still miser­able in many facilities, some entrepreneurs are improving working conditions. Sabine Balk of D+C/E+Z had the opportunity to visit model factories in and around Dhaka, the capital of Bangladesh. 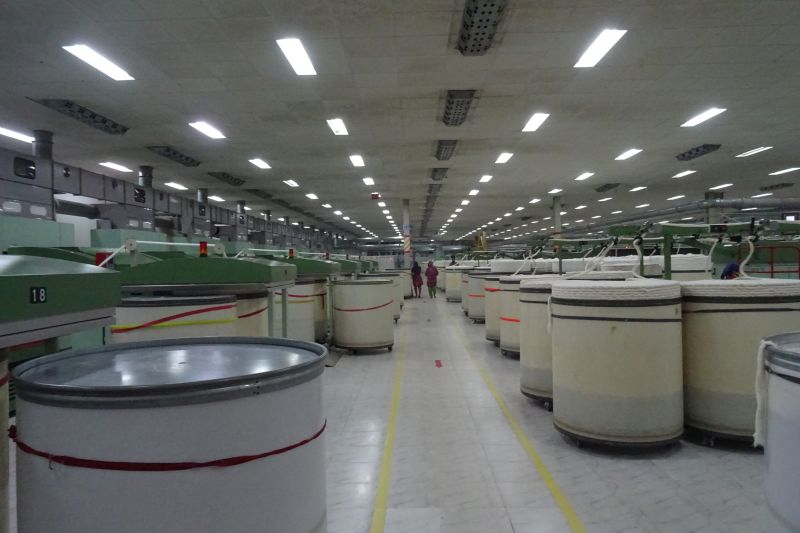 sb The spinning mill of the DBL Group is clean as a whistle.

“I want our employees to be well. This is a social obligation that entrepreneurs like us simply have,” says Muhammad Abdul Jabbar, guiding our group of German visitors through the huge spinning mill. He is the manager of the DBL Group. It also runs factories in Savar, the suburb of Dhaka where 1,127 people were killed and over 2,000 were seriously injured four years ago when the Rana Plaza building collapsed. In recent years, Bangladesh’s garments industry has become internationally infamous for shoddy construction, lacking fire safety and emergency exits, miserable working conditions and slaving away without breaks.

The DBL Group proves that change is possible in Bangladesh. Of its 25,000 employees, 45 % are women. The company reported a revenue of $ 365 million in the fiscal year 2015/16. It not only has its own sewing unit, but also spins, knits, stains and dyes its own textiles. The main customers are foreign corporations, including German ones. They include the likes of Lidl, H&M, Esprit, Puma, Tom Tailor, Walmart and the G-Star brand of jeans. Like its competitors, DBL supplies both bargain stores like Lidl and H&M and more upmarket, expensive brands like Puma and Esprit.

The DBL management declares it intends to “uphold the reputation of the clothing and textile industry in Bangladesh”. Even to those who have never seen a typical textile mill, it is clear that DBL is a model corperation. While garbage and waste piles all over Dhaka’s narrow and unpaved access roads, the DBL premises are immaculate. In front of the company headquarters, a sign on a green lawn with flowerbeds states: “think green.” Green is a rather rare sight in Dhaka. The tall palm trees are droopy and, like all the other plants, colored beige-grey from the dust and smog. Not so on the premises of DBL. The floors in the spinning mill and dye works are sparkling clean. There are no scraps lying around and no odors in the dye works, which is unique according to people in the know. They say dye works normally stink of the chemicals used in production.

The DBL factory filters, purifies and recycles water in its own treatment system. The lunch prepared for the management includes fish from the company pond. The DBL Group owns fish ponds as well as greenhouses where vegetables are grown. It even keeps dairy cows.

DBL does a lot for its employees. There is a free company-sponsored daycare centre. It even takes care of babies. They lie sleeping in bamboo cribs, supervised by several women. There is a nursing room for female employees who wish to breastfeed their babies during breaks without being disturbed. Young children move around freely in a large room with toys. They are excited about the unexpected visitors.

There is a clinic on the company premises. A doctor and a consulting office give advice on family planning. These services are used frequently. About 15 women – or couples – visit the office every day, says paramedic Nasrin Sultana, who is currently on duty. She is sitting in a small room with a couch, informational pamphlets and a box of contraceptives. Various methods of birth control, from condoms to pills, are displayed and explained here. Sultana examines women and men, and she gives advice on contraception and family planning. The office also distributes contraceptives. Most of the female factory employees do not want more than one or two children. They want to stay in the workforce and support their families. “Injectable contraception (MPA/Depo-Provera) is the most popular contraception,” Sultana says. Doctor appointments and consultations are free for DBL staff.

According to the management, the company store is very popular too. It sells foreign products such as hygienic items, chocolate and cereal at reduced prices. Sanitary towels are the most popular subsidised product. Women appreciate them, because without them, they would have to rely on old or chemically treated scraps of fabric, or simply not go to work when they are on their period.

“We care a lot about the Sustainable Development Goals (SDGs), most of all Goal 1, poverty eradication,” says top-manager Jabbar. Many partners have come on board for this purpose, including UNICEF und CARE as well as the GIZ and DEG, Germany’s development finance institution, which is part of the KfW banking group.

In its 100-pages Sustainability Report, the company lists numerous initiatives – from “Breastfeeding in the workplace” and the “Female supervisors leadership programme” to the “Community knowledge exchange programme.” Additionally, DBL supports educational initiatives and business start-ups in the community.

DBL employees are only paid about 10 % more than the meager legal minimum wage, which is the equivalent of about € 70. Critics say a living wage would have to be at least € 180 (see article in D+C/E+Z e-Paper 2017/4). Jabbar says the company provides its employees with social benefits through the initiatives listed above. Higher wages, however, would immediately lead to higher rents, so local inflation would balloon.

DBL’s social and sustainability engagement certainly costs money. Tough competition, however, means that cost pressure is intensive. The DBL Group strives to keep its costs low through efficiency, the manager explains. It is also planning to set up production facilities in Africa where labour is even cheaper than in Bangladesh. In the summer, a factory in Ethiopia will start operations with 5,000 employees. Workers from Bangladesh will teach them. For Ethiopian workers, the factory is probably a godsend, but jobs will be lost in Bangladesh.

The factory premises of Zaber & Zubair (Z&Z) are not as idyllic and spacious. They are in an urban area of Dhaka, and 1,400 people work here. To get there, one has to pass through narrow allies. The big trucks that bring tons of textiles to the harbor in Chittagong every day use them too. Urban streets and rural roads tend to be overburdened in this densely populated country. The 300 kilometer trip from the 15-million-people metropolis of Dhaka to Chittagong can take up to 12 hours.

Zaber & Zubair belongs to the Noman Group, which operates 32 factories and employs about 60,000 women and men. The factory we visit was set up in 1994 and predominately produces household linens for multinational corporations like IKEA, Aldi, H&M, C&A, Lidl or Walmart. It is exhilarating to see IKEA fabric coming out of the rollers and to know what kind of bed sheets will be on offer next season. One is pink and decorated with the comic characters Minions. It is most likely meant for a child’s room.

Z&Z is especially proud of its achievements in regard to environmental protection and sustainability. In partnership with the GIZ, Z&Z operates a biological water treatment facility and a solar power system. The treatment tanks are on the roof. The water is recycled and used again in production. This is anything but the norm in Dhaka, as the murky river that flows alongside the factory shows. Its banks covered in garbage and waste.

30-year-old Parvin has worked as a seamstress at Z&Z for the last three years. She had previously worked in a different factory. “I prefer to work here, because I get one day off per week and have more vacation than I did before,” she says. She has two children who attend school during the day. She earns the equivalent of € 46 a month – that would appear to be lower than the minimum wage of € 70. But the actual level of the minimum wage can never be agreed upon, and no one says the same thing. Parvin’s husband works as an ironer at Z&Z. He earns more than she does, she explains, because his work is more difficult – or so it is said.

Sabine Balk is a member of the editorial team of D+C/E+Z.
euz.editor@fs-medien.de