At home, Germany and other industrialised states consider social protection very important and spend a lot of money on the matter. But when it came to development assistance, the idea of social transfers to the needy was next to taboo around the world for a long time. Things are changing – and that may help put an end to extreme poverty. 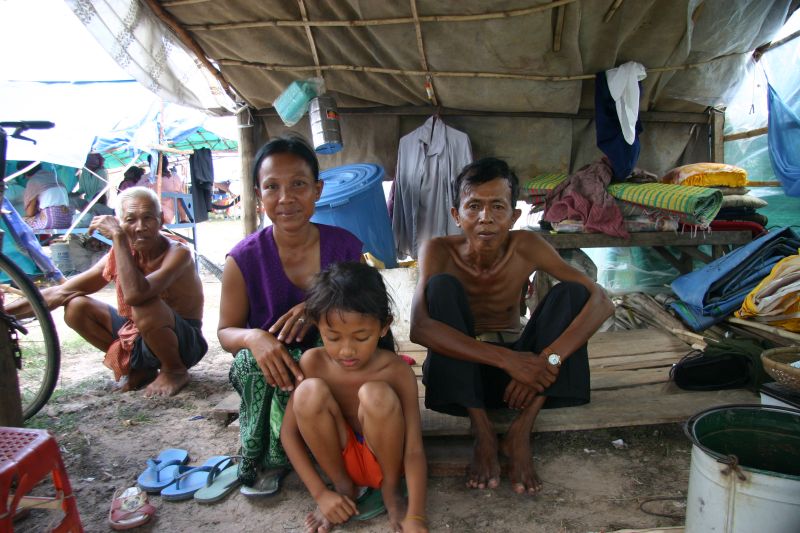 kd Illness has made the breadwinner (right) in this Cambodian family unfit for work.

A new trend has been building up for about a decade. In a number of countries, support has been provided to set up health insurance schemes, for example. The focus, however, was primarily on technical insurance issues rather than financial contributions.

In recent years German official development assistance (ODA) has contributed to providing extremely poor target groups with health care vouchers. However, the Federal Ministry for Economic Cooperation and Development (BMZ) and its agencies remained sceptical in regard to cash transfers to the poor, even when such transfers were linked to conditions such as children’s regular school attendance. With only few exceptions, including a programme in Malawi, Germany did not support such schemes.

As recently as 2011 and 2012, the Bundestag, Germany’s federal parliament, rejected proposals that would have provided social cash transfers to poor people in partner countries. In June 2016, however, the discussion opened up anew. For the first time, the Bundestag explicitly called for stronger German involvement in social protection in developing countries. The new approach should include (temporary) social cash transfers, but it is too early to assess the decision’s impact. It is very unlikely, however, that Germany will buck the trend towards supporting social protection in ODA efforts.

Other donors, for instance the UK, have been taking this approach with vigour for years (see article in E+Z/D+C e-Paper 2017/01). The Asian Development Bank (ADB), moreover, has been supporting social-protection programmes for a long time in countries like the Philippines and Pakistan. These programmes serve primarily to boost school attendance among poor children. In both cases, ADB loans worth about $ 400 million have triggered national efforts that cost ten times as much.

The impact of such measures needs to be assessed. One evaluation showed that making conditional payments of about $ 15 a month to poor households with school-age children in the Philippines meant that almost all children in extreme poverty were sent to school in the years 2012 to 2015. The national school enrolment rate rose from 92  % to 98  %. In Pakistan, social cash transfers are now the third priority in the national budget.

Providing social assistance to the extreme poor will significantly shape development aid in the future. There are many questions, however, concerning how such aid will be distributed. The first challenge is to identify the poor. This is easer said than done in countries with weak logistical capacities and serious governance problems. The methodology used by Pakistan’s government costs more than $ 120 million, which is certainly too expensive for most countries. And since poor people’s circumstances tend to fluctuate considerably, poor households must be identified more often than only every five to seven years.

Cambodia’s “ID Poor” programme, which was designed in part with German support, can serve as an economical and participatory model. The programme identifies poor people through a relatively transparent process and allows families who have not been categorised as poor to gain insight into why others are considered to be poorer than they are. This approach boosts acceptance of the cash-transfer scheme even among those people who do not benefit personally.

The people who have been categorised as poor are given an ID card and thus get access to free health care, for example. The programme is run by the Health Equity Fund, a national agency, which gets a part of its funding from Germany’s KfW Development Bank. Another strong point of the Cambodian system is that poor people can be covered by the health programme even if they do not have an ID Poor card, provided they fill in a short questionnaire.

One contentious issue is whether cash transfers should be linked to conditions. There is no easy answer. In Chad, for example, it would not make sense to require expecting mothers to regularly visit health centres or children to regularly attend school. The reason is that doing so is not possible everywhere in the country. In such settings, unconditional payments to poor households are the only option.

Yet another issue is widespread corruption. According to official policy, for example, one third of the people of Tajikistan in Central Asia have been getting compensation transfers for rising energy prices in recent years, but investigations have shown that hardly anyone has actually received such benefits.

In the future, social cash transfers could be made by mobile phone, and that would reduce the scope for fraud at the grassroots level. Kenya has been using the M-Pesa service to this end with great success for ten years. Other models are being tested all over the world. It will, however, take time to find the right solution for every situation. We must bear in mind, for example, that the most important indicator of a family’s extreme poverty today is that it does not have a mobile phone.

Another challenge is to determine who exactly should get the monetary transfers in order to achieve the strongest anti-poverty impact. Should “the household” be paid, or perhaps just mothers, who would then use the money primarily to provide food for their families?

German ODA will likely devote more attention to these questions from now on. The upshot is that German aid may help to lift the poorest of the poor above the poverty threshold by 2030 without leaving any­one behind. That is what the Sustainable Development Goals (SDGs) demand. Moreover, a fundamental decision will have to be made concerning the provision of a basic income to approximately 250 million people worldwide who cannot help themselves because they are too old, too young or too disabled to work. For obvious reasons, self-help-oriented ODA will always bypass these people.

Frank Bliss is a professor of social anthropology at Hamburg University and is currently investigating how state development cooperation can better reach extremely poor, vulnerable and food-insecure people as part of a research project run by INEF (Institute for Development and Peace at Universität Duisburg-Essen) and Germany’s Federal Ministry for Economic Cooperation and Development (BMZ).
bliss.gaesing@t-online.de