Shaking up the rural world

Improving infrastructure and opportunities in rural areas is key to eradicating hunger and poverty. Entrepreneurship and job creation depend on a facilitating environment. 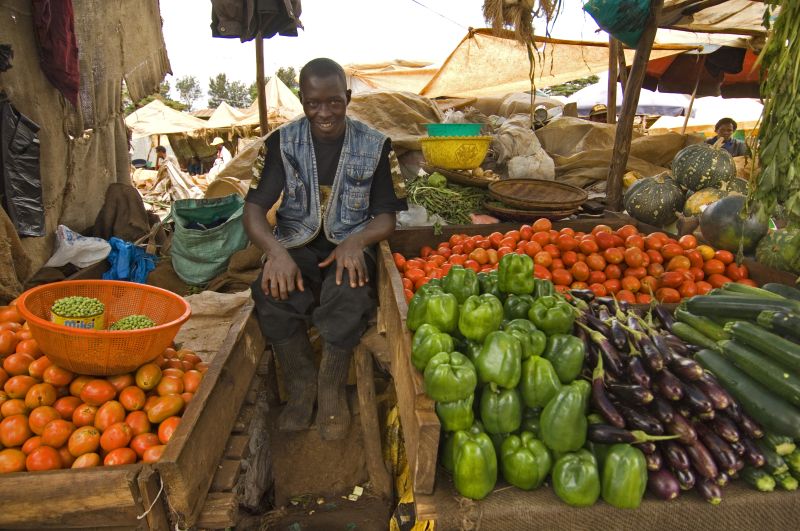 Akinwumi Adesina, the president of the African Development Bank Group (AfDB), warns of a “disaster triangle” that is haunting his continent: poverty, youth unemployment and climate change. These phenomena make young people susceptible to extremist agitation and even to recruitment by terrorists, he says. He would like to see something like a “poverty eradication index” that holds officials accountable for the goals they have set.

The crucial challenge is to create opportunities for young people, especially in rural areas. In Africa, some 440 million young people will join a highly competitive labour market between now and 2030. So far, there simply are not enough jobs. Well-paying employment is hard to find in the fast-growing cities and even harder to find in the rural areas, where most Africans still live. As populations grow, food demand grows too, however, and accordingly, rural areas may benefit from providing food to cities.

Agripreneurs can be quite successful, even while masses of African smallholder farmers struggle to keep their heads above the water, and many are stuck in subsistence farming. Noi Paulina Selepe from Lesotho is an example. She was trained as a teacher, but has become a poultry farmer. In just a few years, Selepe has grown her poultry business to producing several thousand chickens every month. She did so by joining forces with local farmers to supply hotels and supermarkets in her region.

She is now the secretary general of the National Lesotho Farmers Union, representing 36,000 farmers. “It is my dream to change other people’s lives,” the teacher-turned-livestock farmer says. She sees opportunities for young people who make smart investments in agriculture and adds that they can exploit technological advances.

Entrepreneurship matters, agrees Muhammad Yunus, the Nobel Prize winner and founder of Grameen Bank, the pioneering microfinance institution from Bangladesh. “Human beings are entrepreneurs,” he pointed out at the conference “One World – No Hunger. Future of the rural world”, which was organised on behalf of Germany’s Federal Ministry for Economic Cooperation and Development (BMZ) in Berlin at the end of April. In Yunus’ eyes, many of the millions of young Africans looking for livelihoods can start businesses, and such businesses deserve to be promoted.

Tony Elumelu, one of Nigeria’s most successful businessmen, sees things in a similar way. He established a foundation in 2010 to invest $ 100 million over 10 years in young African entrepreneurs. The foundation gives out no-strings-attached seed capital and offers a mentoring programme for applicants with good ideas.  Elumelu says: “Of course, Africans have to lead.”

Entrepreneurs need a suitable environment, however. Mo Ibrahim, the Sudanese-British entrepreneur and philanthropist, points out that things that matter include good governance, human rights, protection against discrimination as well as reliable infrastructure. “How can you do business in a place with no electricity?” he asks.

For too long, African economies have depended primarily on commodity exports. However, money made in sectors such as mining, oil and gas was not used to diversify economies, Ibrahim says. What is needed now is to shift the focus to the rural sector and take a long-term view. Services must be provided, he argues, since nobody wants to live in places “where there are no lights, no broadband, no good schools, no good medical facilities”.

The conference participants adopted a document called the “Berlin Charter” (see box). It calls on G20 governments to promote “transformative change”. The key, they say, is investment in rural areas to support infrastructure and services, along with large-scale, active labour market policies. The aspiration is to lift at least 600 million people out of hunger by 2025.

Creating jobs and improving the long-term outlook for young people in rural areas is one of the goals of Germany’s current G20 presidency. “Only strong rural areas will be able to prevent hunger crises in the future and offer truly good prospects to young people,” says Gerd Müller, Germany’s federal minister for economic cooperation and development. “The future of humankind will be decided in the world’s rural areas.”

According to him, it is possible to eradicate poverty and hunger, reduce the exodus from rural areas and safeguard sufficient food supply for a growing world population if rural areas get innovation and new impetus. To make globalisation fair, policymakers must ensure that rural areas do not lose out.