Looming minority rule in the USA

At the UN climate summit in Glasgow in early November, US President Joe Biden reassured everyone that his country had rejoined the Paris Agreement and would live up to commitments. However, Congress had not passed the policies he wanted. Had they been the law, his words would have been more convincing – and more influential. 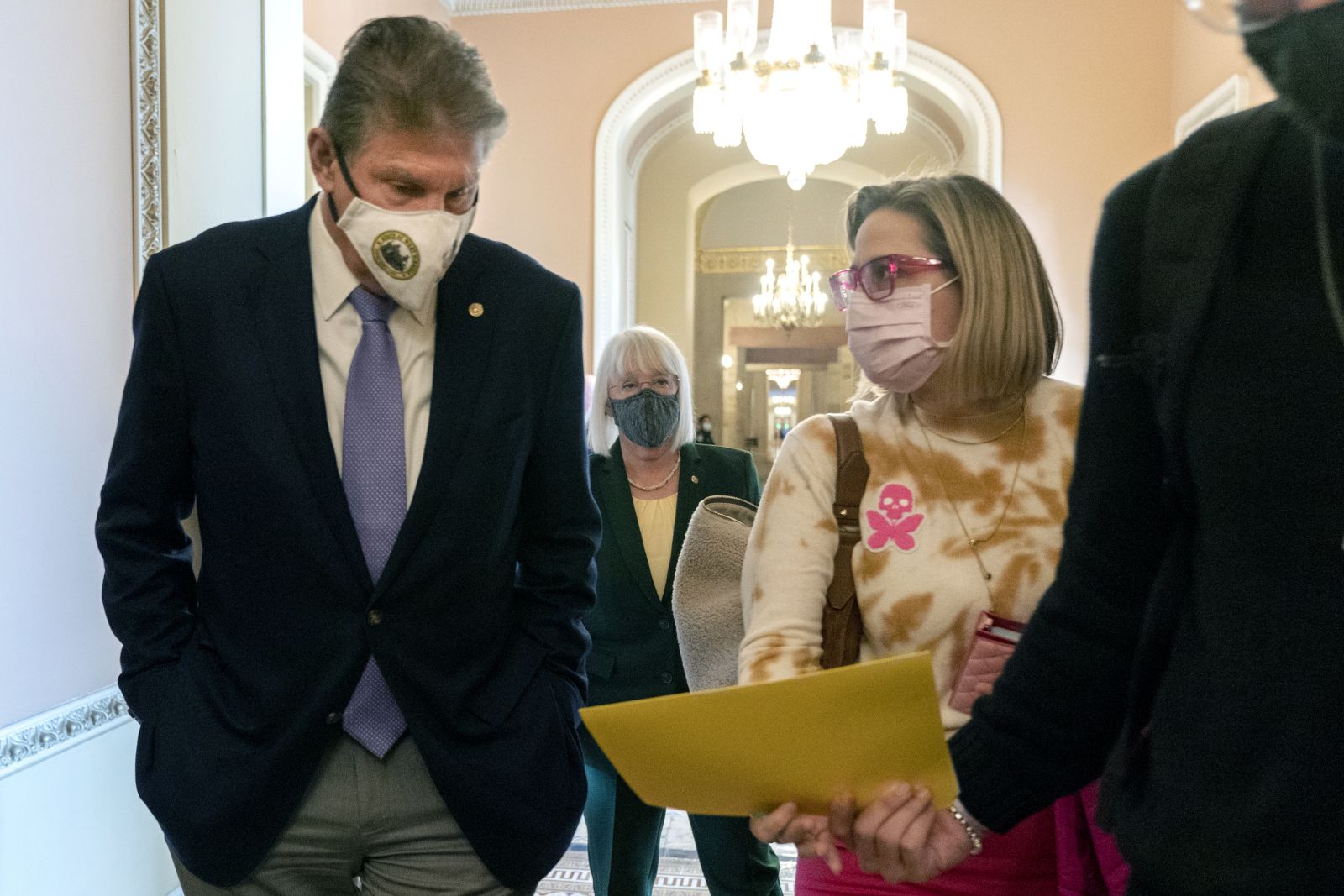 picture alliance / ASSOCIATED PRESS / Jacquelyn Martin Joe Manchin and Kyrsten Sinema are two Democrats in the Senate who are increasingly resented by their party’s base.

Three months later, the US Senate has still not passed the Build Back Better (BBB) bill with which Biden wants to mitigate the climate crisis (see main story). The main reason is that Biden’s Democrats only have a very slim majority. There are 50 Democratic and 50 Republican Senators, and Biden’s Vice President Kamala Harris casts the 101st vote when the Senate is tied. BBB thus needs the support of each and every Democrat in the Senate. Two of them – Joe Manchin of West Virginia and Kyrsten Sinema of Arizona – are not on board, arguing BBB is too expensive.

The Democratic base increasingly resents Manchin and Sinema. However, there is a deeper, systemic problem. The two senators’ excessive power results from Republicans being overrepresented in the Senate. Each state has two senators, no matter how many people live there. California with 40 million and Wyoming with 600,000 people both have two senators. This formula ensures that rural, predominantly white areas are overrepresented. All in all, Democratic senators currently represent 40 million more people than their Republican counterparts do.

Making matters worse, neither Puerto Rico with more than 3 million inhabitants nor Washington DC with 700,000 are states, so they are not represented in the Senate at all. Puerto Ricans are mostly Hispanic, and Washington has large Black community. Both places would probably elect Democrats. If each had two senators, Manchin and Sinema would matter far less.

The political system is not balanced fairly. Conservatives’ advantages sometimes lead to minority rule. Biden won a convincing majority, and, in both Senate and House elections, far more voters opted for Democrats who endorse climate action than for Republicans who do not. Nonetheless, climate action is stalled.

In a similar way, who becomes president does not depend on who gets the most votes, but who wins the electoral college, in which states, not citizens are represented. In 2016, Donald Trump won the presidency even though Hillary Clinton, his opponent, had almost 3 million more votes. He was ahead in three swing states.

Today, many Trump supporters endorse the lie that he did not lose in 2020. There was an insurrection in the Capitol, but most Republican legislators now deny anything big has happened.

The Supreme Court is not balanced either. Republican presidents have appointed six of nine Supreme Court justices. Trump, whose approval rating never reached 50 %, appointed three, who were then approved by a Senate majority that represented less than half of the nation’s people. In the first case, Republican Senators had kept the seat open for months arguing they had seen how voters would decide in the 2016 elections. In the third case, they rushed the nomination through only days before the 2020 elections which cost them the Senate majority and Trump the presidency.

The policy implications are huge. In January, the Supreme Court blocked Biden’s executive order to introduce additional Covid-19 rules. Employees of big companies were supposed to be forced to either get vaccinated or get tested and wear masks at work. According to a recent poll, 52 % supported this policy, but the court decided it would excessively restrict personal choice.

Biden likes to tell allies that “America is back” after the erratic Trump years. His rhetoric is not entirely convincing. International observers know Trump or someone like him may become president again. They are aware of Republicans changing election laws at state levels in ways that increase that probability. Democrats in Congress want to pass national legislation that would reduce the scope for manipulation, and majorities of voters appreciate that. Once more, however, Manchin and Sinema are not cooperating.

Diplomats from other nations must tell them that they are undermining the soft power of the USA. It would make sense to send the same message to Republican legislators too. If the US does not lead by example, it ceases to lead. It failed in the Trump years, and its democracy still looks frightfully shaky (also see Hans Dembowski's Blog on www.dandc.eu).

Katie Cashman is a project coordinator and climate policy associate with the Minnesota Center for Environmental Advocacy (MCEA). The views she expresses in D+C/E+Z are hers, not those of the MCEA. She previously worked with international sustainable development organisations.
kcashman23@gmail.com

“This is not tax-payer money”