To many young women in Guatemala, a job in a maquila – a garment or textiles factory – seems to promise an escape from poverty. The workers, however, must cope with abuse and very long hours. The wages are too low to really improve poor people’s situation. The government largely ignores their plight, but wants to introduce new tax exemptions for investors. 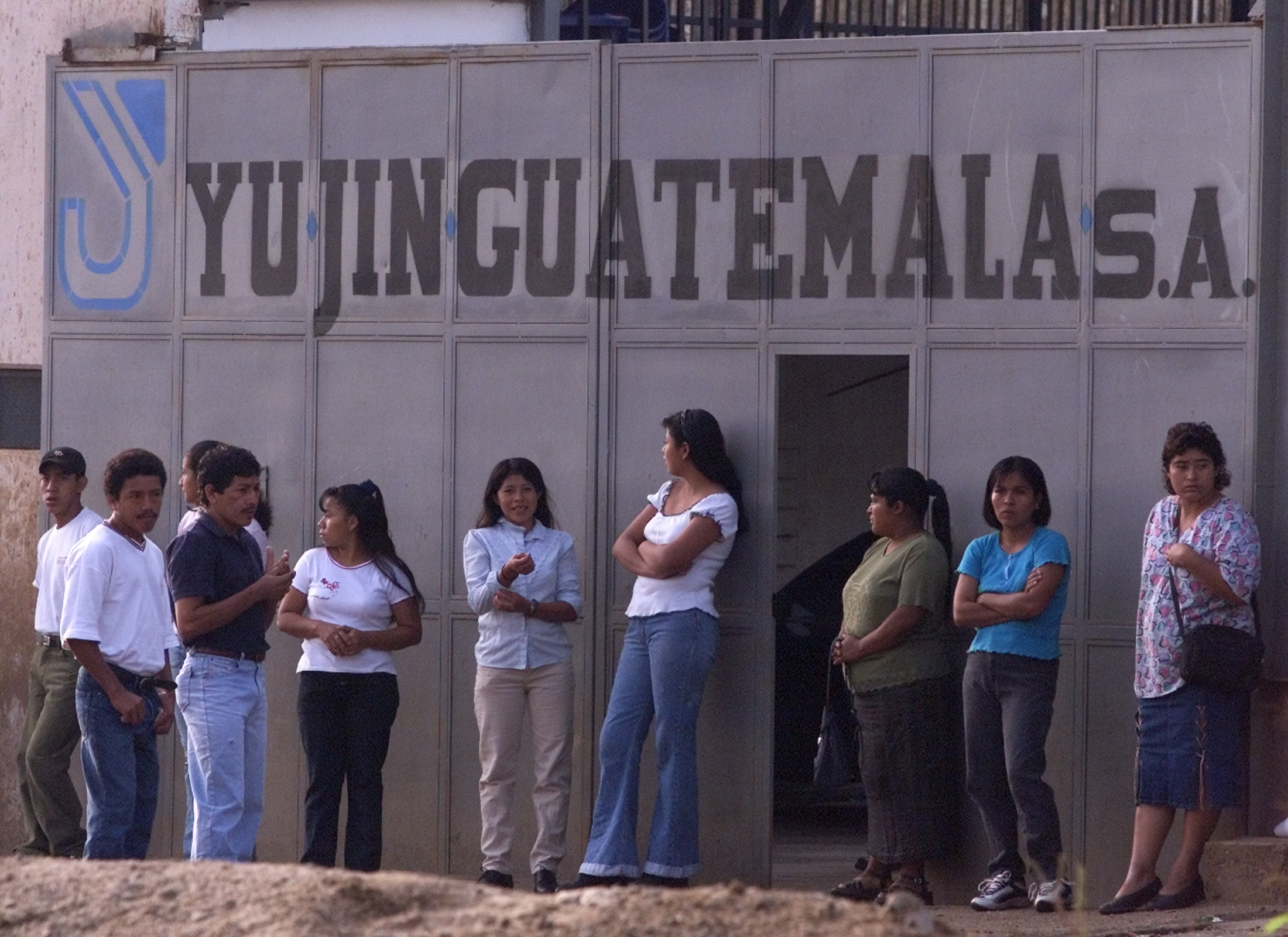 Daniel DeClair/Reuters Maquila workers waiting for their shift to begin.

Christmas and New Year do not mean much to Matilde. The company she works for did not pay her the 13th monthly wage she is entitled to by law. Employers are under obligation to disburse the money by 15 December, but many do not do so. As hundreds of other garment workers in Guatemala, Matilde is used to seeing her rights violated year
after year.

The maquilas, as the major, export-oriented clothing factories are called, began to grow in Guatemala in the 1980s. In line with the Washington Consensus and the structural-adjustment policies promoted by the International Monetary Fund and the World Bank at the time, the government of Guatemala was attracting international investors with tax breaks. The idea was to generate employment and foreign-exchange revenues.

The maquilas have indeed created lots of jobs, but not good jobs. They are known for exploitation and violence. Labour laws are often broken. Most formally employed women in Guatemala work for maquilas. The government should act on their behalf, but it is only eager to woo international investors.

Maquila workers make garments from textiles and other components that are imported to Guatemala. Most clothes they produce are exported, to Europe and the USA in particular. This export-oriented industry has become an important sector of Guatemala’s economy. Sales amounted to more than $ 1 billion from January to October last year – which is equivalent to about three percent of GNP. In Guatemala today, there are 139 garment factories, 39 spinning mills and other textile manufacturers as well as 240 companies that offer relevant services.

The maquilas are regulated by the Law on the Promotion and Development of Exports. This law stipulates that, for the first 10 years, foreign investors are exempted from paying income taxes, import taxes and duties as well value-added tax for machines, tools, plants and components. Moreover, they can set up shop anywhere in the country.

Many companies cheat. After the 10 year-period, they change their address or close a facility, only to re-start under a new name at another place. That is also how they act when grievances become known. Moreover, they tend to rely on small subcontractors in order to save compulsory contributions to governmental social-security schemes. The Ministry of Labour and Social Affairs and the Ministry of Economic Affairs close their eyes to these facts.

No formal training is needed to work in a maquila. Some dexterity in stitching parts together will do. The employers like to hire poor women with little or no education, because they tend to be obedient and subser­vient. The workers’ average age is 27. Many are single mothers who left their villages in search of work.

Maquila workers are formally employed, but their employment is not stable and barely regulated. International investors want great flexibility and insist on piece-work. They violate human rights and labour laws daily. The pace of the work is too fast, so it wears people out. Companies keep increasing the workload, and it is impossible to get one’s job done in eight hours. Many women work 10, 12 or even more hours per day, and overtime is not paid.

There are no breaks, and access to toilets is restricted to certain times. As nobody cleans the toilets, they tend to be extremely dirty and unsanitary. Production facilities lack relevant tools or only provide too few of them. Ventilation and lighting are deficient. Loud music is played, supposed to keep workers “awake”. Gloves and protective gear for mouth, nose and ears are not made available. There is no drinking water. Women are verbally abused, threatened and sometimes beaten. Indigenous women suffer in particular. They are humiliated, sexually harassed and even raped sometimes.

Guatemala has signed international agreements and treaties regarding workers’ rights. However, the authorities are not fulfilling their duties to enforce the rules. In 2008, a minimum wage was defined for maquilas, but it is below the minimum wage appli­cable for other non-skilled work. Currently, the average maquila worker earns the equivalent of about $ 290 per month, plus a bonus worth $ 33. That is not enough money to fulfil basic needs, which, according to official estimates, would require $ 423,42.

Globalisation has had a negative impact on the situa­tion of factory workers, and women must bear the brunt. To be hired, they need to provide a medical certificate to prove that they are not pregnant. Protective laws concerning maternity are disregarded. Women, moreover, are paid lower wages than men, even when they do the same work, have the same skills and are equally experienced. Men are promoted to management positions, because employers believe they are better leaders. Gender discrimination is blatant.

Racism haunts the maquilas as well. Initially, most of the workshops were in the agglomeration of the capital city. Most staff came from ethnically diverse urban areas or the surrounding regions. But when Korean investors began to play a role, factories began to be set up in rural areas, and they soon hired indigenous women. Many of these women only have the choice between working in a maquila or serving a well-to-do family as a household helper. Either way, they suffer discrimination and must submit to others’ demands. Racism is omnipresent in Guatemalan so­ciety, undermining the self-esteem of women and compounding work-related problems.

Many women accept tough working conditions in a maquila because they are poor in order to make at least some money that will help them cope. Unemployment has been getting worse recently. According to the National Labour Policy 2012-2021, a government document, some 71 % of women are unemployed. It is hardly surprising that many of them do precarious work and even accept violence in such circumstances.

In many cases, the women concerned are the only persons in their family to have an income. According to the researchers and authors of the book “Nos hacen llorar” (“They make us cry”), Teresa Chocoyo and Heliodoro Cumes, it is possible to find maquila jobs fast, and families often put pressure on women to earn money they desperately need. Tough working conditions are of little concern to families in this context.

In spite of all these problems and in view of tax exemptions that are already generous, President Otto Pérez Molina wants legislators to pass even more business-friendly laws. For instance, there is a draft for a law to promote investments and employment that would grant additional tax breaks for up to 55 years. The draft was recently retracted in view of protests staged by civil-society activists, especially women’s organisations. The chambers of commerce, however, are still campaigning for this draft to become law.

Congress is about to decide on a draft law concerning working hours and inclusion in governmental social-protection schemes. The government introduced it with the declared goal of “supporting women who do not neglect their children’s education and their household duties”. Women’s-rights activists oppose this draft because it reinforces the idea of women primarily being house wives and mothers. Trade unions and labour-rights activists also vehemently oppose the draft, as it intends to make working relations more flexible and will lead to lower wages especially for young people, women and the elderly.

The president managed to push through another business-friendly law however. Beginning in January 2015, special economic zones are to be established in four of the poorer municipal areas. The minimum wage paid in these zones will amount to a mere $ 197 per month. Many maquilas are likely to relocate to those places in order to benefit from cheap labour. Unemployment will soar where they have been producing so far, and the poverty of hundreds of thousands of people who depend on maquila work will get worse. These people are unlikely to find other jobs because they lack skills and formal edu­cation.

Jorge Tobar Montañez of El Heraldo de Chihuahua, a Mexican newspaper, argues that the growth of Central American maquilas is a result of globalisation. International companies are taking advantage of “countries’ comparative advantages, which is cheap, female labour in this case”. The willingness of young women to do poorly paid work in exploitative circumstances is what attracts investors to countries like Guatemala.

The women themselves hardly benefit. Maquila work does little to alleviate poverty. Of course, governments must create environments that attract investors and foster economic development, but they must ensure that this goes along with decent work and fair wages.