The importance of legal certainty concerning land rights cannot be overstated in the context of fighting poverty. This is evident in Cambodia, for example.

last contributed to D+C/E+Z in winter of 2020/2021 as geographer and spatial planner at the University of Duisburg-Essen and independent development consultant. 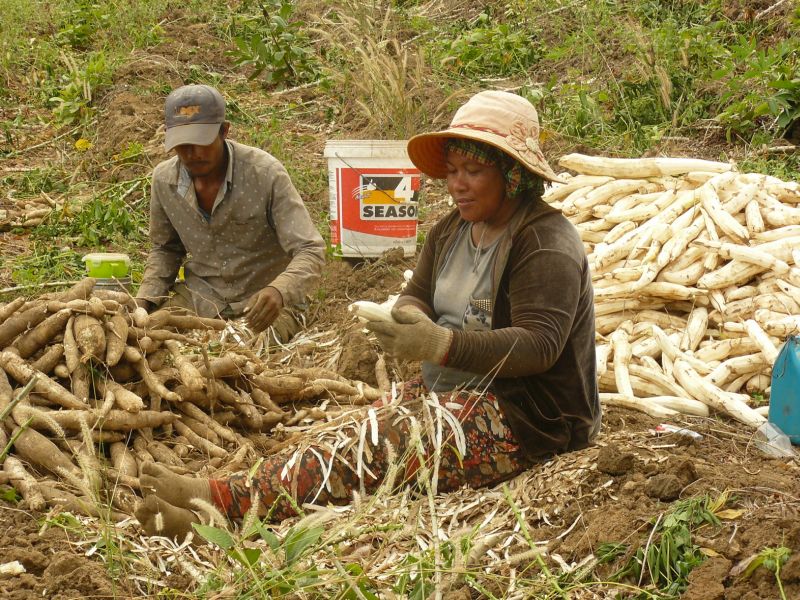 In the world’s poorest countries, as well as in many low-income countries, agriculture is very important – and so is access to land. The share of agriculture in countries’ gross domestic product (GDP) may tend to shrink, but in many places, this sector (including livestock farming) still offers the most job opportunities. In Cambodia, it accounts for almost half of all employment as well as 26.7 % of GDP. In Kenya, it employs three quarters of the entire workforce and contributes 32.7 % to GDP. In Ethiopia, 85 % of the labour force work in agriculture (CIA, 2017).

Given these statistics, the livelihoods of large numbers of people depend on access to agriculturally viable plots. All over the world, however, smallholder farmers are increasingly being deprived of the land they need – be it through land grabbing or through the conversion of farm land into urban land, much of which is then sold. Often questionable legal means are used. Papua New Guinea (where an estimated 3.8 million hectares of land have been irregularly grabbed), Indonesia, South Sudan, the Democratic Republic of the Congo and Mozambique (where shady deals concern more than approximately 2.2 million hectares) are currently the world leaders in terms of land use changes (Land Matrix 2017). Such changes almost always mean the dispossession of the traditional owners and are therefore nothing more than “land grabbing” (Bread for the World 2016).

In Ethiopia, the selling off of land has become a topic of hot debate in the past few years. Even the state-controlled media address it. The main point of contention is whether the national government or regional authorities should be in charge of land deals. Despite an official “freeze” of land sales to foreigners, almost 1 million hectares have changed hands in the recent past.

In Cambodia, a similar trend began more than 15 years ago (see essay by Sun Narin). New land leases were stopped two years ago, after 712,000 hectares had been leased out. Cambodia’s government has even withdrawn concessions made to domestic and foreign investors who failed to use the land within a certain period of time. All too often, however, the most valuable trees were already felled, or over-exploitation of natural resources had simply continued.

In Cambodia, land deals were stopped because they were becoming politically controversial. First, land was sold to the military and members of the government, and later domestic and foreign investors, especially Chinese companies, benefited. Along with dissatisfaction because of bad governance and increasing socio-economic disparities, the issue of land rights began to have an impact on elections. Suddenly, the Cambodian People’s Party’s grip on power looked shaky. It only narrowly won the parliamentary elections in 2013. As a result, it reconsidered indiscriminate land grabbing and the almost limitless granting of land concessions.

Two programmes have recently gained momentum and are becoming ever more important. They were both introduced more than ten years ago, but were delayed by less than determined implementation. The programmes pertain to the registration of community land titles for indigenous communities and the granting of so-called “social land concessions” to poor rural families.

The first programme primarily concerns Cambodia’s north and northeast. In the province of Ratanakiri, several hundred indigenous villages have filed applications. The registration procedure usually takes several years and requires many bureaucratic steps. At least four ministries are involved. Delays can also result from the determination to find mutually accepted boundaries between villages.

Once there is consensus on the borders, the villages concerned receive provisional titles quickly, so third parties can no longer intrude and expropriate land for agro-industrial concessions. In the past three years, non-governmental organisations (NGOs), which are supporting rural communities, have confirmed such useful impacts. However, the final title must be granted by the Ministry of Land and may cover smaller plots than initially requested.

Some local NGOs are also currently receiving support from German agencies, which in turn get funding from Germany’s Federal Government. Welthungerhilfe and the Knights of St. John have been involved in this way (Welthungerhilfe 2016). The sponsored Cambodian NGOs not only help the village communities to obtain land titles, they also contribute to improving health care, agricultural production and food security.

The programme shows a substantial correlation between secure land rights and better living conditions. The long-term involvement of the local NGOs is important because it tells the people concerned that they are not left alone in the long time that the registration procedure takes.

The social land concessions are part of a government programme that started in several provinces of Cambodia in 2007/2008. The idea was to provide landless families with small units of one to two-and-a-half hectares. The families do not have to pay for the land, but they must meet certain criteria, including proven poverty and not owning any land. Some of the applicants are then granted land in a kind of lottery. This procedure was introduced with support from the World Bank and development agencies working on its behalf.

The plots are almost always relatively low-value bush land, and all valuable trees have normally been felled. The plots are roughly levelled, and access roads are built. Wells are dug, and a minimum amount of construction materials is provided for building homes. The rules initially stipulated that farmers had to cultivate most of the land within one year in order to obtain the official land title. Later, the time span was extended to five years. The basic problem, however, persists: extremely poor people simply do not have the financial resources to make it through the time from first  tillage to harvest. Typically, the families have to continue doing wage work, which keeps them from cultivating their new land in an expedient manner. Most households have proven unable to dedicate very much time to their new fields.

To tackle this problem, a German project was started in 2014. Its goal is to provide sustainable support for resettling poor farmers and helping them bridge the gap to self-sufficient agricultural production. The “Improvement of Livelihoods and Food Security Project” (ILF) allows families to cultivate their new land and simultaneously earn a living by doing paid community work, without having to commute daily between their old homes and their new farm.

The famers are provided with machines such as small tractors and simple irrigation facilities (hand pumps, hoses and pipes). They are also given seed or seedlings for sugarcane and trees with edible leaves, such as acacias or moringa. These things are geared towards quick high-quality yields, to be consumed by the families themselves or sold on the market. Support for starting vegetable gardening, poultry farming or fish ponds serves the same purposes of providing food to the families and laying a foundation for commercial farming. Skills training is offered too. It relates to building, animal husbandry, marketing and healthy nutrition. The project contributes to enabling families to use their new land and meet the conditions for the final registration of their land title. In the meantime, the government has begun to offer training too.

These measures cannot solve the problem that some of the distributed land is quite poor. Some families are fortunate to receive very good land, while others only get average plots. It would make sense to ensure that all families get land of similar value.

Three basic conclusions can be drawn from the Cambodian example with regard to how land rights relate to fighting poverty and boosting food security:

Frank Bliss is a professor of social anthropology at the University of Hamburg and an independent development consultant.
bliss.gaesing@t-online.de

Karin Gaesing is a geographer and spatial planner at the University of Duisburg-Essen and independent development consultant.

FAO, 2012: Voluntary guidelines on the responsible governance of tenure of lands, fisheries and forest in the context of national food security.
http://www.fao.org/docrep/016/i2801e/i2801e.pdf