Africa, you often get frustrated with repeated power outages and frequent bursts of water pipes. You even curse the electricity and water companies for failing to honour their part of the contract. Now, imagine visiting village communities in the remote countryside, a place with no electric power or tap water. 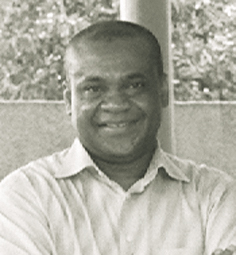 That’s exactly what I did here in Benin, thanks to a trip sponsored by ‘The Hunger Project Benin’. During the field visit, my idea of human hardships and abject poverty changed.

The first village that I visited was Kissamey in the south-­western region of Benin, about 130 kilometres from Cotonou, Benin’s economic hub. But what an ordeal it was to get there, trying to dodge countless potholes, dips and bumps! The driver had to manoeuvre with great dexterity to avoid huge oversize trucks coming from the opposite direction, because they too were trying to avoid the huge potholes on this incredibly narrow road. Meanwhile, I was suffering excruciating pain in my back. On arrival in Kissamey, the villagers gave us a warm welcome, offering fresh water. All of them had put on their best clothes. I guess they wanted to tell us that despite the grinding poverty in the area, people still knew how to receive urban visitors with dignity. I was very moved by their gesture.

In Kissamey, provision of low-cost health care to pregnant women tops the agenda of the Hunger Project’s medical unit. All newborn are immunised against such diseases as polio, tetanus, diphtheria and other life-threatening infections. The new mothers are immunised too. Food security is a key challenge. The Hunger Project has set up a scheme known as “warrantage”. It serves as a shield against bad times. Corn producers receive cash from the Hunger Project when local market prices are low, and their harvest is stored competently. The farmers retrieve their corn once prices have risen. The Hunger Project’s storage facility helps them make more money. Before the scheme was started, cultivators had to sell their goods immediately after the harvest, when prices are low,  and were likely to run out of cash soon afterwards. All too often, rodents, humidity or extreme heat distroyed whatever corn they tried to store.

Training and literacy sessions are also part of key activities of the Hunger Project in Kissamey. Learners – mostly women – receive basic skills in various aspects of accounting. Learning helps them to better manage their earnings and savings.

In Beterou in the Northern Region – about 455 kilometres from Cotonou – the challenges are even more daunting. Beterou may be one of the poorest localities in Benin, marked by a complete lack of all basic amenities. Dirt roads are treacherous, with many roots of old trees that become obstacles. Moped riders must cross small lakes filled with murky water when they move from one bush settlement to the next. Young girls fill rusty containers with muddy water for cooking and drinking from the same lake others use for washing clothes or themselves.

In Beterou, the Hunger Project offers various low-cost services to the community, including maternal and baby health care, kindergarten, micro-credit, food storage and literacy sessions. There is also a micro-insurance scheme that helps them bury their dead at very low cost. Northern Benin has one of the shortest life expectancies in the nation, and many people die prematurely due to diseases and an extremely harsh and inhospitable environment, made worse by grinding poverty.

Moreover, villagers have access to small loans that help them build their own houses with cement and iron rods. Corrugated iron is used for roofing. Villagers can thus avert the risk of being buried alive by mudslides in times of torrential rains.

A promising experiment is the establishment of cashew nut farms. More than 40 hectares have already been planted, and by 2014, the farmers hope to reap the fruit of their hard labour, given the high demand for this crop in various parts of Benin.

Meanwhile, the work being done by the Hunger Project’s Health & Nutrition Unit in Beterou is highly commendable: For just 2,500 CFA Francs (about five US dollars), pregnant women get comprehensive pre-natal and maternal-care package, including generic drugs and support from birth attendants. One project partner told me: “The Hunger Project has come here to make life easier for us.”