Important for a sustainable diet

The world’s diet is far less balanced than it could be. On more than half of all agricultural land worldwide, a mere six edible crops are growing: wheat, soy, maize, rice, barley and canola. Yet there is a huge variety of edible plants that are rich in vitamins and micronutrients. They could play a major role in reducing malnutrition. 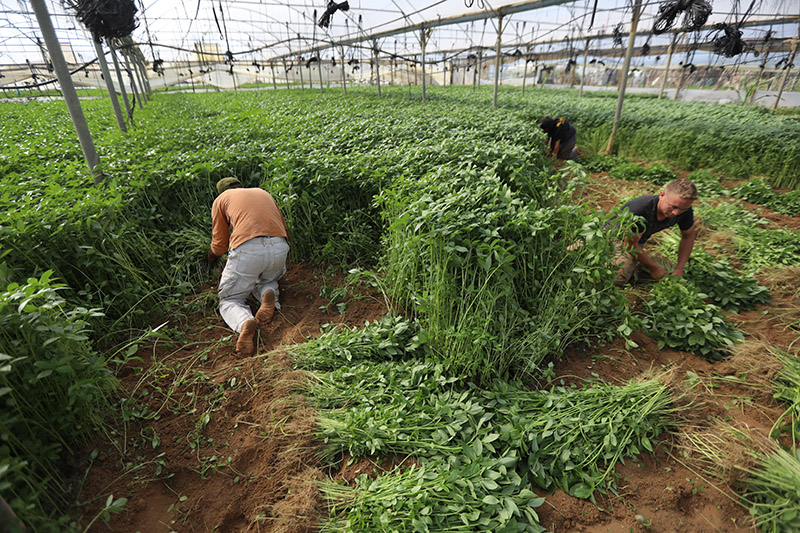 picture-alliance/NurPhoto Jew’s mallow is unknown in many parts of the world but is very popular in the Middle East, here in the Gaza Strip in Palestine.

Apart from the above mentioned six crops only a few more play a role for human consumption: in fact, the world population gets its energy from just 20 edible plants. By contrast, more than 31,000 plants are documented worldwide. They are cultivated for human consumption, animal feed, construction materials, fuel or pharmaceutical, toxin or textile production. More than 5,500 of them are edible.

Edible plants with strange-sounding names such as bitter melon, spiderplant or Jew’s mallow still play an important role in parts of sub-Saharan Africa and Asia (see box). Elsewhere, however, such plants belong to the group of neglected and underutilised species (NUS). They receive little attention from – or are completely ignored by – agricultural researchers, plant breeders and policymakers.

NUS are wild or semi-domesticated species. They are normally not traded commercially. Their variants are thus not used to develop marketable varieties. If plant breeders consider them at all, it is only as a source of genetic traits. There is thus little documented experience about productive cultivation methods, and even less about how the species could be profitably marketed. They do not appear in agricultural production or trade statistics, nor do they figure in regional or global value chains.

NUS are described as “underutilised” because they have considerable, generally untapped nutritional potential. As nutrient-dense food, particularly in regard to important micronutrients, they could significantly help reduce the kind of micronutrient deficiencies that are called “hidden hunger”. Around two billion people worldwide are affected by micronutrient deficiencies. This phenomenon is most widespread among the poor rural communities in developing countries. The most common forms of hidden hunger are deficiencies of iodine, iron and vitamin A, which can seriously affect physical or mental development and cause long-term health problems.

In some regions, however, underutilised species play a very significant role. In the Middle East, for instance, Jew’s mallow (Corchorus olitorius) is the basis of a very popular dish called molokhia. Flavoured with garlic, lemon and coriander, the plant’s earthy spinach-like leaves make a hearty vegetable accompaniment for rice. Properly prepared, the leafy greens not only contain lots of protein (4.5 %) but are also rich in iron and vitamins B6, A and C. The indigenous leafy vegetable is also known in Kenya, where it is cooked in milk with cowpea leaves and goes by the name murenda.

In a research programme funded by Germany’s Federal Ministry of Education and Research – the HORTINLEA programme (Horticultural Innovation and Learning for Improved Nutrition and Livelihood in East Africa) and implemented by Berlin’s Humboldt University in collaboration with the Centre for Rural Development (SLE) – West Kenyan smallholder farmers were asked which indigenous leafy vegetables were the most robust in extreme weather conditions. Compared to other leafy greens, Jew’s mallow was reckoned to be a very resilient plant – and one that grows well even on marginal land. This stress-tolerant plant can withstand weather shocks that are intensifying because of the climate crisis. The plant is resistant to drought thanks to its long taproot. Excessively wet conditions also seem to cause the plant little discomfort.

Even so, Jew’s mallow is grown only on a very small scale by a few smallholders. It is hardly ever grown as a cash crop. Consumers complain that the leaves, when cooked, have a slimy texture like okra, which makes for a thick sticky sauce. That is evidently not to everyone’s taste. However, the problem could be solved by breeding programmes and improved cooking recipes.

But some neglected species have emerged from their shadow existence. Quinoa is a prime example. In health-conscious circles in Europe, demand for the gluten-free protein- and vitamin-rich cereal from the Andes has rocketed since the 1990s. But it also has some downsides when underutilised plant species become “superfoods”. Importing quinoa from Bolivia and Peru requires long-distant transport with a negative impact on our climate.

The “mother grain” of the Incas was long regarded as a “poor man’s food” in the Andean region. It grew particularly well in marginal soils. As a result of the recent hype, more and more land is being used for growing quinoa. Andean smallholder farmers now sell their harvests rather than eat the crop themselves. A growing number of families have thus switched to less nutritious staple foods like pasta and maize.

Nevertheless, they do not make much money from quinoa because exporters rake in the largest profits. Political interventions are needed here to help smallholder farmers take over more functions in the quinoa value chain and thus benefit more from the boom. Anyone buying quinoa in Europe should look out for “fair trade” and “organic” labels. Alternatively, they can switch to locally produced buckwheat, which contains almost as much protein and, being a pseudo cereal, is likewise gluten-free.
A great deal still needs to be done to help nutrient-dense NUS gain acceptance. At the same time poor smallholder farmers deserve support so they can improve their incomes and their own food security. Instead of encouraging further shifts towards a Western diet high in salt, sugar, fat and processed foods, research and agriculture policy should pay more attention to forgotten edible plants. In the long term, that could help reduce the high costs of non-communicable diet-related diseases such as diabetes, obesity, cardio-vascular diseases and certain types of cancer.

Silke Stöber is an agricultural economist and works as a senior scientist at the Centre for Rural Development (SLE) at Humboldt University Berlin. Her research subjects include food systems, agroecology and adaptation to climate change. She has coordinated two sub-projects in the HORTINLEA research programme mentioned in the article.
silke.stoeber@agrar.hu-berlin.de