When table and trough compete

Global demand for meat is steadily rising. In the long run, it can only be met by more intensive livestock farming, which would imply feed crops crowding out crops for human consumption, tougher competition for land and faster climate change. Therefore low-meat diets are indispensable – everywhere.

last contributed to D+C/E+Z in winter 2017/2018 as president of the Heinrich Böll Foundation.

contributed to D+C/E+Z in summer 2015 as head of the Department of International Agriculture ­Policy at the Heinrich Böll Foundation. 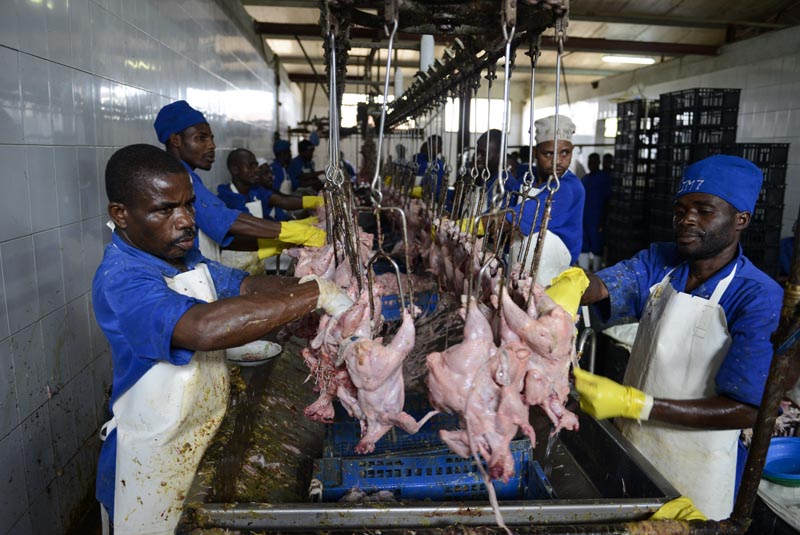 Böthling/Photography The growing global demand for meat can only be met by a sharp increase in industrialised intensive livestock farming. Poultry production in Mozambique.

After decades of increase after increase, meat consumption in the industrialised world is moderately recessive. Global demand, however, keeps rising. This development is driven largely by the BRICS countries – Brazil, Russia, India, China and South Africa. Together, they account for 40 % of the world population. Meat consumption grew by 6.3 % a year from 2003 to 2012 in the BRICS, and is projected to continue to grow by 2.5 % a year from 2013 to 2022.

The increase in meat consumption is closely related to rising incomes. In the BRICS, more meat is being eaten, especially by the new urban middle class. A survey by the UN Food and Agriculture Organization FAO shows that nearly 80 % of the additional meat that will be consumed in China by 2030 is attributable to changes in income levels and consumption patterns. Population growth will only cause 11 % of the increase. Things are similar in India: 68 % of additional meat consumption stems from changes in consumer behaviour, and only five percent from population growth.

Nevertheless, there are marked differences between the two big emerging markets in Asia: India’s average per capita consumption is less than a tenth of China’s. Vegetarianism has deep cultural, religious and social roots in India. A quarter to a third of Indians say they are vegetarians. However, the number of meat-eaters is growing. Since the start of the economic boom in the early 1990s, the new middle class has been adjusting its lifestyle to the western model, which includes eating meat. “Non-veg”, as they say in India, has become a status symbol.

If global demand con­tinues to rise at the present rate, the world’s farmers and agribusinesses will need to step up meat production from the current 300 million tonnes a year to 470 million tonnes by 2050. That increase is possible only with a fundamental change in production methods. The technology- and capital-intensive methods that dominate livestock farming in the global north are spreading into the lucrative markets of the global south. This means that large-scale operations are growing fast while smallholder farmers are being squeezed out of the market.

As livestock farming is being industrialised, feeding regimes are changing. Theoretically, human beings and ruminants do not compete for food – grain is for bread, grass and clover for cows. But to maximise output, intensive livestock farmers make intensive use of high-protein concentrated feeds. For example, more than 40 % of the global wheat, rye, oats and maize harvest goes directly into animal troughs. The total amount is nearly 800 million tonnes. Grains, moreover, are supplemented by 250 million tonnes of oil meal, largely from soy beans. The more animals are fed grains and oilseeds, the greater the competition between feed crops and food crops becomes.

Soy is the key source of protein in animal fodder today. According to a WWF study, global soy production has increased tenfold in the last 50 years, surging from 27 to 269 million tonnes. Soy is now being cultivated on more than 100 million hectares of land, which is a larger area than France, Germany, Belgium and the Netherlands combined. The biggest soy producers are the United States, Argentina and Brazil. In 2012 alone, the hectarage used to grow soya increased by an area the size of Mecklenburg-Western Pomerania (a German land) in Brazil and by an area the size of Saxony-Anhalt (another German land) in Argentina.


Twice as much soy

It is far from obvious how all the livestock that would be needed to raise meat production by nearly 200 million tonnes a year might be fed. According to the FAO, soy production alone would almost have to rise to 515 million tonnes, which would mean having to boost yields per hectare or increase the area of arable land used – or both.

Today, three-quarters of global soy production is shipped to China. The EU imports around 35 million tonnes a year, grown on nearly 16 million hectares of land. That is about the same as the total area of arable land in Germany. Industrial livestock farming therefore does not free up land. On the contrary, it depends on using ever more land. From a nutritional viewpoint, it would make far more sense to eat crops straight from the field rather than use them to feed animals that yield meat. Turning grain and oilseed into meat results in a massive calorie loss. According to the International Assessment of Agricultural Knowledge, Science and Technology for Development (IAASTD), the ratio of the calorific values of feed and the meat it produces are at best 2:1 for poultry, 3:1 for pigs and 7:1 for cattle. A high-meat diet thus ties up a lot of land.

From a developmental perspective, the increasing global appetite for meat is worrying because it intensifies the competition between table and trough. The growing demand for feed is one of the factors driving up prices in agricultural markets. The first 13 years of the present millennium saw a relentless rise in those prices; since 2014, the FAO Food Price Index shows a moderate downturn.

For all those who must spend most of their income on food, the effects are dramatic. Rising food prices mean hunger and poverty. Many of the hundreds of millions who go hungry today are smallholder farmers and agricultural workers in the global south. Upturns in world market prices hardly raise their incomes, however, because land, seed and fertiliser costs are rising too, pushing up production costs.

Moreover, humans and animals compete for not just agricultural products but also for arable land. The pressure on small-scale farmers is growing because demand for land is steadily increasing. It largely results from the mounting demand for meat that agricultural land prices are rising. Land has become a very attractive investment, so ever more rural people are at risk of displacement and dispossession (see Michael Windfuhr in D+C/E+Z 2015/05, p. 18 ff.). The land rights of small-scale farmers in countries with fragile democracies or under authori­tarian rule are particularly at risk. Land deals are generally opaque, so it is difficult for those affected – indigenous groups, small farmers, women, nomads – to get information and fight for their rights.

The Land Matrix Global Observatory believes that more than 1,000 land deals have been concluded since the year 2000, resulting in the sale of a total of 39 million hectares. That is an area bigger than Germany. Negotiations are currently being held on around 200 more projects with an aggregate volume of 16 million hectares. Other non-governmental organisations such as GRAIN or Oxfam report purchase of long-term leasing deals on a much larger scale. According to Oxfam, around 230 million hectares of arable land – an area the size of Western Europe – changed hands in developing countries between 2001 and 2010. Estimates of how much was paid in total range from $ 50 billion to $ 100 billion. The wide gap in the figures shows how difficult it is to establish facts – and how important it is to make land deals more transparent.

More than 80 % of all farms worldwide are smaller than two hectares. They use a little over 10 % of the world’s agricultural land and provide an income for more than 500 million farming families. Only two percent of farms have an area larger than 20 hectares, but they account for nearly 70 % of global agricultural land. Where small farmers continue to be deprived of the most important basis for agricultural production – land – and alternative sources of income are not available to rural communities, people migrate to cities, where many suffer hunger and poverty.

Apart from inflating food and land prices, industrial livestock farming has other negative impacts. It contributes to climate change, for instance, because it generates greenhouse-gas emissions, including methane produced by the animals, and massive amounts of carbon dioxide that are released when land-use is switched to feed-crop cultivation. Soil is the second-largest carbon storage facility on earth; it stores more carbon than all the world’s forests together. But when meadows and steppe are turned into arable land, part of the carbon dioxide is released into the atmosphere. Developing countries are affected by climate change in particular, and their options for adapting are limited.

In the book “The global chicken”, Francisco Marí and Rudolf Buntzel-Cano highlight how industrial livestock farming impacts even more directly on lives in the global south. The authors analyse the effects of European consumer behaviour on various African markets. Europeans like their chicken filleted, and they are prepared to pay a fairly high price for choice cuts. For the rest of the bird, there is virtually no market anymore in Europe, so it is frozen and exported to African countries like Cameroon and Ghana.

Because the expensive cuts alone make poultry farming in Europe profitable, the other parts of the chicken – despite shipping and refrigeration costs – are sold at such low prices that African producers cannot compete and are squeezed out of the market. Since the initial investment is low, poultry farming is a business that particularly attracts women in developing countries. The destruction of local markets robs them of a measure of financial independence and opportunities for supporting their family.

The question is often raised whether the earth will be able to feed 10 billion people. The answer is yes, but only with sustainable agriculture and a radi­cal change of diet. Even if it is unfair, not all of the people in the world will be able to eat as much meat as those in the advanced economies are used to eating today.

Barbara Unmüßig is president of the Heinrich Böll Foundation.
prosinger@boell.de