In Mozambique, decentralisation has been the subject of the most intense political debates and conflicts for more than two decades. At first sight, the government and opposition parties are essentially fighting over how much power the provinces should be given. But in fact the opposition wants political responsibility and power for the administrative units where it has won the majority of votes. So far, government has managed to avoid that. 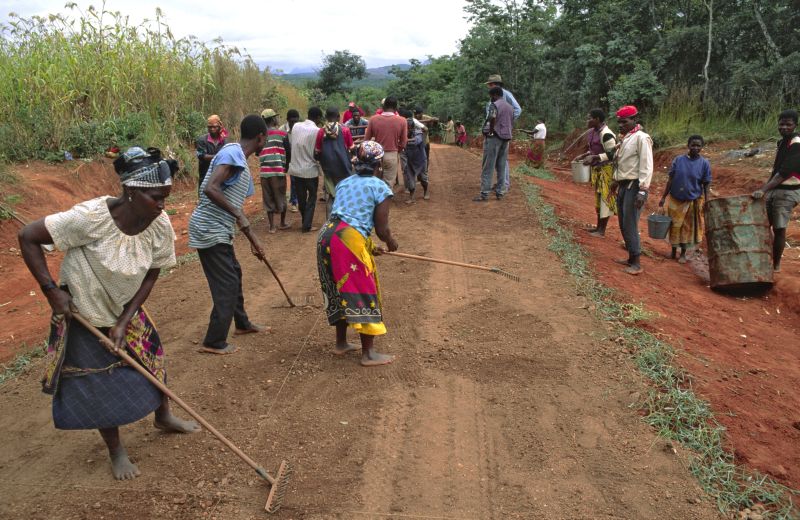 Neil Cooper/Lineair A rare sight in Mozambique: members of the Frelimo and Renamo parties work together to construct a road.

After the parliamentary elections of 2014, the apparently mere administrative problem of decentralisation became enormously politically contentious. That’s because the most important opposition party, Renamo, demanded that itself – not the president, like in the past – should appoint the governors in those central Mozambican provinces where it had won a majority of votes. Government refused that, and that sparked a “mini-war” between the armed forces of Renamo and the security forces of the “eternal” government of Frelimo that has been ruling the country since 1975. Mozambique was on the way to a failed state (see Kaufmann/Borowczak in D+C/E+Z e-Paper 2017/6, p. 20).

The conflict over decentralisation even led to murder. On 3 March 2015, a hit squad shot and killed Gilles Cistac, a constitutional expert and university professor, on the streets of Maputo. He had received death threats in the weeks before. On Mozambican television and in newspaper articles, Cistac argued that the constitution allowed provincial governors to be elected by the people rather than appointed by the president, as had been the case to date. He also believed that the provinces were entitled to total self-governance. Though there is no evidence of a direct connection between Cistac’s murder and his expert opinion on the constitution, many viewed the crime as evidence that advocating for far-reaching decentralisation can be life-threatening.

No financial resources of their own

The history of decentralisation in independent Mozambique begins in the 1990s with the first steps towards deconcentration as a means of transferring power to the provinces (see background information). The provinces now elaborate and manage their own budgets (ongoing expenditures and investments). They receive the necessary funding from the Ministry of Finance. There is comparatively little oversight by the Ministry of Finance or other relevant ministries. The national parliament rubber-stamps the provincial budgets without discussion or a special vote.

Already in 2003, a special law (LOLE) was passed to further expand and systematise the administrative and decision-making powers of the provinces as well as the districts, without actually altering their fundamental subordination to the central government. It is worth mentioning that the justice system has undergone a certain deconcentration of its own in the last 25 years.

Much more contentious than deconcentration has been the process of devolution, or the transfer of power to lower levels. As early as 1994, parliament, acting on a suggestion by the Frelimo government, passed a law that envisaged local self-governance for all cities (cidades), small towns (vilas) and rural communities (localidades). The goal was for the entire territory and the entire population to be self-governed at the local level. But power-conscious forces within Frelimo halted its implementation. They were afraid that voters in municipal elections would allow Renamo to dominate the local governments in regions of its strongholds.

Instead the government drafted and passed new laws in 1996/97 that envisaged a gradual roll-out of local self-governance. In 1998, the first municipal elections (for mayors and local assemblies) took place in 33 cities and small towns, which were home to almost 20 % of the people. Nowadays, 53 municipalities, or about a quarter of all citizens, have the privilege of local self-governance. Nevertheless, about 75 % of all Mozambicans are still governed by provincial and district administrations that are ultimately controlled by Maputo.

A lack of success

The introduction of local self-governance has so far had a rather limited impact on the quality of life of people in the affected municipalities. Their financial resources are all too limited, there is a serious lack of qualified personnel, and the local elected officials often simply carry on the practices of corruption, unjust enrichment and nepotism that are common at the national level. Donor countries are aware of these problems and offer support in the form of advice or funding, but these measures have been largely ineffective given the complexity of the situation.

Local self-governance has also failed to reduce the overwhelming dominance of Frelimo. In municipal elections, the opposition parties of Renamo and MDM have never won majorities in more than four or five cities and small towns, meaning that there are very few places where they have been able to appoint the mayor or hold a majority of seats in the local assembly. In the current legislative period (2013-18), MDM won the mayorship in four of the 53 municipalities, but Renamo did not win a single office because it chose to boycott the municipal elections. When Renamo mayors were voted out of office, election fraud was a frequent factor. The city of Beira is worth mentioning in this context. For three legislative periods in a row, MDM has won a majority of seats on the city council and retained its mayor, Daviz Simango.

The largest change that the entire decentralisation process has brought about thus far is the emergence of new local political elites formed by all three relevant parties. These people have risen to the top despite their limited authority, financial resources and qualifications. Such a process is never without conflict, not only between competing parties, but also within them. The most spectacular example was the case of the successful mayor of Maputo, Eneas Comiche, during the 2003-08 legislative period. In 2008, his party, Frelimo, refused to allow him to run for re-election, which he almost certainly would have won, because he refused to engage in corrupt practices relating to the allocation of building land to party members. Additionally, he was in favour of participatory budgeting.

Even though it is the strongest opposition party with its own small army, Renamo has so far not succeeded in capturing significant positions of power at the local level. They have never been able to retain a mayorship beyond one legislative period. And those mayors always oscillate between being weak and unremarkable.

Nevertheless, the Renamo leadership knows that it would finally achieve a meaningful political victory if it were able to place its own people in the office of provincial governor in its six claimed central Mozambican provinces. It would be able to do so if a new legislation were to allow people to vote for governor, but especially if a new law were to award complete political and administrative autonomy to the provinces.

Renamo continues to argue that more extensive decentralisation, particularly at the provincial level, would give it the opportunity to pursue better policies in the interest of all Mozambicans. But these arguments should be taken with a grain of salt. After all, Renamo is also a party mired in the logic of unjust enrichment, clientelism and rent-seeking. Like Frelimo has done to date, Renamo would probably use these positions to transfer a little bit of power to lower levels, but above all to shore up new regional Renamo elites. Most likely corruption, unjust enrichment and mismanagement would be the rule. Renamo governors who tried to escape this logic would have to expect internal sanctions.

Ultimately, political control of six provinces is just one, albeit important, stepping stone for Renamo. But with the “mini-war” that it instigated and that both sides fought stubbornly, Renamo, like Frelimo, was trying to access Mozambique’s many sources of rent. These include not only natural resources, but also state monopolies, public contracts and access to extensive donor funding. Control of a part of the state apparatus also opens up numerous opportunities for well-paid positions in state institutions, state-run companies or infrastructure projects. None of this has anything to do with democratic decentralisation, not to mention rational governance.


Friedrich Kaufmann is the head of the German Chamber Network office in Maputo in the context of the BMZ’s ExperTs CIM programme. The views expressed in this article are his own personal opinions.
friedrich.kaufmann@gmx.net

Winfried Borowczak is an independent consultant, specialised in decentralisation.
winborow@aol.com