Land disputes have been causing tensions in Bolivia for decades. In some low-land areas, such as the Chiquitanía region, smallholder farmers, major landlords and indigenous people disagree about who should have access to land and who should wield political influence. Alcides Vadillo of the Fundación Tierra, a non-governmental organisation, facilitates dialogue to make a difference.

last contributed to D+C/E+Z in summer 2013 as the regional director of the non-governmental Fundación Tierra in Santa Cruz, Bolivia. 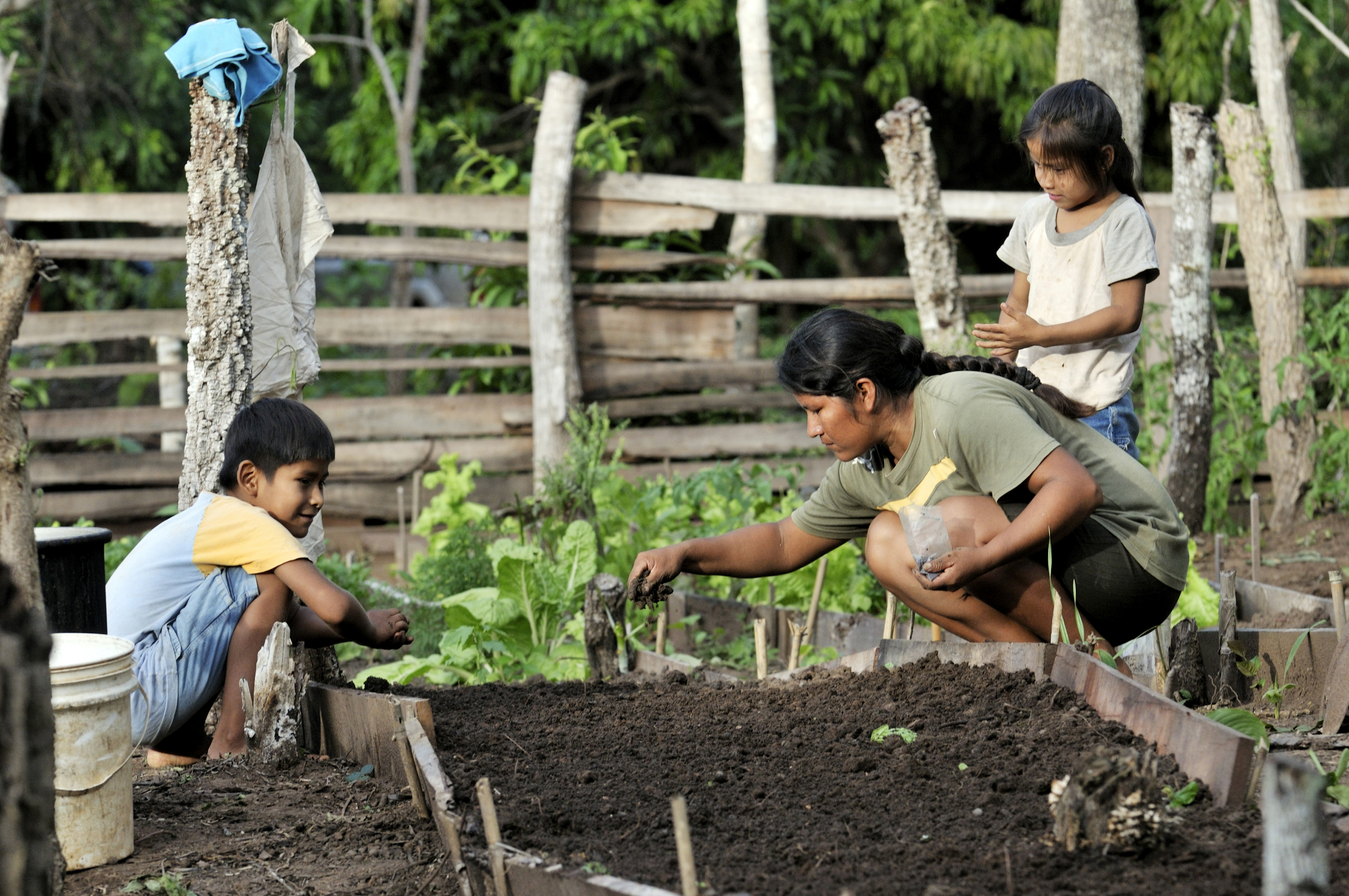 Florian Kopp/imagebroker/Lineair “In the Chiquitanía region, smallholder farmers, major landlords and indigenous people disagree about who should have access to land”: A farmer’s family sowing vegetable seeds.

The Fundación Tierra started to deal with land issues in San Ignacio de Velasco, a munici­pality on the Brazilian border, years ago. What do you want to achieve?
The Fundación Tierra has always supported disadvantaged population groups – smallholder farmers, indigenous people and migrants from the Andes. We campaign for a more equitable distribution of land, and we want to boost political participation by rural and marginalised groups who have a hard time confronting the landlords.

Bolivia has repeatedly passed legislation on land reform. What are the major obstacles?
Well, there was a strong sense of polarisation after Evo Morales was elected president of Bolivia in 2006. Conflicts erupted between the rich and the poor, between old attitudes and new aspirations, between the high lands and the low lands, between the progressive, developed part of the country and those parts that are lagging behind. We were close to civil war, and the land issue served to compound the situation because it affects economic, ethnic and political interests. Accordingly, it mobilises people and pits them against one another.

What happened in the Chiquitanía region?
It was frightening to see some groups – farmers’ organisations, for instance – take up arms and occupy land by violent means. At the same time, landlords hounded government officers away and defended their real-estate with almost military means. The situation was quite dangerous and we became aware of democracy itself being at risk.

Unlike other organisations, your Fundación adapted to the new situation. What did you do?
We figured out that we had to promote peace. We could no longer take sides and be an actor in the conflict. We felt that we had to promote dialogue to prevent violence. The Foundation’s democratic roots are deep. At the time, moreover, people from Germany’s Civil Peace Service had begun to advise our regional office, showing us how to tackle the problem by peaceful means with an emphasis on dialogue. We saw that dialogue does not necessari­ly slow down debate and thwart social movements.

To promote dialogue, you could not stay the advocates of disadvantaged groups. You had to talk to all relevant parties. So did you change the fundamental outlook of your organisation?
The change was really more tactical than substantial. We are still in favour of land reform; we always wanted land to be distributed more equitably. The point is that we don’t want people to deal with this challenge by violent means. Our approach is a democratic one.

What exactly is dialogue in your eyes?
We consider dialogue a process. It differs from negotiations. In negotiations, you take sides and raise demands. Dialogue, however, is about getting people to sit down together and meet as persons, not as representatives of specific groups or ideas. The idea is to weaken prejudices and soften ideologies. Let’s not argue about the big issues; let’s assess what can be feasible. That is the way to move ahead. And that is what is currently happening in San Ignacio de Velasco. The issue at stake, however, is not land, but the drafting of the Carta Orgánica Municipal, the municipal charter.

Why is the focus not on land?
At this point, it is impossible to start a meaningful dialogue on land issues. The topic is too conflictprone for people to assemble around one table and discuss justice, equality and redistribution. There is a lot of hostility between those who need land and those who have land. Moreover, in this specific context, it is a zero-sum game: in order to give someone land, you have to take it away from someone else, so it is very hard to reach an agreement.

Drafting a municipal charter is local-level politics. Why are you involved in this issue today?
Land issues closely relate to political participation. The distribution of land is controversial because entire groups of people are marginalised in political, economic and social terms. Drafting the Carta Orgánica Municipal is about defining the basic rules of municipal life, including the set-up of the administration as well as procedures for oversight and participation. We believe this is very important. Moreover, experience in this matter will help us to tackle the land issue. The parties involved are almost the same.

How did you start systematic dialogue on the municipal charter?
Well, when the charter needed to be drafted, various interest groups demanded to be involved and some asked us for support. We proposed starting a formal dialogue and they agreed. So we began discussions with all relevant groups, including the elected Municipal Council. After many long discussions, the Council finally established a commission on the matter, and for the first time in the history of San Ignacio de Velasco, the smallholders and the in­digenous people were represented and got a vote.

So that was a first success?
Yes, it was, but it was not the last one. We believe that dialogue fosters a more democratic culture, in which it is no longer obvious that men decide what women should do or that landlords command the fate of entire municipalities. We believe that dialogue even has an impact on people’s private lives, teaching them how to deal with diversity and opposing views, and how to reconcile groups that used to resent one another.

Have you noticed mindsets change that way in San Ignacio de Velasco?
Even today, after two years of work, attitudes are different. I’m not saying there are no conflicts anymore, but the way people approach conflict has changed. We want dialogue to be a good experience, so we joined hands with the Asociación de los Comités de Vigilancia del Departamento de Santa Cruz (the association of vigilance committees of the Santa Cruz Department) and GIZ’s Civil Peace Service to make it happen.

What was the greatest initial challenge?
We’ve been giving advice to indigenous groups in San Ignacio de Velasco since 2003. Accordingly, the landlords and the municipal government – including the Council – struggled to accept us in the role of a facilitator of dialogue. Their opposition showed us, however, that it is important to cooperate not only with the marginalised people, but to reach out to those who are marginalising them as well. At the same time, the indigenous people suddenly saw us talking to government agencies and landlords, so they became suspicious too.

In view of massively diverging interests, it must be hard to get all parties to sit down together and talk. What was your approach?
We learned that it is essential to take a clear stand and to speak in one voice with one message to all relevant parties. Our action must always be transparent. Initially, the landlords, who control economic and political power in San Ignacio de Velasco, neither accepted indigenous communities nor the movement of the landless (Movimiento Sin Tierra) as partners for dialogue. They felt threatened. It all took rather long, but in the end the Council decided to establish the commission, and that decision is now generally accepted. That does not mean that all problems are solved. National politics caused difficulties too.

In what sense? Isn’t this a local affair?
The interests and machinations that mark national politics always have a bearing on the local level. The mayor was forced to step down, council membership changed, and all this manoeuvring slowed down work on the Carta Orgánica Municipal. It did not thwart the progress achieved at the individual level – the new mind set, the culture of peace –, but it did slow down tangible results. And we want to prove that dialogue serves to build something, for instance a municipal charter that everybody can identify with to a reasonable extent.

Has dialogue made San Ignacio de Velasco more peaceful?
When we started the dialogue, tensions were running high, even between smallholder farmers and indigenous people. The indigenous people were not only fighting the landlords, they were also fighting the farmers who had moved to the area from the Andean mountains. Thanks to dialogue, these parties have become closer and are now even planning joint action. That did not happen previously. And the attitude of the landlords has become less violent too. In 2008 and 2009, some of them were setting up paramilitary troops that were supposed to defend their real estate. In dialogue, however, all parties got to know and to appreciate one another. Today, they accept one another.

What about the Fundación Tierra? What do the people think of you?
In 2008, some groups wanted to chase us from this region. They blocked our office and even threatened to burn it down. Today, however, we are one of the most respected organisations in San Ignacio de Velasco. We are accepted by everyone, including the local government and the national administration, and I am convinced that everyone acknowledges that our role is a constructive one.

Alcides Vadillo is a Bolivian lawyer who specialises in land issues and the rights of indigenous people. He is the regional director of the non-governmental Fundación Tierra in Santa Cruz, Bolivia.
a.vadillo@ftierra.org