India’s population is still growing, but by ­mid-century, those of working age will start to be outnumbered by people over 60 and children under 15. Government and civil so­ciety should plan now how to improve social services for the elderly population.

contribute to D+C/E+Z as a research scholar at the Tata Institute of Social Sciences in Mumbai.

contributed to D+C/E+Z in spring 2020 as a professor at the Tata Institute of Social Sciences’ campus in Hyderabad. 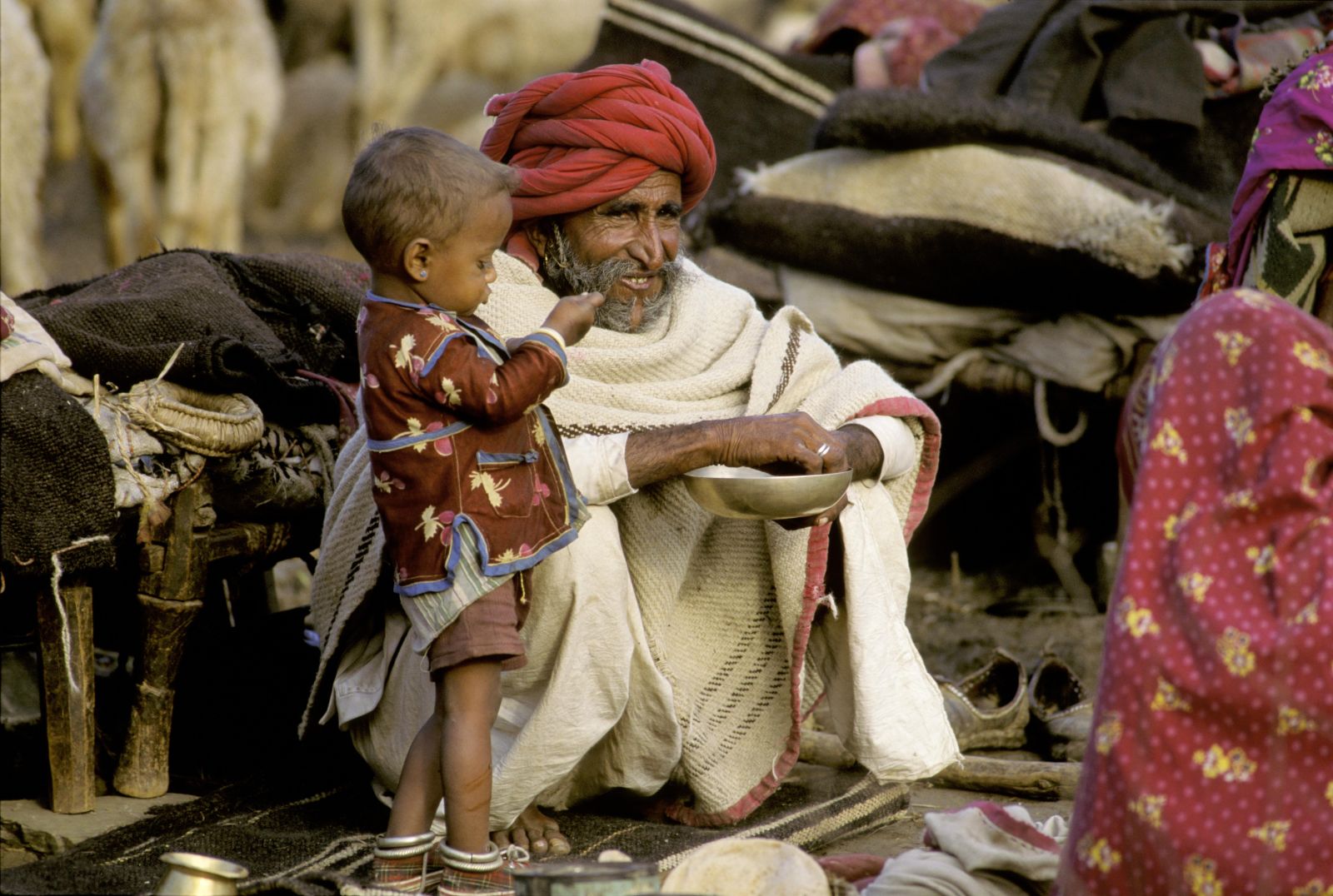 Birgit Koch/Lineair India currently has comparatively few very young and very old persons: an infant and an old man from a rural community in Rajasthan

India’s population growth has declined to 1.1 % per year. Given that the country has 1.36 billion people, that will still amount to an additional 150 million persons in absolute numbers by the end of this decade. At the same time, society is ageing – and faster than those of developed countries. The number of people over age 60 as a share of the total Indian population is rising each year.

The proportion of elderly will increase from eight percent in 2015 to 19 % in 2050, according to a country report published by the UN Population Fund (UNFPA, 2017). The demographic trends raise questions about how India will support its elderly beginning mid-century, when non-working age people start to outnumber those of working age.

The reasons for the greying of the population are the same in India as elsewhere. People are living longer as a result of better health care, improved nutrition and greater awareness of hygiene. In other words, India’s death rates – deaths per 1000 population in any given year – have been falling steadily for decades.

At the same time, families are having fewer children as their education and incomes rise. Both the fertility rate (the average number of children per woman over a lifetime) and the birth rate (a population-wide measure for a given year) have been falling steadily for years. On the other hand, mortality rates for children under five have fallen sharply as a result of control of infectious and parasitic diseases, increased immunisation and public-health improvements. That is why today’s children are more likely to survive than those of the past, thereby blunting the impact of the lower birth rate.

These trends have big implications for India’s future development. Thirty years from now, when today’s gradually shrinking cohort of children is of working age, many millions of today’s workers will have retired. That future combination – more retirees and fewer work force entrants to replace them – could be a challenge.

The data show that in 1971 the working-age population supported a comparatively large cohort of babies and children under 15 plus a relatively small elderly population. The population bulge that year was at the low end of the age pyramid, at ages 0-14.

Forty years later, in 2011, India had received a bonus: the “population bulge” babies and children of 1971 were of working age. People between 15 and 60 years old were the predominant population group – a happy circumstance from an economic perspective.

But then the demographers peered into the future by projecting out current trends, and started to see a picture, which is different from the present one. The age distribution pyramid for 2031, only 11 years from now, shows that the big working-age cohort seen in 2011 will start to retire. By 2031, the base of the demographic pyramid – the age brackets where the most people are found – will still be solidly in working age territory, but the entire pyramid will have shifted upwards along the age axis compared to 2011. In other words, by 2031 the age brackets over 60 will have far more people in them than they did in 2011.

Looking a further 20 years ahead, to 2051, the demographers found these trends will start to have a real impact. In 2051 the biggest bulge will be in the 50-55 age group – still in working-age territory, but just barely. Moreover, the age groups above 55 will have many more people than they did in 2031.

At the same time, the ranks of children under 15 will be smaller in 2051 than in 2031. That suggests the work force from 2051 onward will not receive enough new entrants to make up for all the departures of ­retirees. The non-working age population will start to outnumber the working age population, placing increasingly heavy burdens on workers.

These population trends raise questions of where the financial, social and psychological support will come from for India’s ageing population. While the family is still the primary support for old people in India’s culture, this is changing under the pressures of urbanisation and globalisation.

Aside from financial dependence, elderly people face a range of problems including isolation, neglect, illness and disability. Shifts in societal attitudes that now place a greater emphasis on individual fulfilment can lead older people to feel less valued. Reduced decision-making power and an excess of free time are prone to compounding psychological problems.

Before they become acute, these problems should be addressed by governments, non-government organisations and academics. All stakeholders associated with ageing issues need to come together and play their respective role. India will need a multi-pronged approach based on the different needs of different sub-groups of elderly people. Ageing among the poor, among women and among rural residents should receive particular attention.

A concerted effort to improve the quality of life in old age should begin with the demographic facts. India’s states have widely varying concentrations of old people. In 2011 the proportion of people over 60 was highest in the State of Kerala (12.3 %) and lowest in the state of Assam (6.5 %).

Levels of poverty and illiteracy also vary dramatically within the elderly population. Moreover, rural areas tend to have higher concentrations of elderly than do cities, which attract younger workers. There is a gender aspect too: as women live longer than men on average, the over-60 population is more likely to be female.

All these factors – geography, urbanisation, gender, income and education – affect the degree and type of support that elderly people will need in future. So will the more intangible element of changing norms and values, which will influence how much support older people will receive from their families, and therefore how much supplemental help they will need from government and other organisations.

India has started to address the needs of the elderly. The Integrated Programme for Older Persons in 1992, revised in 2008, provides food and shelter, medical care and opportunities for entertainment. The National Policy on Older Persons in 1999 offers food and shelter, financial aid, health care and protection against abuse. The Maintenance and Welfare of Parents and Senior Citizens Act of 2007 supports abandoned seniors by providing old age homes, medical facilities and property protections.

Each of these programmes aims to meet the needs of specific segments of the elderly population. As India’s ageing gathers pace, many more such programmes will be needed.

S. S. Sripriya is a research scholar at the Tata Institute of Social Sciences in Mumbai.

S. Siva Raju is a professor at the Tata Institute of Social Sciences’ campus in Hyderabad.
https://tiss.edu/view/9/employee/s-sivaraju/