Surrogate motherhood is illegal in Germany. Therefore, some couples, who cannot conceive, but want to have children, turn to surrogacy abroad – in Ukraine, Kenya or California, for example. Anika König is a social anthropologist who does research on these issues. In her eyes, illegal surrogacy means that surrogate mothers have no rights.

contributed to D+C/E+Z in summer 2017 as a social anthropologist at the Lübeck University’s Institute for the History of Medicine and Science Studies. 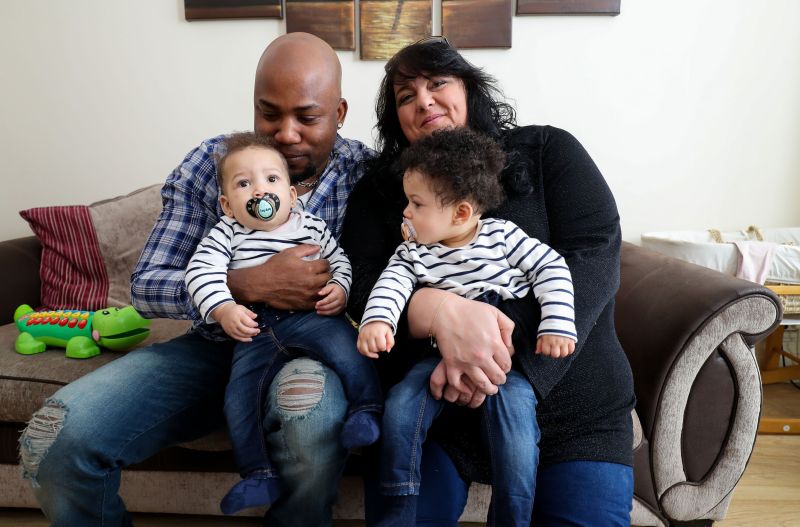 Andrew Matthews/picture-alliance/dpa A British couple with two daughters who were born of surrogate mothers.

Why do couples turn to surrogacy?
I can only speak about Germany and Switzerland, where I have conducted interviews. The people concerned cannot have babies. The reasons are either medical – a history of cancer, for example – or biological, if they are homosexual. The couples consider the situation thoroughly. Media reports, according to which women do not want to interrupt their careers or spare their own bodies the strain of pregnancy are incorrect, at least in Germany and Switzerland. It takes considerable efforts to find and commission a surrogate mother.

But isn’t doing so always abuse or exploitation?
I don’t agree with such generalisations. Yes, when women become surrogate mothers because they desperately need money, the assignment is likely to be abusive. But if all people involved act with mutual consent and in a fair manner, I do not see an ethical problem.

What motivates women to become surrogate mothers?
There is variety of reasons. In California, where surrogacy is legal, I have met deeply religious women who said they wanted to help others to have a family, because that is what matters most in life according to their faith. Other surrogate mothers know how depressed people are because they cannot conceive, for example if it affects a close friend. They too want to help. Some women, moreover, like being pregnant, but do not want another child of their own. Yet other women consider surrogacy an opportunity to earn money whilst taking care of their own children at home.

How much must one pay for a surrogate mother in California?
At least $ 100,000 and more likely $ 150,000. The surrogate mother will earn about 20 % of that sum. Her agency, insurance companies and lawyers make money too. Health services, moreover, are very expensive in the USA.

So only prosperous people can afford a surrogate mother.
Yes, but that need not be so. In Israel, for example, surrogacy is legal, and under certain conditions the government will pay. Applications for funding are complicated and time-consuming. In Ukraine, surrogate mothers are available at much lower costs than in California. And one of my interviewees recently told me she had been offered the services of an Indian woman in Kenya. Indian law has been changed, so German couples cannot commission a surrogacy there anymore. A ban, however, does not end surrogacy. Desperate couples will find help somewhere else.

Are surrogate mothers’ rights better protected when things are legal?
Yes, illegality implies a lack of rights, and that is why Indian surrogate mothers opposed the reform. Their perspective matters too. Some earn more money with a pregnancy than in a decade of working in a garment factory. Some appreciate living in a hostel with other pregnant surrogate mothers, because – for the first time ever – they must not work hard. They daily get good food and have lots of leisure. I do not approve of huge social disparities, but this is a local reality.

What about the children? Don’t they suffer identity problems?
No, not necessarily. It helps to be forthright, as long-term studies have shown. Anonymity causes problems, but the more transpa­rent things are for all people involved, the more normal and self-explaining they are – especially for the children. That is what researchers found out in Britain, where  non-commercial surrogacy is legal. Staying in touch, by the way, matters a lot to the surrogate mothers too. They find it hurtful  when the social parents, who paid them a lot of attention while they were pregnant, later go silent. In this context too, illegality is harmful.

Anika König is a social anthropologist at the Lübeck University’s Institute for the History of Medicine and Science Studies.
koenig@imgwf.uni-luebeck.de

Link
König, A., 2017: Embryos on the move: Transnational networks of surrogacy.
http://www.medizinethnologie.net/embryos-on-the-move/