In South Africa, many children grow up without their fathers. When teenage girls get pregnant, they are often abandoned. This is only one symptom of a distorted idea of manhood that has taken root. For things to improve, it would help if men assumed active roles in parenting.

last contributed to D+C/E+Z in autumn of 2019 as a creative writer and social scientist. 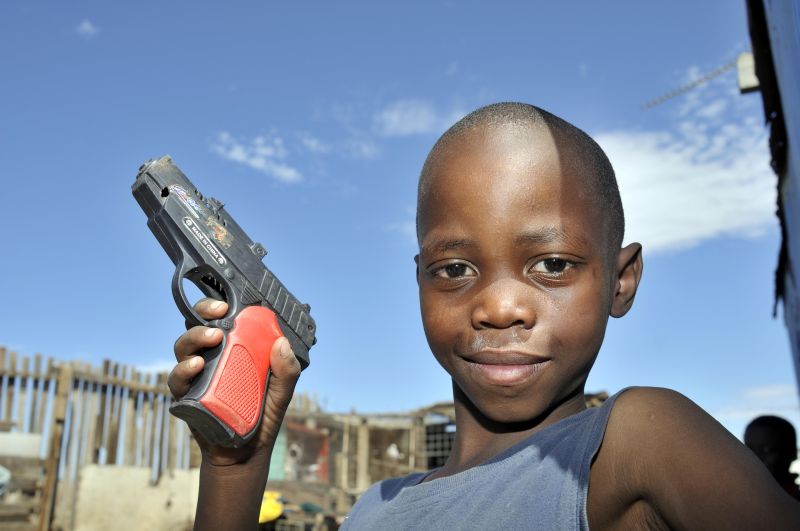 Florian Kopp/Imagebroker/Lineair Ideas of manhood tend to be distorted.

My mother was 16 going on 17 years when she had me. My biological father must have been about 23 years old or older. He was never my daddy by action. I do not have a relationship with him; I do not even know his birthday.

It was tough to grow up without my father. My mother lacked the comfort of a happy relationship and the support of a breadwinner. As a little boy, I could not do much to comfort her, but I did my best. Moreover, I did not have my biological father as a role model. I could not observe and copy how my father dealt with the challenges of life. In retrospect, I know that it would have been helpful to have him as a male role model to turn to and confide in. I have found my own direction in life, but I know that things were easier for my peers who grew up with their fathers.

I was born in 1984, when it was more of a taboo to have a child out of wedlock than it is today. The number of single mothers is obviously increasing. It does not seem to be a very big issue anymore. At the same time, it is safe to say that, though unmarried mothers are not ostracised anymore, their situation does not get general approval either.

Traditional Xhosa culture, for example, promotes abstinence among young girls. If however, a girl does become pregnant, our ethnic group expects the boy who fathered the child to pay a hefty fine. The Xhosa saying is: “Kufuneka uhlawule ngokuwisa ibele lalomntwana.” It literally means: “You need to pay for letting the breast of this child fall.”

It is a problem, however, that not all youngsters who get girls pregnant are able to pay the fine. Before Xhosa ways were interrupted by colonisation and the introduction of money, the fine was paid in cows. But now, money is mostly involved, and high unemployment compounds the problems. Those who cannot pay are shamed, and their relationship with the expecting mother ends at that point.

Marriage would be an option, but it also involves money. Grooms must pay a bride price called “lobola”. Those who cannot afford the fine or lobola, are not allowed to see the children, and they are not acknowledged as fathers, so their children’s fate is to grow up fatherless. The Xhosa tradition has become dysfunctional in contemporary society, which shows how colonisation has disrupted African lives.

There are other reasons why single parenting has become quite common in South Africa. Labour migration is one. Men historically left their villages to work in mines or urban-based industries, so mothers were left alone. This practice was brutally enforced during apartheid, when black families had to live in the so-called homelands, which were demarcated for black people and deliberately left undeveloped. These areas are still poor today.

Today, young people grow up in a confusing world. On the one hand, sexual abstinence is promoted, at least for girls, but on the other hand, young people are curious about sex and its possibilities, which are celebrated in popular culture. What is the right time to become intimate with a partner? What does one do? And where and when does one find the right kind of privacy? Young people are pretty much left to themselves to find out, and all too often things go wrong.

Contraception is a great challenge. In the age of HIV/AIDS, it is obvious that condoms are an important means of protection, not only to prevent pregnancies. However, outdated ideas of sex only being “real” without a condom still exist. One young man, for instance, told me that he had fathered a child with his girlfriend. He said that they had got “cosy” together and it would have spoiled the situation to go out and get contraceptives.

The sad truth is that young men and women feel insecure, but then experiment with their bodies when the opportunity arises. Shame prevents many from providing condoms beforehand, and doing so would imply that they consciously plan to have sex, which goes against the norms girls are taught. Boys, on the other hand, fall for a macho ideology according to which sex with a condom is not really sex at all. Youngsters of either sex would benefit from more enlightened education.

Data from many countries show that teenage pregnancies are less common where sex education neither emphasises abstinence nor demonises sexual activity. The risks of unwanted pregnancies and sexually transmitted diseases are greatly reduced when contraceptives are promoted, when the pleasures of sex are an accepted fact of life and a sense of mutual responsibility is instilled in people early on. Moreover, sexualised violence often goes along with unreflected macho attitudes. Competent education can reduce the incidence of rape too.

Some people want to enforce traditional norms rigidly. Doing so, however, is next to impossible in the urban settings of the modern world which allows for much individual freedom. People are no longer socially controlled by their village community all day, and in many ways, that is a blessing.

Male teenagers often have distorted ideas of what it means to be a man. The cliché is that being male means to be dominant, and that a strong man simply takes what he wants. To some extent, they believe that is what Africa’s traditional chiefs did in the past. In reality, things were more complicated. Chiefs were celebrated as strong men, but the point was not that all their whims would be satisfied, but that they had to assume responsibility for managing their community well, ensuring livelihoods and settling disputes.
Colonial oppression and organised crime have fostered a culture of unhealthy violence. It is a matter of awareness raising to instil a different idea of manhood. Some non-governmental organisations are doing good work in this respect. One example is the Sonke Gender Network (see interview with Dean Peacock in D+C/E+Z 2014/04, p. 161 ff.).

The good news from South Africa is that the situation is not hopeless for all young fathers. Some manage to be at least part-time fathers, even though they have not married the mothers of their children.

Siviwe Njamela was fourteen when he realised that, although it had seemed normal to him up to then, it was a disadvantage to be growing up without a father. As a young man, he himself fathered a child with his girlfriend before finishing high school. They considered an abortion, but consciously opted for the baby. Siviwe managed to graduate in spite of the unexpected development, but not with the marks he had anticipated. Supporting his girlfriend took a toll on his studies. Today, he is actively involved in the upbringing of his daughter and has found a permanent job.

Phumelelo Ndlovu was not as lucky. He was determined to support his girlfriend and the daughter she had born him, even though that meant dropping out of school. He now works two jobs. He refers to his beloved daughter as “quite a blessing”.
Marcellino Fillies wants to be a responsible father one day. He is a passionate musician and teaches primary school children to play the marimba. Marcellino’s father died when he was young. His neighbourhood is plagued by alcohol abuse and gangsterism, but he did not become involved in crime. He says he was too busy taking care of his younger siblings.

Growing up with his mother, Marcellino had to look after his younger brothers. After school at around five o’clock, he would go and fetch the youngest one from his crèche. He would get home and make him supper, wash him, play with him, and then put him to bed. In between, he did his best to do his homework. His mother worked far away and only got home after eight o’clock in the evenings.

Individual biographies are of course quite different all over the country. It is important to note that some young men have a positive understanding of fatherhood even though they did not marry the young ladies they had babies with.

When boys made the transition to manhood in the past, they were advised, for example at Xhosa initiation schools, on how to manage their lives as well as homes. Today, this often does not play out anymore. All too often, fathers run away after making girls pregnant.

In South Africa, men show little interest in family planning – and they are normally not expected to do so. Contraception is thus the responsibility of their female partners, who, however, feel that their duty is to please the men. This is a recipe for serious problems, including pregnancy and HIV/AIDS. It would help if all young men had fathers who served as good role models right from the start.

Sonwabiso Ngcowa is a creative writer and social scientist. The examples of the young men mentioned in this essay are taken from a book he co-authored with Melanie Verowoerd: “21 at 21 – The coming of age of a nation” (Vlaeberg 2015: Missing Ink). His novel Nana’s Love was published in German by Peter Hammer Verlag (Wuppertal, 2014).
sonwabisongcowa@gmail.com