Political instability and public resentment can be fuelled by many factors. Border conflicts and the annulment of limits on terms of office are two examples. Acts of terrorism and high unemployment often trigger economic problems and social unrest. And even natural disasters and climate change with severe economic consequences can increase the risk of war and social conflict – which destroy laborious achievements of the past.

last contributed to D+C/E+Z in spring of 2021 as chief executive of the Afrika-Verein, an association of German companies with operations in the continent. 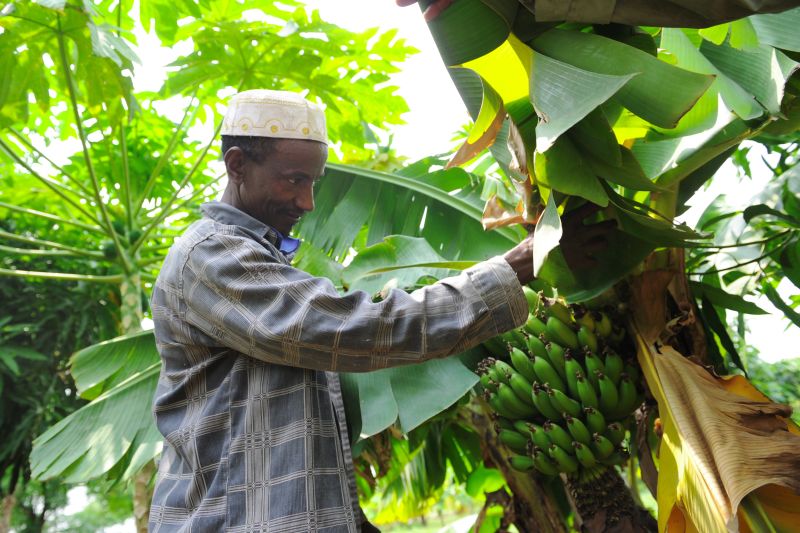 Hase/dpa/picture-alliance Ethiopia is on the way to becoming self-sufficient in agriculture.

Economic development can only take place in the right environment. Governments need public revenues, so they have to raise and collect taxes. State institutions need to work reliably and efficiently, corruption and capital flight need to be prevented and the rule of law established. Beyond that, the best security policy is precautionary foreign policy.

Only five percent of Africans live in a crisis area. A large number of countries are politically stable and act as drivers of development for their regions or even for the continent as a whole. Middle classes are growing, and around half of all African countries are now classed as middle-income countries.

Ethiopia is a good example of a country moving forward. Despite the current drought and ethnic conflicts, it is on the way to becoming self-sufficient in agriculture and is seen as a crucial anchor of stability on the Horn of Africa. Nigeria is the most populous country in Africa and the continent’s largest economy. Last year, there was a change of government following peaceful and democratic elections. Not long afterwards, the National Dialogue Quartet in Tunisia was awarded the Nobel Peace Prize for efforts to build a pluralistic democracy.

According to the Freedom House index, Botswana, Benin, Namibia, Ghana, Senegal, Mauritius and Cape Verde rank among Africa’s exemplary democracies. In many of those countries, direct investment and imports have increased sharply in recent years. Even regions in crisis are making good progress. Somalia is stabilising after the unprecedented disintegration of the state in 1991. And a number of West-African countries have joined forces and achieved initial successes in the fight against the terrorist group Boko Haram.

How closely a country’s economic development is connected with its political stability can be seen from the effects of the low oil price. Nigeria and South Africa ran into difficulties after the drop in crude oil prices and the resulting dramatic fall in export and government revenue. South Africa has seen repeated outbreaks of civil unrest in recent years, and communities in northern Nigeria are terrorised by Boko Haram.

Oil-importing countries such as Tanzania, Kenya and Senegal have been able to profit from the low oil prices, partly thanks to their more diversified export sectors. The highest growth is currently anticipated in Côte d’Ivoire – a result of sound government policy and high cocoa export revenue.

Positive change processes deserve to be more than just acknowledged; they should be actively supported. Prospects for people improve when institutions and other prerequisites for a strong national economy are created at local level. That process needs to be shaped by domestic and international companies. So the local private sector needs to be strengthened and the economic involvement of foreign companies encouraged.