Close to God and the people

African Instituted Churches (AICs) play a large role in Africa. Almost one in four of the continent’s Christians belongs to them. These churches offer a sense of orientation and a spiritual home to ordinary people. Since their developmental efforts have a wide reach, they can be valuable partners for international-development agencies.

contributed to D+C/E+Z in spring 2018 as a Protestant theologian and a PhD in political science. 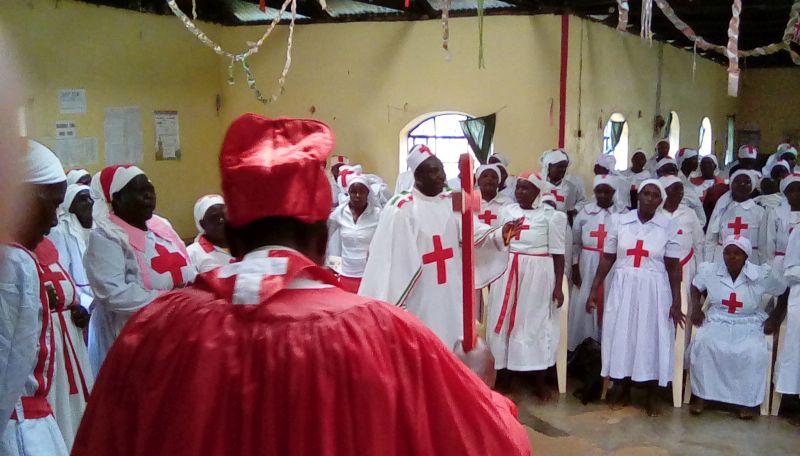 Spitzeck Worship in the Holy Spirit Church of East Africa in Bukoyani, Kenya.

African Instituted Churches (AICs) exist in almost all sub-Saharan African countries. The term applies to churches that are led by Africans and that have deviated from the colonial churches led by white people over the course of the 20th century. This trend should be understood partly as a rejection of European models and partly as resistance to white hegemony. The AICs have followed their own trajectory, cultivating indigenous spirituality. This kind of church only exists in Africa.

The struggle for independent churches began in the late 19th century. During the first wave, African churches arose in the context of the “Ethiopian” movement. It emphasised a biblical reference to Africans, who were called “Ethiopians” in the original Greek text. A second wave began in the 1920s when African prophets started churches that focused on healing and prayer. This was a form of silent protest against colonial powers and missionary churches, which initially ignored, then condemned and sometimes even persecuted them. The new churches played a role in African independence struggles and the indigenisation movement.

African countries’ independence from colonial rule gave the AICs another boost, and it went along with the establishment of yet more churches. Nowadays, there is a multitude of denominations and organisational models (see box). Some 100 to 120 million people are estimated to belong to an AIC. In 2010, there were about 450 million Christians in Africa.

The theology of the AICs draws on a variety of sources and traditions. Their pan-African umbrella organisation, the Organisation of African Instituted Churches (OAIC), distinguishes three basic types:

The AICs have in common that religious communication may be nonverbal. Music, dance, rituals, visions, dreams, clothing and flags are relevant, for example. For a long time, formal theological training was considered an expression of colonial paternalism. The independent churches’ top priority is to not impose any limits on the Holy Spirit. Most of their theology remains unwritten.

Since the 1970s, the AICs have made focused efforts to tap their potential of fostering African-owned development. The OAIC was founded in Cairo in 1978. Pope Shenouda III, the leader of the Coptic Orthodox Church of Alexandria, initiated the step. The idea was to make Africa’s indigenous churches contribute to African unity and self-determination. His action had great symbolic meaning given that the Coptic Church is Africa’s oldest church. He wanted to forge a link with the independent churches of sub-Saharan Africa.

Nowadays, the OAIC emphasises local self-determination and direct access to the divine. Its guiding principle is community without poverty, exploitation or illness. The umbrella organisation promotes “solidarity with the poor, powerless and vulnerable” through its development programmes.

In the past decade, the anti-HIV/AIDS programme was a watershed, both in a social and theological perspective. The members of AICs are affected considerably by the pandemic since most of them live in poverty, with little access to education and health care. The OAIC wants to build just communities. In order to do so in spite of its limited means, OAIC General Secretary Nicta Lubaale relies on resourcefulness on the margins.

The OAIC engages in interfaith dialogue. On several occasions, Lubaale has represented the interests of African churches at the UN level in the debate on the Sustainable Development Goals (SDGs). In July 2014, he organised the African Faith Leaders’ Summit in Kampala to discuss the SDGs.

The OAIC has made astonishing achievements, particularly with regard to inter-church relations. Today, it works closely with the churches that arose from European missionaries. It has become a valued and trusted partner of the All Africa Conference of Churches (AACC). The World Council of Churches recognises the AICs as an independent confessional group.

Scholars from Humboldt University Berlin (HU) have recently been doing field research on whether AICs can serve as local partners for international development agencies. The country they considered was South Africa. So far, the results are quite encouraging. Especially in the field of education, the services of the AICs reach a large number of people, including members and non-members. Churches run schools, universities and training centres.

Occasionally, they join forces with other religious actors. As Marie-Luise Frost of Humboldt University’s Research Programme on Religious Communities and Sustainable Development, points out, one example was the AICs’ participation in events to celebrate the International Day for the Elimination of Violence against Women on 25 November 2017 in South Africa.

Frost encourages international-development agencies to take an unbiased look at the social work that AICs are doing. Their efforts should be assessed realistically. “Respect for the religious identity of the AICs is the key to successful cooperation”, she stresses.

The AICs appreciate the unprejudiced interest of the researchers from Berlin. What matters particularly to African church leaders is that dialogue must take place on equal footing and the AICs must be involved in international development debates. Education is certainly a possible area of international cooperation.

Hans Spitzeck is a Protestant theologian and has a PhD in political science. He has been working in international development since 1992. From 2008 to 2015, he was a theological consultant for the Africa division of Brot für die Welt. His current focus is the connection between church and society in Africa and interfaith relations.
hans.spitzeck@web.de