Bangladesh is a world leader in terms of contributing soldiers and police officers to international peacekeeping missions. This policy makes sense at the national and global levels. By Mohammad Humayun Kabir 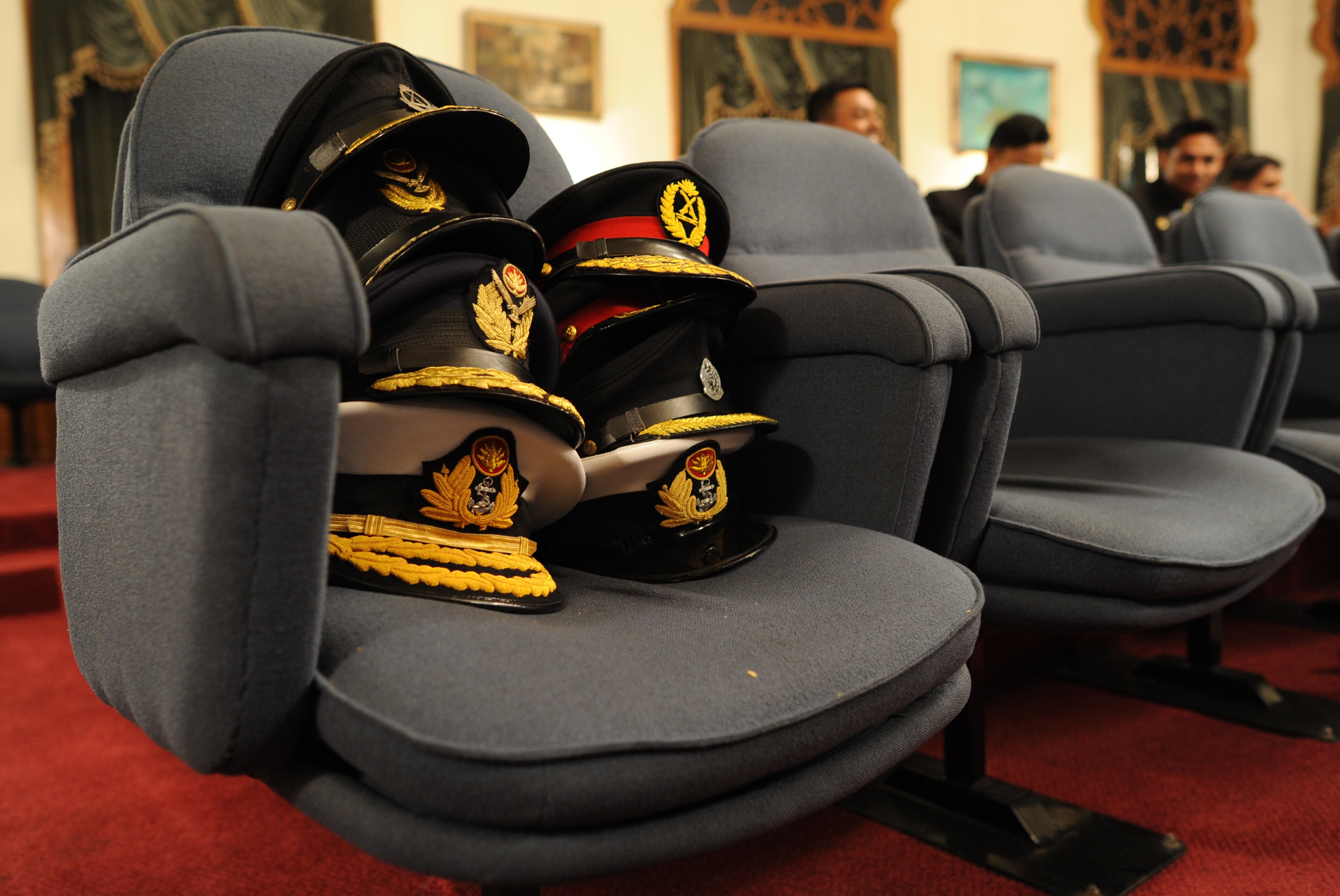 Jensen/picture-alliance/dpa The appetite for dabbling in domestic politics has gone down: officers’ hats taken off for a ceremonial dinner in Dhaka.

UN peacekeeping has come a long way since its start in 1948. There were many changes in the deployment and the meaning, mandate and composition of peacekeeping forces. Peacekeeping operations today are multi-dimensional, multi-functional and truly multi-national, with participants from many developing nations.

Bangladesh has participated in most UN missions. More than 120,000 members of the armed forces and the police have been involved. Currently, only Pakistan has more peacekeepers in ongoing missions. This essay will discuss what motivates the government of Bangladesh to deploy forces abroad and how that benefits the international community.

There are three sets of factors for Bangladesh to support UN missions with troops: global responsibility, regional dynamics and Bangladesh’s national interests. Moreover, there are pull and push factors:

There are more tangible motivating factors too, as Bangladesh benefits from participating in UN peacekeeping missions in diplomatic, financial and military ways:

Moreover, peacekeeping missions allow Bangladesh to develop relations with the conflict-afflicted regions and countries. As a small and vulnerable country, Bangladesh can always enlist this critical international support in its trying times.

A sense of duty

Generally speaking, Bangladesh responds pragmatically to requests to commit troops to the UN or other non-aggressive partners. Sometimes it even volunteers to offer peacekeepers, especially due to humanitarian considerations. However, Bangladesh does not send troops into conflict situations or into circumstances where they might look like aggressors. Nor does Bangladesh compromise its national interests or values.

The world community needs peacekeepers that are willing and able to implement the UN mandate for a particular peacekeeping operation (PKO). The government of Bangladesh claims that its peacekeepers have earned “the credentials of a ‘role model’ due to their professionalism, commitment, impartiality, integrity and humane attitude”. Many have received UN medals of honour, and many have been appointed to positions of leadership in PKOs (including the positions of force commanders and chief military observers).

Bangladeshi troops are known to be highly disciplined, well-trained, hard working and personally committed. Moreover, they have a reputation for adapting to local exigencies and demonstrating a caring attitude towards the local people in the countries concerned. For instance, they have shared UN rations with the people and extended medical facilities to them. Bangladeshi peacekeepers tend to inspire confidence among conflicting parties as well as non-combatant locals.

Bangladesh is a resource-strapped South Asian country. It is obvious that it is not pursuing any hidden power agenda in other continents when it joins PKOs. Bangladeshi troops do not interfere in the domestic politics of the nations concerned, nor do they antagonise any factions by displaying arrogance. That Bangladeshi peacekeepers are considered acceptable almost everywhere in the world contributes to the success of UN missions.

Bangladesh, India and Pakistan are the three major countries of South Asia, and all three are among the world’s top peacekeeper-contributing nations. Bangladesh has a number of unresolved bilateral issues with the other two South Asian countries. It certainly does not hurt that their peacekeepers work together on many UN missions. There is quite a bit of camaraderie and networking at the personal level, but it does not graduate to a level where it would have any impact on the country-to-country relationships. South Asian tensions are hardly abated by joint participation in PKOs elsewhere.

Operating in conflict zones is dangerous of course. There is the risk of death and injury in action. Moreover, there are illnesses and accidents, including road mishaps. According to the government of Bangladesh, 112 peacekeepers made the supreme sacrifice for peace from 1989 to September 2013. The figures are: 91 from the army, four from the air force, one from the navy and 16 from the police. The figure for injuries was not available.

There are human costs of other dimensions. Most peacekeepers, particularly the lower-ranking ones, are separated from their families families for prolonged periods. Such separation can cause several problems. Moreover, there is a risk of troops bringing in social evils – alcoholism, for instance – from conflict areas. So far, however, this has been kept in check by imposing strict discipline during missions.

The military organisations are affected too. When the government deploys troops abroad in big numbers, the units at home may run short of adequate manpower. Other problems may arise from frustration among troops who would like to go on UN missions but are not deployed. Finally, Bangladesh has to bear the initial costs of the equipment its troops take along on UN missions. Depending on the size of the contingent, the category of weapons and other factors, this may amount to a huge sum for a country like Bangladesh.

Politics in Bangladesh is normally quite divisive. When this essay was being finalised in December, the country was heading for elections soon, and tensions were already evident. There is not much consensus on anything. A noteworthy exception is, however, the support for international peacekeeping. On the one hand, the people in general appreciate that such missions serve a worthy cause and boost Bangladesh’s international standing. On the other hand, many families benefit economically when members or relatives join UN peacekeeping missions.

Bangladesh’s participation in UN peacekeeping missions has boosted the country’s reputation and shored up its international image. Moreover, there are political and strategic gains. It is interesting that a small – though certainly populous – country with a comparatively weak state should contribute so much to peacekeeping. It is noteworthy, moreover, that participation in PKOs has reduced the armed forces appetite for meddling in domestic politics (see side bar "Background information).

The key factors to success of a UN mission are the clarity of the mandate, the unity of purpose, the unity of command and the unity of understanding of the conflict. Bangladeshi peacekeepers remain honestly and steadfastly focused on all of these and live up to the letter and spirit of the ideals of the UN in general and of the international peacekeeping in particular. In comparison, the financial benefits that accrue to the country are marginal. The number of 125,000 persons involved in peacekeeping is large – but it is only a small fraction of a nation of 160 million. All in all, indeed participation in UN peacekeeping missions has been the brightest of chapters in Bangladesh’s relationship with the UN.