The title of the World Bank’s recently published World Development Report 2019 is: “The changing nature of work.” Its demands include more government efforts to build human capi­tal, universal social protection and better taxation. Its strategic approach fits both the informal sector and the digital economy. 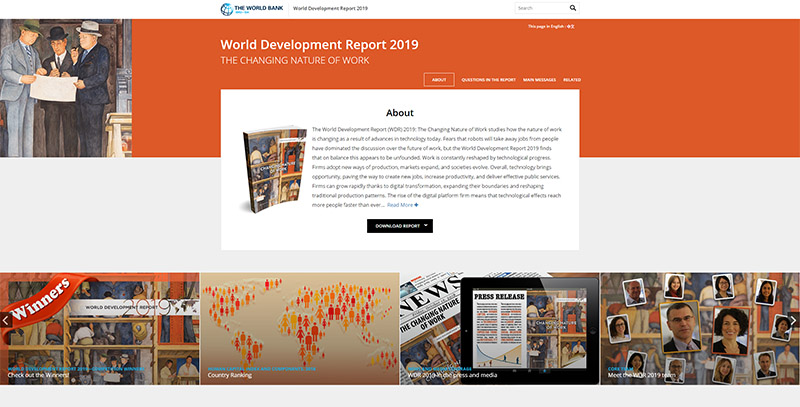 In its response to the flagship publication, the International Trade Union Confederation has criticised the World Bank for being excessively market-orthodox. The reason is that the World Development Report (WDR) is basically in favour of permitting whatever agreements employers and em­ployees conclude with one another. In truth, however, the WDR is quite statist. It makes governments responsible for providing universal social protection, building human capital and generating sufficient revenues.

The report’s starting point is that technology may be eroding job opportunities, so worries about long-term mass unemployment make sense. According to the authors, however, the worries are probably overblown. While they expect simple and repetitive jobs to disappear due to automation and artificial intelligence, they reckon that new and more demanding ones will emerge (see article by . To what extent that will happen, remains to be seen, but it is clear that technological progress is changing both labour market demand and labour relations.

Increasingly, people will need advanced cognitive skills, socio-behavioural skills and specific skill combinations to be employable, according to the WDR. Therefore, building human capital is essential, and governments must act accordingly. In the authors’ eyes, the implications are that:

Concerning labour relations, the WDR points out that short-term employment and freelancing are becoming more common in technology-related sectors and rich nations in the course of digitalisation. More­over, people must keep upgrading their skills and knowledge in order to stay able to do paid work. Lifelong job security with a single company is becoming ever rarer. Therefore, social protection must improve, the WDR states.

The World Bank scholars worry especially about all those who do not benefit from the kinds of protection that go along with formal employment in most countries. They insist that a minimum level of social protection must be available to everyone, regardless of the employment situation. Minimum basic incomes and universal health coverage are considered appropriate.

In a fascinating twist, the WDR points out that this approach would also improve the fate of billions of people who are toiling away in the informal sector of developing countries and emerging markets. Their share amounts to 50 % in Latin America and even 70 % in Africa, as the Bank’s statistics show.

The established social-protection model of advanced economies bypasses the informal sector and does not fit the increasingly flexible labour relations in digitised economies, according to the WDR. It is to fund social-protection systems with payroll taxes which are linked to wages. Only those who contribute money are entitled to services. Only formal employment counts since only formal employment goes along with payroll taxes. Instead, the World Bank wants governments to establish universal protection systems and pay special attention to the poor. That trade unions resent the approach and prefer the payroll model shows that their priority is to protect people in formal employment, rather than workers in general. It remains to be seen, of course, to what extent the new strategy will actually guide World Bank lending.

To fulfil their respon­sibilities, governments will need sufficient funding. The WDR suggests they must improve both tax legislation and tax enforcement (see briefing on tax disputes on our D+C/E+Z Website). The World Bank scholars want all kinds of taxes to be considered, including value added taxes, income taxes and property taxes.

The WDR largely shies away from tackling the question of income redistribution. It does not whole-heartedly promote progressive taxation that would put a greater burden on the well-off. Obviously how­ever, any kind of tax-funded government action that re­duces poverty ultimately amounts to redistribution.