Stepping into the light

The international art scene is dominated by the west and still neglects art from Africa. But change is under way and African artists are making a mark. Art expert Yvette Mutumba told Sabine Balk what is exciting about contemporary art from Africa and how artists fare in their home countries.

contributed to D+C/E+Z in autumn 2015 as research curator for Africa at the Weltkulturen Museum, Frankfurt am Main. She holds a PhD from the University of London for studies on contemporary art from Africa. She is also co-founder of ”C&”, a magazine for contemporary art from African perspectives that is financed by the German Federal Foreign Office. 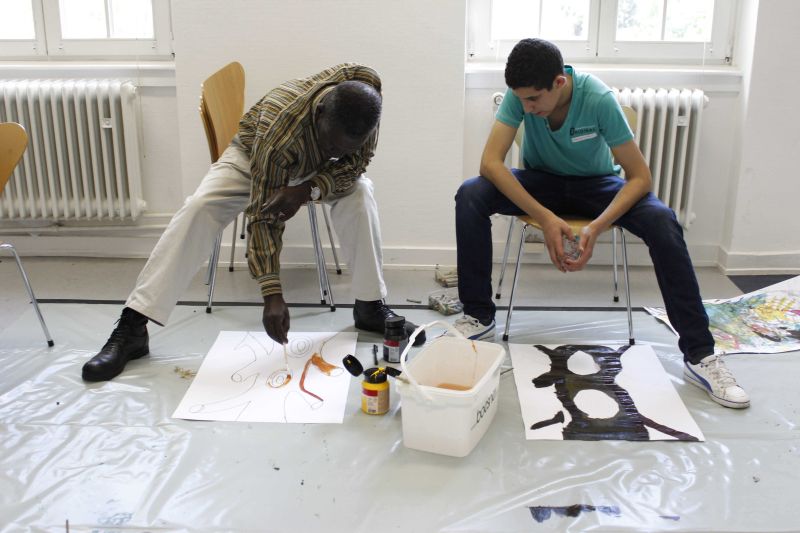 What are the differences between contemporary European, African and Asian art?
I don’t use the term “African art” because I don’t think such a thing exists. The phrase suggests a category that exists outside European art, implying that there is one particular African style. That is not the case. Art from Africa is far too heterogeneous. It comprises a whole range of forms and modes of artistic expression, from painting to sculpture, to digital art. Performance art, installation art and digital art are major facets and they certainly do not fit the widely held stereotypical view of art from Africa. So I prefer to speak of contemporary art from Africa and the diaspora or of art from African perspectives. That says: sure, there are certain shared backgrounds, but not a homogeneity that would define an African style. The only thing that the different scenes in Africa have in common is that many countries in Sub-Saharan Africa gained independence from their colonial rulers at around the same time in the 1960s.

What impacts did that have on art?
Many artists tried to redefine themselves and find a new national identity. It happened in lots of countries but the artistic outcomes were extremely diverse. Senegal, for instance, had Léopold Sédar Senghor as president – a man who was a poet himself. He did a lot to promote art and culture, and even spent 30 % of the national budget on it. So developments in Senegal differed considerably from those in Uganda, for example. We speak of African modernisms today – deliberately using the plural to underline that there are different, parallel modern art movements. Some artists at the time consciously chose to focus on tradition, others were inspired by the political turning-point to break new ground.

Despite all the progress made, art from Africa is still not seen as equal to European art. Why is that?
It still stems from the fact that the west has written art history, defining what is and is not art for a very long time. As a result, art from other parts of the world has either gone unnoticed or been considered inferior. Which is why what happened at the Frankfurt Weltkulturen Museum is so special. We started collecting contemporary art from Africa back in the 1970s and made it a core element of the collection in the mid-1980s. That caused an outcry in museum circles. It was incomprehensible. The museums did not regard it as art of equal merit. It was not until 1989 and the so-called “Global Turn” that things slowly started to change. Art history narratives were questioned and ignorance of non European art was criticised. The first major exhibitions of contemporary art from Africa were staged. Then, in the early 2000s, an African curator was appointed for documenta 11 – Nigerian Okwui Enwezor – and major international museums such as the Tate Modern in London started putting art from Africa or Latin America on show. Doing so is still not the norm but the process of overcoming old hierarchies in art has started.

How do African artists see themselves today?
People today can no longer be defined by where they come from. There are artists who were born in Lagos, studied in London and are represented by a gallery in Milan. Those people are often referred to as “Afropolitans”. There is a tendency for artists who have travelled a lot or studied and lived elsewhere to return to their home countries and support or create local institutions. They try to make a difference at home. Artists are questioning established structures. Why are New York, London and Berlin the places where careers are made. Why not Lagos? They also want to be active at home and use the network they have created abroad to establish their own art space with other artists. That is a new phenomenon.

Is art becoming more international?
There has always been an international network but it is obviously a great deal more extensive and easier to use today because of technology. Digital networking has increased and the term “global art” is used in an almost inflationary manner, referring to an inclusive idea of art history. The art scene pays more attention to contemporary art, but that is not to say that there was no art previously. I have a problem with the fact that Africans are sometimes portrayed as newcomers to art simply because they are only now being noticed here. Senegal’s El Hadji Sy, who is currently celebrated by a seven and-a-half month retrospective at the Weltkulturen Museum in Frankfurt, was doing workshops with international artists as far back as the 1980s. And there are plenty more examples I could mention.

What influence does a country’s development status have on artists and do artists have an effect on a county’s development?
There is a causal relationship, of course. It can be seen in South Africa, for instance, which has a strong economic base. But it is not the only factor. Countries like South Africa and Nigeria may enjoy more or greater international attention, but that does not mean that nothing happens in other countries. Art with merit beyond the conventional stereotype of African souvenir arts and crafts is found in many regions. There is money in all countries, and elites that promote art in countries that we don’t think of as rich. For a long time, African elites may have had no interest in art, but they are starting to reconsider things. They now realise that investing in art can make good sense.

When is something art, and when is it “merely” arts and crafts?
The items sold as souvenirs at tourist markets are certainly not regarded as contemporary art even by local art lovers. They are arts and crafts. There is a difference, anyway, when it comes to video or performance art. There is no mass production and nothing that can be reproduced. And how much an artist is worth depends on art market dynamics. It also depends on how well artists can market themselves. But that applies everywhere, not just in the African market.

Is art in Africa more political than elsewhere?
Yes, it tended to be more political – especially in the 1960s when authenticity was a big issue. What I also find, though, is that there is a widespread expectation that art from Africa should deal with poverty or AIDS or other such subjects. But art in African countries is just as political or apolitical as in other countries. There are, of course, artists who are political but there are also those who work simply at an aesthetic level – some of them in a deliberate bid to flout expectations.

Can artists contribute to a country’s development, do they play a pioneering role?
There are certain artists – even curators – who play an important role in that respect. But not every artist. In South Africa, for instance, there are artists and collectives addressing homophobia, which highlights the issue and can make a difference. And in Lubumbashi in the Congo, the Picha Art Center was set up two years ago to focus on current issues such as the problems presented by former copper mines. They also involve local communities and see art as a participatory medium. They certainly make an important contribution.

Who funds art in Africa?
A lot of money comes from the private sector or from intermediary organisations such as the Goethe Institute or the British Council. Those organisations are still very relevant in local art scenes – and a residual presence of former colonial powers. Some members of Africa’s art scene feel ambivalent about this situation. On the one hand, there is a desire for independence; on the other, the money is urgently needed. But there are also a number of young artists who take a very pragmatic view, saying we will gladly take the money, but we will not compromise on content and will not be part of the intermediary system.

How are artists regarded in African countries?
That depends on the country and tradition. In many countries, there was artistic production long before modern art emerged. In the Congo, for example, carvers enjoyed high status in the Luba Kingdom from the 16th to 19th century, much like court painters in Europe.

Where can one study art or train as an artist in Africa?
There are a number of well-established, well-run art schools. But it depends on where you are. South Africa is at international level, Nigeria and Uganda have art schools that have been going since the 1960s. Some scenes, such as photographic art in South Africa, have a formative influence on other artists. In Uganda, the art academy is mainly known for painting. There are also lots of residency programmes that are offered by museums or foundations all over the world, where artists are invited to work and study for a certain length of time. That is a popular option.

Yvette Mutumba is research curator for Africa at the Weltkulturen Museum, Frankfurt am Main. She holds a PhD from the University of London for studies on contemporary art from Africa.
yvette.mutumba@stadt-frankfurt.de
http://www.weltkulturenmuseum.de

Yvette Mutumba is also co-founder of ”C&”, a magazine for contemporary art from African perspectives that is financed by the German Federal Foreign Office.
http://www.contemporaryand.com/