Extreme poverty in Bolivia has fallen by one third in the past decade. Many Bolivians believe that the policies of President Evo Morales are the reason. However, critics argue that Morales’ socialist approach is unsustainable.

last contributed to D+C/E+Z in winter 2015/2016 as a journalist based in Cochabamba.

contributed to D+C/E+Z in winter 2015/2016 as a freelance journalist and lecturer based in Cochabamba. 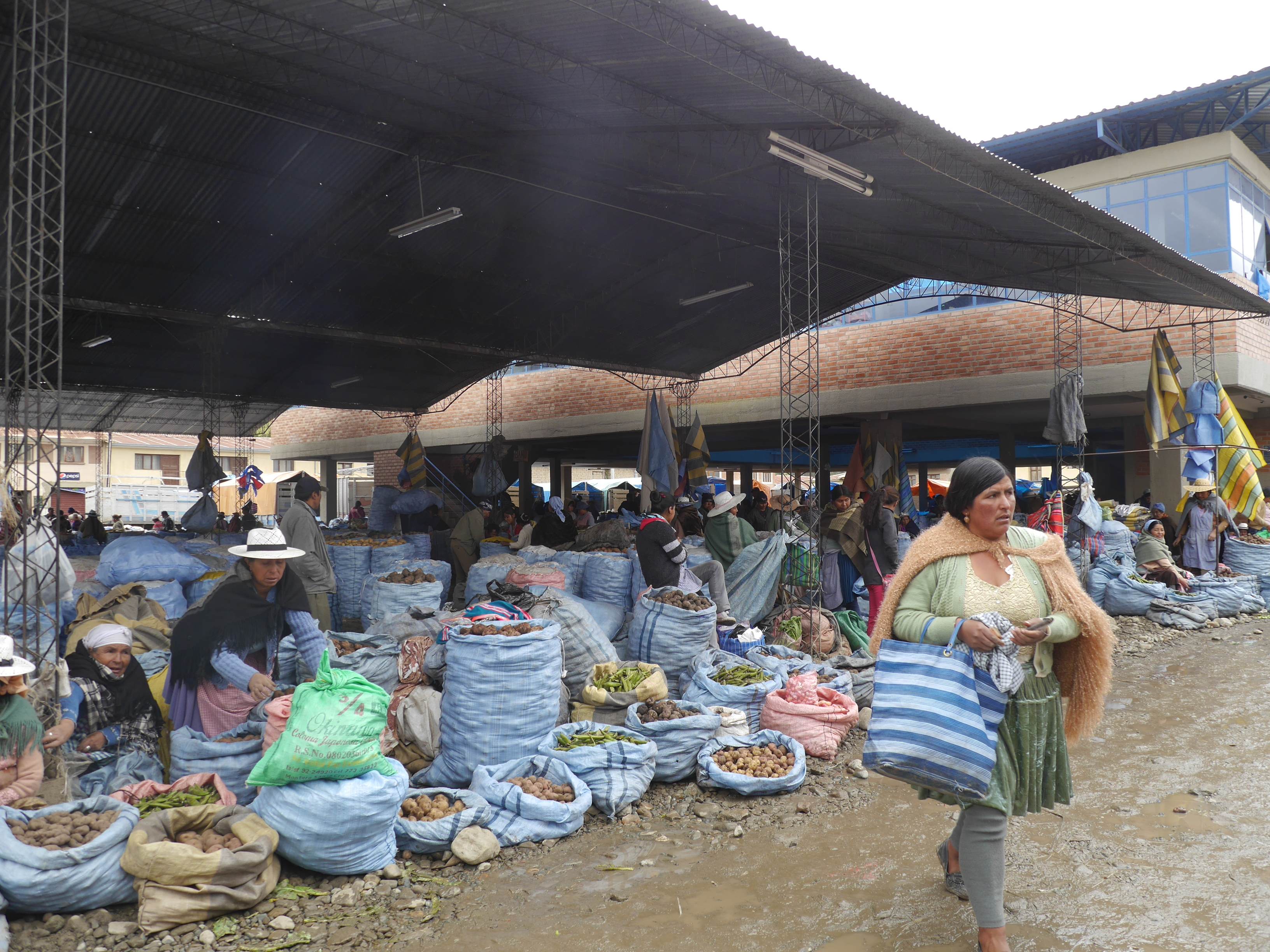 It is the first, and likely the most important item on the UN millennium agenda: the struggle against hunger and extreme poverty. Surprisingly, Bolivia has achieved major successes on the road to this goal. For a long time, the country lagged behind all other South American countries in social and economic terms. But since the “Movement towards Socialism” (Movimiento al Socialismo – MAS), the party that currently governs the country, was elected to form the government in 2005, extreme poverty has dropped from 38 % to 21 % according to the Bolivian definition. INE, the national institute of statistics, reckons that moderate poverty is down from approximately 60 % to 45 %, although a large urban-rural gap still persists. “Moderate” poverty means that people have enough to eat, but no money for education or transport. The leftist government in La Paz has been praised by Dennis Racicot, who works for the UN High Commission on Human Rights: “We commend the progress made towards reducing extreme poverty, progress in education, health care and the democratisation of the ability to earn a basic living.”

Bolivia’s Ministry of Economy and Finance indicates a rise in people’s incomes as a key driver of budding prosperity. In 2005, the official urban unemployment rate was 8.2 %, and by 2012 the share had sunk to 3.2 %. Bolivia has the lowest unemployment rate in South America today. Social programmes are critical to poverty reduction, and 33 % of the people have ­benefited. Moreover, the governmental development bank BDP has issued loans worth $ 200 million to small enterprises.

A good life for everyone

According to government officials in La Paz, the positive trend in poverty reduction is primarily due to the “vivir bien” model for national development. Vivir bien means to live well. In Bolivia, the term includes coexistence in diversity and harmony with nature. It is a core principle in the worldview of indigenous peoples in the Andes. The meaning of living well extends beyond material prosperity; it encompasses protecting the environment and cultural identities. This indigenous value system of sustainability has been enshrined in Bolivia’s constitution during the MAS years.

In tangible terms, the government’s vivir-bien policy is based on investments in the public sector geared to making education, health care and transport accessible to everyone. Government spending is obviously crucial. “We have achieved growth that rests on the use of our natural resources and the redistribution of income,” says Luis Acre, the Minister of the Economy.

The Bolivian economy is indeed on an upward trend. It has recently shown the second-strongest economic growth in the region, the national budget is balanced, and the balance of trade is in surplus. At the same time, social programmes have been ex­tended to reach the poorest segments of the people.


What is behind the positive numbers?

Coloni is located in one of the world’s poorest regions. This community of 20,000 people is nestled in a high mountain valley in the Andes, at 3,300 metres in elevation. The people here earn their living almost entirely from potato farming. Only 10 years ago, the average monthly income was the equivalent of about € 25. Mere survival was the main aspiration.

Things have changed. More and more people are moving beyond pure subsistence farming. The state is helping out with infrastructure. Coloni now has clean water, power lines and halfway paved roads. “Earlier, we needed horses and donkeys to bring our harvest to the main road. Today, we drive on new roads to transport our products,” says Hilmer Rodriguez, a farmer. People in Colomi have become able to save a little. Rodriguez, for example, has managed to buy a small stone house for his family. He is convinced that he has to thank Presi­dent Evo Morales, who has been running the country for four years, for it. “These days, we simply have more money in our pockets,” says Rodriguez.

The country is in the grip of a huge transformation. The socialist government refers to this profound upheaval as “el cambio”, “the change”. A new constitution was passed in a referendum five years ago. It massively strengthened the rights of the indigenous peoples. The country’s approximately 36 indigenous peoples and groups are now officially recognised, their languages have been elevated to the status of official languages, and the indigenous principle of vivir bien has been made a goal of state policy. Bolivia now considers itself a “plurinational state”.

The new, ethnically inclusive constitution has stabilised the country to the extent that the entirety of the population now participates in the democratic project. This is a huge developmental success in a country that used to have a rather fragile state even while it enjoyed substantial donor support.

At the same time, revenues from Bolivia’s natural resources have benefited large segments of the people for the first time. In 2006, the president obtained more favourable terms in contract renegotiations with oil and gas multinationals. Morales confidently states that the nationalisation of mining companies, telecommunications companies, water and power utilities, and the strengthening of state agencies in general during his eight years in office prove one thing: “Wealth needs to be socialised to fight poverty.”

However, Morales’ approach is ultimately funded with oil and gas revenues. From an environmental standpoint, that does not fit well with the vivir-bien principle. The policy is short-sighted, moreover, because fossil fuels are a finite resource.

For now, the socialist project in Bolivia has coin­cided with rather favourable prices in world markets. Gas prices climbed to record heights during Morales’ presidency, and export revenues tripled since he took office. He wants everyone to share in this new-found wealth. Policy instruments include a guaranteed monthly payment for pensioners, a one-time school subsidy for children, a household subsidy for pregnant women and substantial diesel and gasoline subsidies.

Critics say that the social programmes are mere election gifts, and that this economic approach will not work sustainably in the long run. One of the most prominent critics is Roberto Laserna, who heads the independent think tank CERES (“Centro de Estudios de la Realidad Económica y Social”) in Cochabamba. “The situation in Bolivia is schizophrenic: we have a socialist government, but the informal sector –meaning the world of employment not subject to any contracts and without social protection – has grown under Evo like never before,” says Laserna. He adds that the government’s investment policy does not make sense. According to Laserna, the state is wasting vast sums of money. He points out that some sugar and milk factories are not being operated due to the prohibitively high costs of the Brazilian commodities needed or because there is no electric power in high-altitude locations at 4,000 meters.

Laserna appreciates the results Morales has achieved in fighting extreme poverty, but he nonetheless says the situation is sobering as over 40 % of Bolivians are still classified as “moderately” poor. In Laserna’s opinion, there has been no truly sustainable progress in the battle against poverty in Bolivia. Laserna lays the blame on one fundamental problem: the agricultural operations of small Bolivian farmers are “simply not productive enough to allow them to escape poverty.”

That strikes a sensitive nerve. The level of agricultural productivity in Bolivia is the lowest throughout Latin America. According to Horst Grebe, who heads the independent research institute PRISMA in La Paz, what the agricultural sector needs is “modern technology and modern organisation”. In his eyes, the main problem is an anti-modern government, which wants to maintain the old indigenous culture for purely ideological reasons: “Its policy amounts to a criticism of the West, but it is impossible to put into effect in practical terms. You cannot beat the West by looking backwards.”

Horst Grebe suggests that the government should shed its paternalistic attitude towards farmers so that they will liberate themselves from structural poverty. In other words, he wants to see prosperity evolve on the base of private-sector growth. However, while small-scale farming may be unproductive, the government considers it a part of the Andean tradition that is worth protecting. Bolivia is looking for its own way out of poverty. It has made considerable progress ­recently. The state will carry on fighting poverty with social programmes it funds with gas revenues. The success of this socialist government will thus ­continue to hinge on world-market prices.

Linda Vierecke works for the GIZ in media development. She lives in Cochabamba, Bolivia.
linda.vierecke@giz.de

Christoph Peters is a freelance journalist and lecturer based in Cochabamba.
drcjpeters@gmail.com