In Cambodia, a civil-society organisation is promoting professional mental-health care. Engaging traditional authorities such as faith leaders and healers is essential.

contributed to D+C/E+Z in summer 2019 as a counsellor with TPO Cambodia.

contributed to D+C/E+Z in summer 2019 as a counsellor with TPO Cambodia.

contributed to D+C/E+Z in summer 2019 as a project coordinator with TPO Cambodia.

contributed to D+C/E+Z in summer 2019 as an advisor to TPO Cambodia, seconded by GIZ in the context of Germany’s Civil Peace Service (CPS). 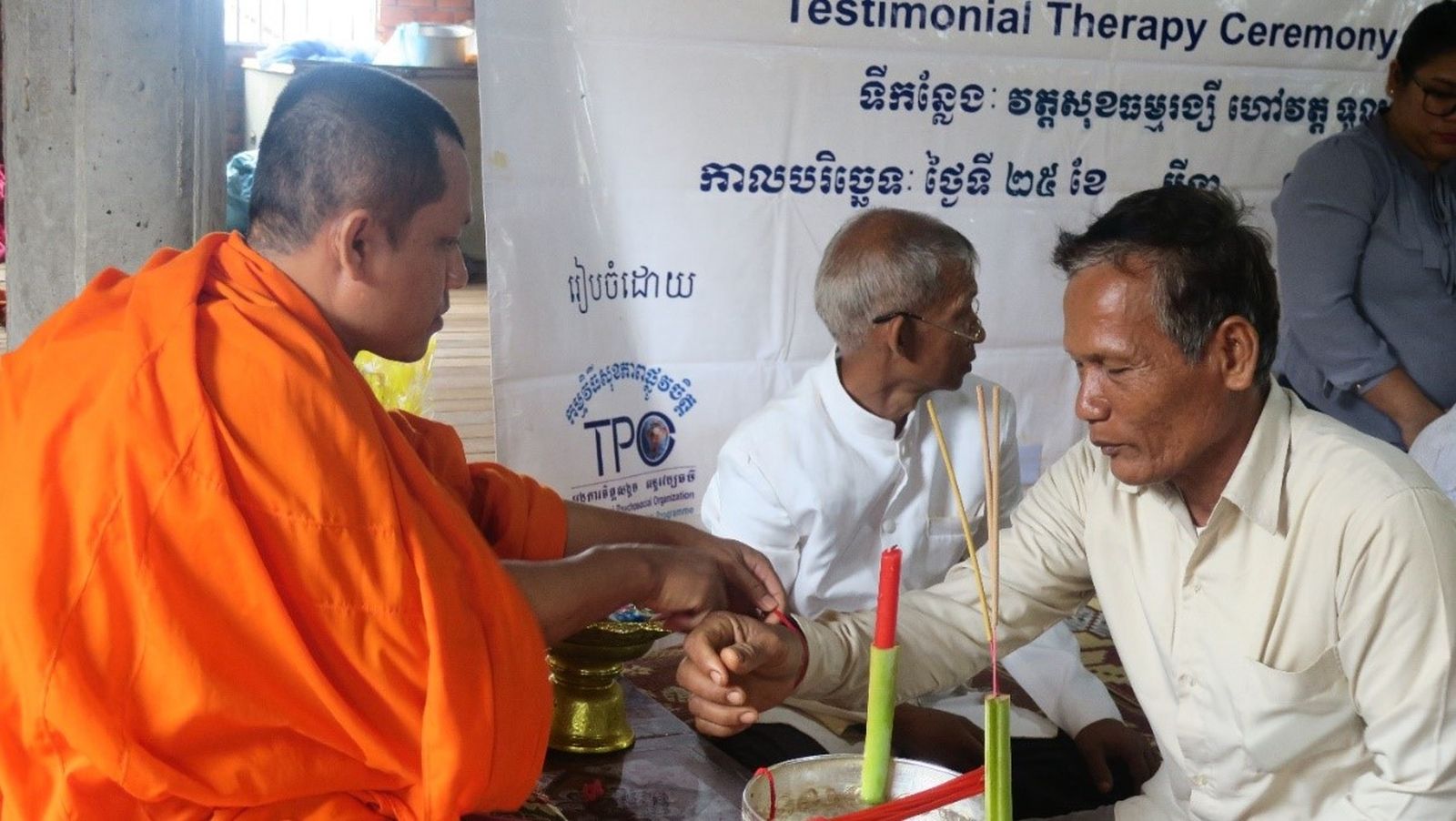 TPO A monk ties a red ribbon around the arm of a Cambodian man for protection purposes. The red ribbon also stands for prosperity and happiness.

Cambodia has seen decades of war, political unrest and instability. While the nation has come a long way over the past four decades, people are still struggling with the painful legacy. At the same time, they must cope with challenges like poverty, unemployment, political tensions, climate change, and the health-care system still needs to be developed and is ill-prepared to deal with mental-health problems (see box).

The Transcultural Psychosocial Organisation (TPO) Cambodia is committed to providing mental-health services to Cambodians in Phnom Penh as well as to community members living in rural areas. TPO was established in 1995 as an affiliate of a Dutch non-governmental organisation and has been registered as an independent Cambodian organisation since 2000. Its approach is to reconcile modern medicine with the traditions and beliefs that mark Cambodians’ lives.

TPO runs a treatment centre in Phnom Penh and provides training for partner organisations. The organisation is raising awareness and advocating for mental-health services throughout the country. Some of the work is linked to – and contributes to – conflict resolution, peacebuilding and social justice.

The executive director of TPO is Chhim Sotheara, a psychiatrist. He points out the importance of psycho-social treatment to be culturally relevant. It is essential to understand how members of a particular culture recognise and describe specific symptoms of psychological disorders. According to him, different cultures have different “idioms of distress”. TPO pays attention to these matters and is engaged in raising awareness, especially among those persons who are influential at the grassroots level. These leaders are engaged, and TPO is eager to convey insights of scientific medicine to them, but also wants to learn from them.

TPO relies on a multi-professional team to implement culturally appropriate, fitting interventions. The staff includes psychiatrists, psychiatric nurses, psychologists, psychotherapists, social workers and para-professionals. The para-professionals are traditional healers who have been given additional skills training. Engaging them is of crucial relevance.

The point is that, to a large extent, they are the backbone of Cambodian health care. Unfortunately, many of them are getting old, and their valuable knowledge is not documented. As they do not earn much money, young people are not interested in becoming traditional healers. It is important to integrate them in modern approaches, document their wisdom and teach them some western skills (concerning both treatment and diagnosis). TPO hopes to continue and intensify this kind of work.

In Cambodia, traditional beliefs largely determine how people explain mental-health problems and how they cope with them. Typically, they attribute problems to ruptured relationships with the spirits of ancestors. Moreover, the Buddhist concept of karma is widely used to explain a person’s current conditions. Complicating matters further, Cambodian society is not culturally homogenous, so the local context matters.

Moreover, there are gender aspects. The traditional authorities are predominantly men and tend to consider women to be often over-anxious and “to worry too much”. The mental-health problems of men, by contrast, are said to stem mainly from substance abuse, and abnormal behaviour is often explained with poverty limiting their ability to provide for their families. If they suffer chronic pain, which can result from experiencing mental problems, that is explained with hard farm work.

A Cambodian family will normally do its best to integrate a family member suffering a mental-health condition in its everyday life as long as possible. They will seek help from healers once that person starts to disrupt daily family routines, for example by acting violently or bringing shame to the family by breaking social norms (roaming around dirty, for example). The family is also likely to look for help once the burden of caring becomes too great.

In such cases, Cambodians often turn to religious leaders, traditional healers or the elderly first before approaching medical professionals. Relevant categories of healers include:

Faith leaders and healers are normally approached for a number of sessions. Typically, the condition of the patient improves initially, but relapses are likely to occur soon. If community members can afford it, they then become increasingly prepared to turn to science-based health care. Local medical doctors and nurses placed at health centres tend to lack in most cases the necessary training however.

The first step towards improving the current situation is to improve access to professional services, raise awareness and teach medical professionals and para-professionals relevant skills. Moreover, it is eminent to merge what western psychological and psychiatric methods have to offer with local traditions.

Panha Pich is a project coordinator with TPO Cambodia.
pichpanha@tpocambodia.org

Sharon Gschaider-Kassahun is an advisor to TPO Cambodia, seconded by GIZ in the context of Germany’s Civil Peace Service (CPS).
shkassahun@gmail.com