Many governments are half-hearted about IP waiver

In October 2020, South Africa and India launched the proposal to waive all intellectual property (IP) rights that are relevant temporarily in the global response to Covid-19. Rules of the World Trade Organization (WTO) protect IP, but they also allow for some flexibility in regard to public health. Achal Prabhala, a civil-society activist who specialises in pharma issues, told Hans Dembowski in an interview why this current IP-waiver debate only took off slowly – and what needs to happen to boost global vaccine supply fast.

contributed to D+C/E+Z in spring of 2021. He is based in Bangalore and coordinates the AccessIBSA project, a tri-continental civil-society initiative that is fighting for better access to pharmaceuticals in India, Brazil and South Africa. It gets support from the Shuttleworth Foundation. 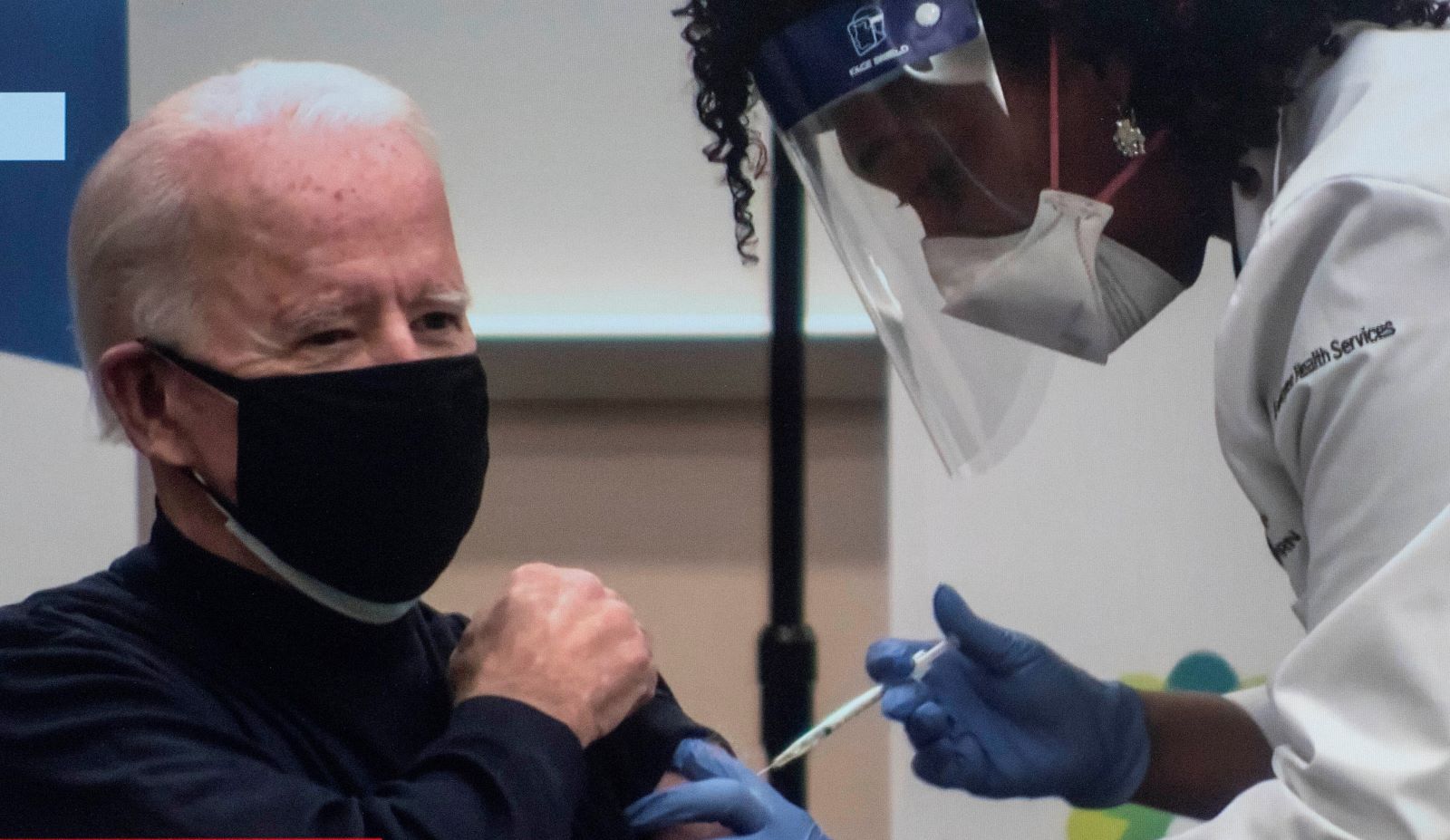 Msnbc/picture-alliance/ZUMAPRESS “The USA has been hoarding vaccines rather than helping other nations to get inoculated”: Joe Biden got his first jab as president-elect before Christmas.

Are IP rights slowing down global vaccine production?
Absolutely. The law only permits patent holders to manufacture any of the vaccines in circulation. In this regard, IP matters. Of course, you need more than the legal permission to produce the vaccines. You also need the relevant technology. To use a metaphor, you need something like a manual that tells you how exactly to use the patent. Without that knowledge, the patent is worth­less. In other words, pharmaceutical innovations are protected by two monopolies: one is the legal patent and the other is its technological application.

But a patent must spell out precisely what an innovation is about. Doesn’t that mean that competent scientists and engineers can figure out how to use it fast? It is much easier to reverse-engineer something known to work than to invent something completely new.
Yes, reverse-engineering is possible and will normally take four or five months or so. Afterwards, clinical trials and testing will take a lot of time. Unless you use the same technology as the patent holder does, regulators will treat your reverse-engineered product as a new one, so the entire approval process starts anew. If you use the original technology, however, you will get approval much faster.

South Africa and India first proposed the IP waiver for pandemic-response purposes in October. At the international level, it took this debate more than six months to really get started. South Africa and India would have achieved much more and much faster if they had supported their proposal with assertive public diplomacy. They did not involve international civil society; they did not engage global media; they only relied on formal diplomatic channels. Doesn’t that look half-hearted?
Yes, it does, and the full truth is that the top government leaders were not paying much attention. This initiative really started among diplomats. It was the brainchild of a member of the South African delegation to the WTO in Geneva, Mustaqeem de Gama. He convinced colleagues in his own team, but also in the Indian team. The governments of South Africa and India deserve praise for letting them move ahead, but that is really all they did. Next, civil-society activists across the world took up the cause. I agree with you: had President Cyril Ramaphosa and Prime Minister Narendra Modi held press conferences insisting on the matter in October, things would’ve moved for much faster.

They could have done more than merely hold press conferences. They could have declared that their governments would grant compulsory licenses for Covid-19 related pharmaceuticals, including vaccines. WTO rules permit every country that kind of flexibility in regard to IP rights if that is necessary to safeguard public health. Why did they not do that in October?
There are several reasons:

The IP waiver debate gained momentum in late April when the US administration declared it was in favour of it. Will that make a difference?
Here, my answer is both yes and no. On the upside, it is good that President Biden has publicly acknowledged that patents are part of the problem, not part of the solution. However, the stance of his administration is half-hearted too. Their statements please civil-society activists and sound generous at the international level, distracting attention from the fact that the USA has been hoarding vaccines rather than helping other nations to get inoculated. But the US has only moved in regard to vaccine patents rather than all medically relevant supplies. More­over, what Washington and the WTO are saying basically adds up to: Let’s cooperate on concluding a new agreement on IP rules for vaccines in December. There is no sense of urgency even though we are living in a devastating pandemic. We must not waste time. Coronavirus is currently killing 15,000 persons per day around the world.

So what should Biden do?
Well, he could insist on speeding up decision-making in the WTO context and make sure his EU allies, and particularly Germany, come aboard. Moreover, he could make US-based vaccine suppliers suspend their IP rights and share their technology with pharma companies in distant countries. Two American corporations own the rights to highly useful vaccines for us in poor countries. Both can make a huge difference in developing countries. The Johnson & Johnson vaccine is the only one that merely requires a single dose. The Moderna vaccine is interesting because it uses mRNA technology. This technology does not require biological ingredients which take considerable time to cultivate. It is basically a chemical technology, so production can be ramped up much faster. My point is that the international community must boost vaccine supply as fast as possible. Biden can make it happen, if he wants to. It is his moral duty to make it happen.

German policymakers say they are willing to discuss IP rights, but insist that patents are not the main bottleneck and that IP rights drive innovation.
Well, let’s put things in perspective. Pharmaceutical corporations have benefited from massive subsidies for research and development. Moreover, pre-orders for vaccines are worth billions of dollars. That is the incentive the companies concerned care about right now. They know they will make a lot of money. Moreover, the proposal is to waive IP rights temporarily in response to the ongoing pandemic, not to abolish patents for ever. And while patents may neither be the only obstacle nor the most important bottleneck at this point, it is impossible to argue that insistence on IP rights can somehow speed up vaccine innovation and development.

Aren’t patents over-rated as drivers of progress anyway?
Yes, they are. The full truth is that IP rights mostly hamper health care in developing countries for two reasons:

Western governments have a long history of reiterating that public health depends on IP rights. That rhetoric serves powerful interests of multinational corporations, but it does not make much sense in the developing world. It is noteworthy that, even within the EU, policymakers are beginning to back away from that stance. That includes President Emanuel Macron of France and Prime Minister Pedro Sanchez of Spain.

What about Russia and China? Covid-19 vaccines have been developed in both countries.
Russia and China have been quiet, but largely supportive, as I understand. It is actually very good that not only western countries have come up with viable vaccines. It shows that humankind does not depend entirely on their technological prowess.

In my eyes, the leaders of developing countries and emerging markets failed to make full use of the diplomatic victory won in Doha in 2001. The flexibility rules were meant to ensure that patents do not stand in the way of public health. By coordinating action among one another, they could’ve ensured the development of operational mechanisms, reaping more substantial benefits from the decision that, as you just put it, remained “nice legal rhetoric”. Concerted action by regional organisations like the African Union could have made a difference too. Do you agree?
Yes, I do. I’d like to add, however, that some countries have taken action. Chile, for example, announced its intention to support the suspension of any Covid-related IP rights at the national level early on in the pandemic. In Brazil, legislators are working on similar measures. In this sense, the WTO flexibility is being applied, though that is happening without attracting much global attention at this point. That said, it is certainly true that we have not seen the kind of radical and determined action developing countries need to take to improve health care. Our leaders often prefer to blame our problems on rich nations instead of actually assuming responsibility. No doubt, the rich nations have advantages in multilateral settings, but the poorer ones are not voiceless. The US and the EU are doing a much better job at coordinating their diplomacy to promote the interests they share. African, Asian and Latin American governments should do so too. In view of Covid-19, we need determined leadership, not half-hearted exchanges at the multilateral level.

Achal Prabhala is based in Bangalore and coordinates the AccessIBSA project, a tri-continental civil-society initiative that is fighting for better access to pharmaceuticals in India, Brazil and South Africa. It gets support from the Shuttleworth Foundation.
https://accessibsa.org/team/achal-prabhala/