“We are the host society”

Diaspora organisations for Africans in Germany do valuable work helping to settle and integrate refugees and migrants. And they want politicians to recognise and appreciate the fact. However, diasporans are also hugely important for the development of their own countries of origin. 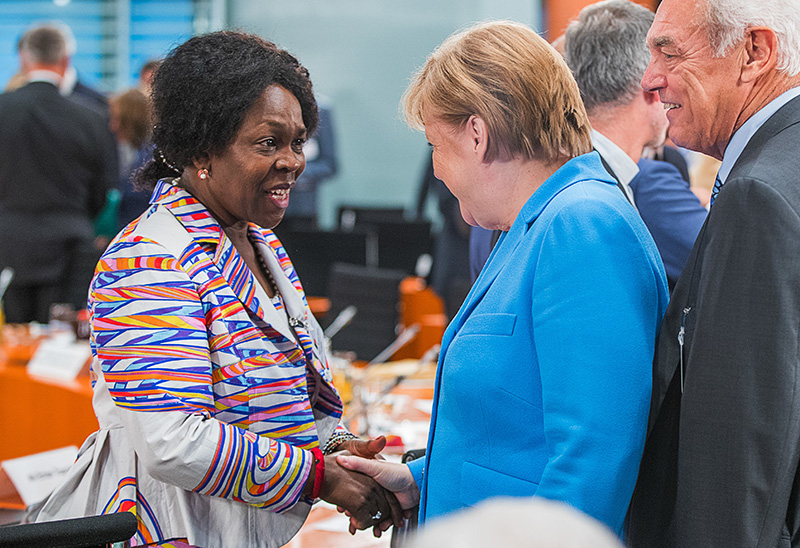 picture-alliance/Jens Büttner/dpa-Zentralbild/dpa Virginia Wangare Greiner of Maisha has the ear of top politicians: here she talks to German Chancellor Angela Merkel during the 2018 Integration Summit at the Federal Chancellery.

“People do not leave their homeland because they want to live on welfare benefits in Germany. They do so because they are desperate” – clear words from Tzehaie Semere, a project consultant at the regional development network EPN Hessen. His organisation provides advice, project development and networking for migrant and diaspora groups – with the aim of strengthening those groups and increasing their political influence.

Semere believes there is an urgent need for that aim to be addressed, in view of the growing hostility to foreigners in Germany and the gradual rise of the right-wing populist party AfD. Migrants need a stronger media voice, Semere says, and they need to talk about their ordeals, motivations and goals in life. Semere’s work is supported by many diaspora groups. One of them is Maisha, an African women’s self-help organisation in Germany.

Maisha’s general manager is Virginia Wangare Greiner, a Kenyan social worker who has been living in Germany since 1986 and was awarded the prestigious Federal Cross of Merit in 2006. She is well aware of the cares and concerns of fellow African women as well as their hopes and dreams. Today, Maisha offers advice to more than just African women on issues of migration, integration or repatriation; it also runs a humanitarian “clinic” for the City of Frankfurt, where anyone without health insurance or papers can go for help and advice.

Wangare Greiner wants to help migrants become emancipated and take their place as confident members of German society. But she also calls for more government programmes to promote migrant organisations as well as structural support in the form of premises, furnishings and equipment. She also emphasises the importance of the impact migrants have on the development of their countries of origin: “Development policymakers have only recently recognised, for instance, how important our remittances are for Africa.” According to the World Bank, those remittances have long run at three to four times the total volume of official development assistance (ODA).

With the money that is transferred home from Europe, families set up small businesses and thus support the national economy. That is not sufficiently appreciated, says Virginia Wangare Greiner: “We want politicians to acknowledge and respect us as donors.”

The support Maisha provides for migrants’ countries of origin is not just financial; the organisation also recently opened an office in Ghana to advise and assist returnees. “We offer microloans and advice to help women set up small businesses and manufacturing operations that will provide them with a livelihood.” The products the women make will shortly be sold in Germany through an online shop.

The African organisations’ fundamental message is that they are committed to fighting exclusion and racism and intend to raise public awareness of their achievements. One little-known aspect is highlighted by Tzehaie Semere of EPN: “Where do refugees and migrants go when they come to Germany?” They do not go to German families but to the families and groups of their compatriots. So, as Semere points out: “We are the host society!”