Because the health-care system in Syria is largely destroyed and international aid is insufficient, Syrian citizens have started private rehabilitation clinics in their own country, as well as in Jordan and Turkey. They offer injured people free treatment. Martina Sabra visited such a rehab centre in Amman, the capital of Jordan. 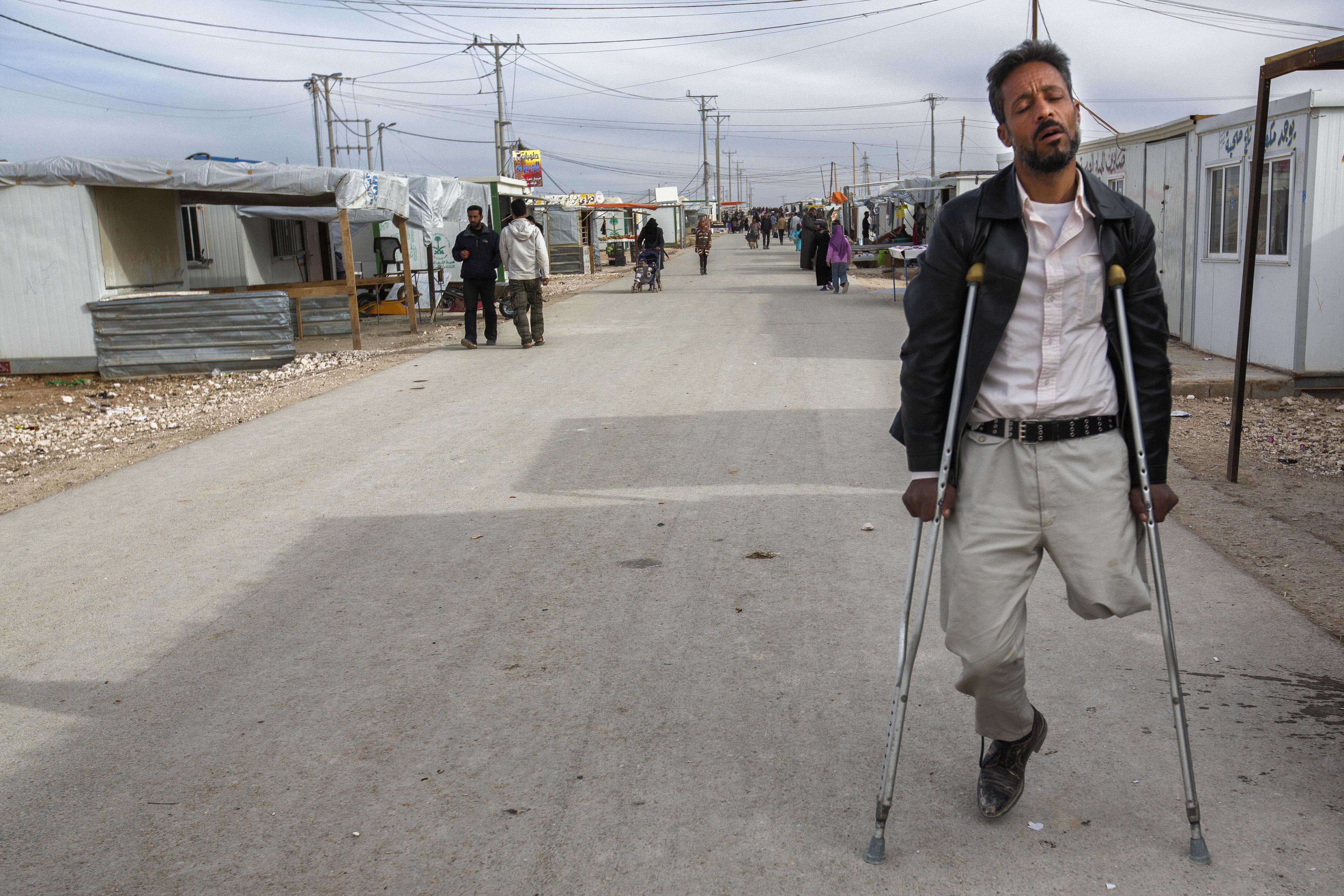 Little Rami (name changed) is sitting in a clinic room on a cot, staring blankly. The physiotherapist Basil, a tall, lanky young man in jeans and a white doctor’s smock, knows Rami’s medical history: “The little guy did not get enough oxygen at birth,” he says. As a result, Rami suffered brain damage and cerebral palsy. “Children with cerebral palsy are not necessarily mentally disabled, but they tend towards autistic behaviour, and their mobility tends to be limited,” Basil explains.

In Damascus before the war, Rami got regular physical therapy, which helped to improve his motoric skills. Because of the war, this was discon­tinued at the end of 2012. Rami’s family fled to Jordan in the autumn of 2013.

“We are doing our best to make up for the treatments he missed,” says Basil. “But that is not easy.” Rami used to live in Tadamun, a neighbourhood in Damascus that was besieged and heavily damaged. Rami was traumatised by the experience on top of his disability. When he first arrived in the rehab centre, he asked his father: “Papa, will these people beat us?”

Basil takes Rami by the arm, gives him a big hug and hums a melody. Then he puts the six-year-old on a tricycle. He shows him how to hold the steering wheel, puts his feet on the pedals and pushes him around the room, imitating the sound of a horn. After a few rounds, Rami responds. He carefully begins to pedal himself. Basil is satisfied, he has reached today’s goal.

Rami is the youngest patient in this rehab centre in Amman. It is run by a non-governmental organisation called Syrian Women Across Borders. People such as him are invisible victims of the war in Syria. Rami was not hurt by a bomb or street fighting. But the destruction of broad swathes of the Syrian health-care system, carried out largely on purpose by the Assad regime, means that not only those who are injured now lack care. Many chronically ill and disabled people no longer have access to essential medical treatment.

In general, medical facilities are appropriate in the countries to which the refugees have fled. However, many Syrian patients do not have the money to pay for the health services they urgently need.

The UN refugee agency is supposed to help to take care for them, but despite huge efforts, the agency still faces considerable capacity gaps. Socially-active, exiled Syrians are doing their best to step in. They started private rehab centres for injured and disabled refugees. Both as stationary and outpatient care is provided.

Rami is being treated in such a centre. The special thing about the centre is that it was founded by five women. One of them is Samara Atassi, who is 31 years old and the mother of two children. She was working in Homs as a pharmacist when the Syrian revolution began in 2011. “The situation became ever more dangerous. The regime viewed doctors, nurses and pharmacists mainly as enemies, because they could help injured rebels and government opponents.” She reports that many of her colleagues and friends were arrested; others disappeared and never returned. “I was very fearful,” she says.

Samara Atassi fled to Jordan with her family. In this country, she is not allowed to work, so she became a volunteer. Through Facebook she contacted friends and drummed up a core group of five women. At a meeting in Amman they decided to work specifically for the war-wounded and women refugees. “We consciously chose not to provide emergency care, but to create a sustainable and permanent development project, with which we will be able to contribute to the reconstruction of Syria later,” Samara Atassi says. “That is why we came up with the rehab centre for physical and psychiatric rehabilitation.”

That was at the end of 2012. Since then, the Syrian Women Across Borders rehab centre has become a household name for Syrian exiles in Amman. It is funded through large and small donations from around the world. Apart from the rehab centre, the group runs a women’s cooperative and offers homework tutoring for high-school kids. For these purposes, Atassi and her group have rented a large apartment house with several floors in a middle-class neighbourhood.

Manar Al Bustani is in charge of fundraising. He is an English teacher from Damascus who is currently working in the United Arab Emirates. “Sometimes things are very tight,” he says. “Merely renting the building costs € 3,000 a month. But so far, we have always been able to mobilise enough contributions.”

What is everyday life in the rehab centre like? Muayyed, a male nurse, invites me to join him for a few hours one morning. He is 29 years old, married and has a university degree. A few months ago, he fled to Jordan with this wife and child. Being a refugee, he is not allowed to work, so he acts as an intern and is supported by a donation.

He would prefer a regular job, he says, but he is happy to be active in his chosen profession and doing something for his people. “We mainly treat patients with spinal injuries or head and brain injuries, which were caused by grenade shrapnel or bullets,” he explains. Three other patients are currently under treatment after their arms or legs had to be ampu­tated. Yet others were shot in the stomach or suffered bullet wounds to internal organs.

“I am not sure whether these injuries were inflicted strategically. The regime has conducted an enormous number of air raids, and it relies on masses of snipers,” says Muayyed. The health-care system is in ruins in much of Syria, so lots of injured people do not get timely care. Many do not get professional treatment at all. Consequences include many complications and an above-average number of amputations and cases of permanent paralysis. “We estimate that, by now, about a million people have suffered injuries and half of them will be permanently disabled,” says Muayyed. The World Health Organisation (WHO) estimates that there are four to five injured people to every death in armed conflict.

During his shift, Muayyed is in charge of 18 male patients. He is a well-trained professional. In Syria, nursing and physiotherapy are professions that require university degrees. Before he fled in the spring of 2013, his job was to teach nursing students.

However, Muayyed admits that working with injured war refugees is a huge challenge. “We were trained to deal with sports and traffic injuries. War traumas are far more complicated. Normally, we would need special training for these wounds.”

International experts who understand the particular needs of Syrian war victims share this view. Handicap International, an international NGO, and others offer further education for physiotherapists in Jordan, but access is mostly limited to people with regular employment. Most Syrian physiotherapists in Jordan are registered as refugees, however, so they are not allowed to work and hardly get training opportunities.

Besides physical rehabilitation, the rehab centre of the Syrian Women Across Borders also offers psychological counselling. Both the patients and the staff benefit. They all have to cope with grief, feelings of powerlessness and a lack of future prospects.

At daytime, Basil’s sense of humour helps to keep everyone in good spirits, but he is haunted by nightmares every night. He cannot forget what he witnessed while working in the hospital in the weeks before he fled Damascus. He remembers a refrigerated truck full of corpses that was parked in the courtyard and guarded by armed secret-police agents. It stank horribly, and the agents made jokes about the dead.

Amer Hafez is a doctor who is similarly struggling with traumatic memories. The slightly stocky man in his late forties is the rehab centre’s medical director. Hafez had a clinic for dentofacial surgery in Syria. After the revolution began, the secret police broke into his apartment one night. The agents blindfolded him and took him off to a torture centre, where he experienced harrowing scenes. He was released by accident and immediately fled with his family.

His clinic no longer exists. Shabbiha, the Assad regime’s terror militia, destroyed everything after he left. Hafez hopes that he will once again run a clinic in Syria. But for now he is happy to have escaped the inferno and to be working in his profession.

The rehab centre has accepted more than 120 pa­tients to date. Many have learned to walk again and are reintegrating themselves into society. However, humanitarian aid in itself is not a solution, Amer Hafez points out. “This unparalleled human catastrophe concerns the entire world, and we hope for the greatest possible support. But I also would like to tell Germans: we don’t want a temporary solution, no political first aid. The regime has to go. The problem must be tackled at its roots, otherwise there will just be more dead and injured.”

At the moment, an end to the conflict is not in sight. No one can say whether Syria even has a future in its old borders. The only thing that is clear is that hundreds of thousands of Syrians are afflicted and depend on outside help.

Samara Atassi thinks Syrian society will have to rethink how it treats disabled people. Traditionally, the conservative, Islamic-oriented Syrian society has focused on sympathy and charity for disabled people. This will no longer be enough. Disabled people will need to be given respect and rights. “I don’t like the term disabled or people with special needs. That is a way of pigeon-holing people,” says Samara Atassi. “We are people like them and they are like us. We have to ensure that our society enables all citizens to lead a life of self-determination.”

Martina Sabra is a freelance journalist and development consultant.
martina.sabra@t-online.de