Masses of Rohingya have fled to Bangladesh from Myanmar. The most they can hope for is humanitarian aid in dismal refugee camps. The international community is not paying adequate attention.

contributed to D+C/E+Z in spring 2019 as a PhD candidate at the Faculty of Law, University of New South Wales. 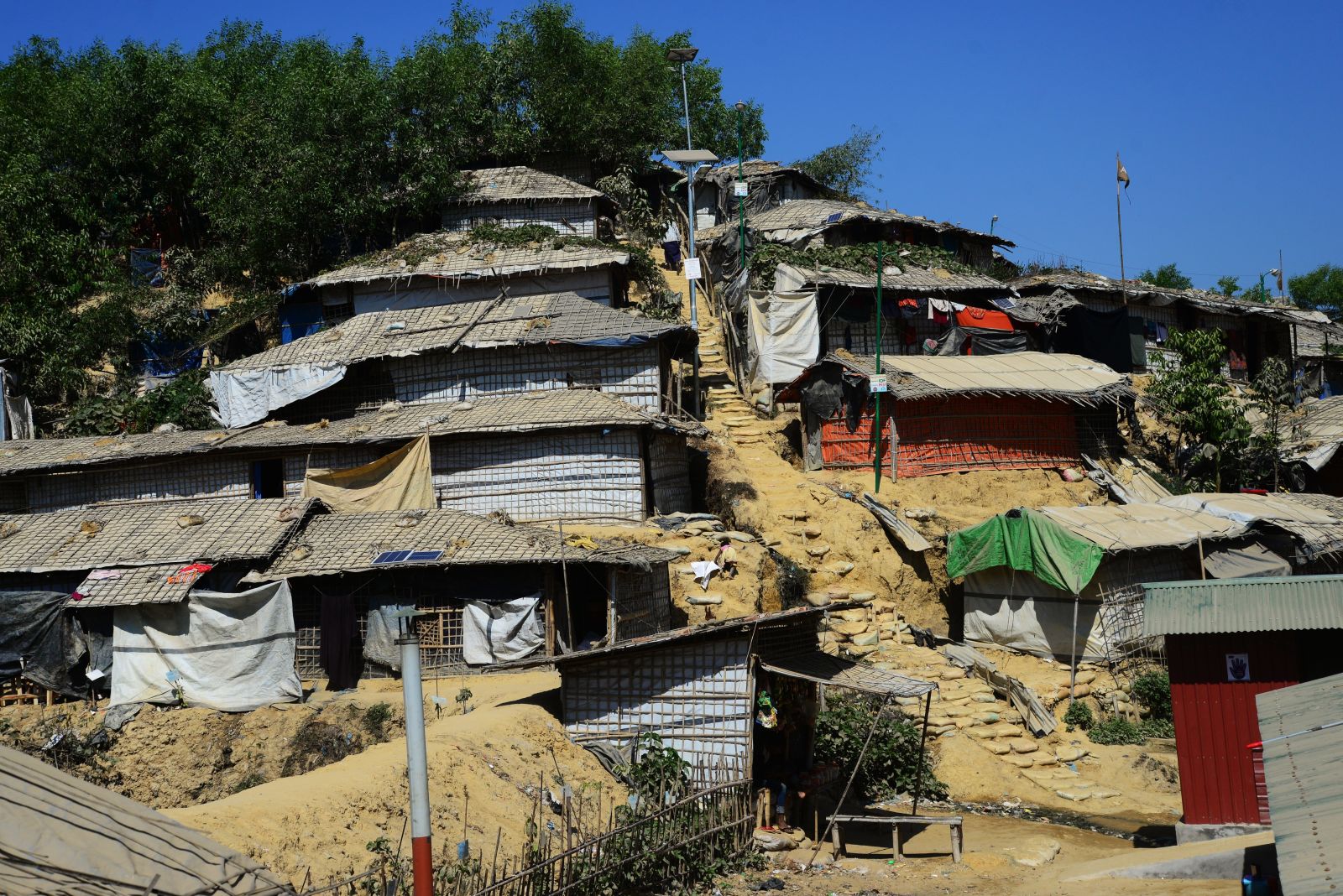 In terms of the number of refugees, Bangladesh is one of the world’s top ten host countries. Since August 2017, arrivals of Rohingya refugees has dramatically escalated. Those who make it across the border escape persecution with genocidal dimensions (see box). When the refugees arrived en masse – hungry, exhausted, traumatised and even wounded – thousands of local volunteers flocked to the border with food, medicines, clothes and other life-saving materials. They saved human lives even before international aid arrived. Unfortunately, resentment has since increased.

Refugee camps have grown huge in the country’s south-eastern districts, causing immediate damage to the local environment. Lush-green hills have turned barren. They were cleared, first for shelter and then for fire wood. Supplying drinking water for masses of people is also taking a toll on the environment, and proper sanitation remains a challenge.

Host communities initially welcomed the refugees, but later frustration took hold and socio-economic tensions keep growing. In some places, the refugees outnumber local people by a 2:1 ratio. To some extent, international aid efforts are addressing some of the relevant issues. Local youngsters have found jobs working for non-governmental agencies in the camps. Nonetheless, the majority of the local people suffer serious hardships. The prices of food, other commodities and housing have skyrocketed, forcing many locals to move away. Those who remain worry about their livelihoods, property and environment. They increasingly blame the refugees for their plight.

The government is playing the key role in administering the camps and providing assistance to refugees, though its preferred term is “forcefully displaced Myanmar nationals” (FDMN). Bangladesh is not a party to the 1951 Refugee Convention and its 1967 Protocol. Nor does it have a domestic law specific to refugees and asylum seekers. Therefore, administrative bodies are largely free to decide as they please.

Civil-service officers and the security forces are implementing government policy. The lead agency is the RRRC (Refugee Relief and Repatriation Commissioner). It is cooperating closely with UN agencies as well as with hundreds of international and Bangladeshi non-governmental organisations.

The government insists that the refugees must return to Myanmar. Its diplomats are told to convince the international community of Myanmar’s duty to take them back. In November 2017, Bangladesh signed a bilateral agreement with Myanmar for voluntary repatriation of the Rohingya. The repatriation was due to start in January 2018, but was delayed. In November 2018, the attempt to begin repatriation failed as well. In Bangladesh, refugees protested, whereas Buddhist monks rallied against repatriation in Myanmar.

The refugees demand that Myanmar must grant them “full citizenship” and recognise the  Rohingya ethnic identity. Otherwise, they refuse to return. The Myanmar government, however, denies that the Rohingya are its citizens. It wants to settle them in so-called transit camps and reception centres. Facilities for internally displaced Rohingyas were established in 2012. Some 120,000 Rohingya live there – in a situation of marginalisation, exploitation and lack of opportunities. They are denied equal rights. For good reason, refugees in Bangladesh fear they would share that fate after returning to Myanmar.

In the meantime, the Bangladesh government has begun to look for alternative strategies to house the refugees. In a particularly ambitious plan, it has built camps on Bhasan Char, a previously uninhabited delta island. It has only recently emerged from the sea and is vulnerable to cyclones. Though the government has made significant investments in embankments, refugee leaders and human-rights group warn that the relocation will lead to disaster. What they find most worrisome is that the island could serve as a prison-like settlement. They fear that refugees will be interned there.

The pressure on Bangladesh is further exacerbated by the forced deportation of Rohingya from India and Saudi Arabia. Currently, about 40,000 Rohingya refugees are living in improvised camps and urban slums in various parts of India. Increasing harassment by police and Hindu nationalist groups forced about 1300 of them to cross the border into Bangladesh in January this year.

Saudi Arabia was long considered a safe-haven, hosting an estimated 200,000 Rohingya. Many of them have fake Bangladeshi passports. Saudi Arabia has begun to sort them out and deport them. Several dozen arrived this way in Bangladesh in recent weeks. Bangladesh’s government had not objected by mid-March, when the manuscript was finalised. In its eyes, Saudi Arabia is an important ally.

It is unfortunate that the international community has largely failed to ensure justice for the victims of atrocities committed by Myanmar. Nor has it done anything serious to create a safe environment in Myanmar so refugees could return to the country. The problem is that major world powers are playing politics in pursuit of anarrowly perceived national interests.

China, Russia and India are basically siding with Myanmar. China and Russia have vetoed measures several times at meetings of the UN Security Council. Bangladesh’s government is interested in good relations with these countries.

In an unprecedented move, the International Criminal Court (ICC) ruled that it has jurisdiction to investigate the crime of deportation of Rohingya people from Myanmar (a non-member state) to Bangladesh (a member state). For the first time, the ICC is considering a case against a non-member state without referral from the Security Council. However, it is not clear that it will do much. Big global players – including the USA, Russia, China and India – are likely to do their best to stop the case. They do not want an international norm to take hold according to which they themselves might one day be held accountable for similar acts.

While the ICC considerations are at least putting some international pressure on Myanmar, that country’s government remains defiant. Not only is it still carrying out atrocities against Rohingya Muslims, it has also started to target some ethnic minorities who are predominantly Buddhist. Some of them have reportedly fled to Bangladesh.

On the positive side, Bangladesh deserves praise for not having so far forcibly returned any Rohingya to Myanmar, where their lives would be in danger. However, it is increasingly obvious that mass repatriation will not happen soon. Accordingly, a sense of frustration is not only growing in the government sector but also – most alarmingly – among local communities.

Problems are compounded by the government’s recently launched “war on drugs” (see Hoque and Shamin in focus section of D+C/E+Z e-paper 2018/12) Bangladesh’s south-eastern districts are notorious entry points for illicit narcotics. Along with locals, desperate refugees are being used as drug-mules. Nearly a dozen Rohingya people have already been killed by security forces. Another big problem is human trafficking. Refugee teenagers and children are targeted in particular.

The Rohingya refugees in Bangladesh are largely left to their fate. The most they can hope for is camp-based humanitarian assistance. At least temporarily, their lives are saved. What is being neglected, however, is education, housing, human rights and socio-economic development for the Rohingya community.

Ridwanul Hoque is a law professor at the University of Dhaka.
ridwandulaw@gmail.com

Ashraful Azad is a PhD candidate at the Faculty of Law, University of New South Wales. Both authors have experience with working with Rohingya in camps.